Home General Matthew McConaughey is flirting with a run for governor. But his politics... 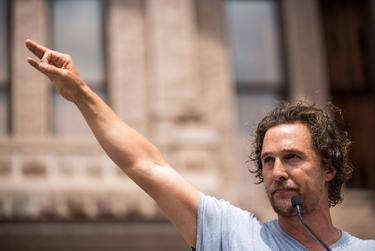 The Austin-based actor Matthew McConaughey is again making headlines for flirting with a run for Texas governor — and this time he says he is serious about the possibility.

Belying the hubbub, though, is something activists have increasingly buzzed about: Little is known about McConaughey’s politics, or at least his partisanship.

State voting records show he hasn’t voted in a Texas primary election since at least 2012, which could give some inkling as to which party he supports. He has not made any campaign contributions. And he has declined to say whether he would run as a Democrat, a Republican or something else.

There, of course, could be appeal in the lack of political background, and McConaughey has spoken openly about being disillusioned with the current state of politics, suggesting last year that it is a “broken business.” He also has criticized the excesses of both the left and the right, and encouraged an “aggressively centric” mindset.

But for partisans looking to suss out McConaughey’s true leanings as the 2022 election cycle gets underway, there is not much to go off. That is especially true for Democrats, who are eager to challenge GOP Gov. Greg Abbott over his handling of the coronavirus pandemic and winter weather crisis but lack a deep bench beyond Beto O’Rourke.

McConaughey has voted twice in Texas since 2012 — in the 2018 and 2020 general elections, according to his latest voter history file with the secretary of state’s office. He voted early both times — in person in 2018 and by mail ballot in 2020. His registration in Travis County goes back to Nov. 25, 2012, and does not preclude the possibility that he was previously registered in Texas and fell off the voter rolls.

When it comes to campaign contributions, there is no record of him giving at the state or federal levels.

He did not say much about the latest election — though he made headlines afterward, when he criticized the “illiberal left” for taking an arrogant view toward the “other 50%.” He suggested that view led some in Hollywood — a strongly Democratic constituency — to deny Donald Trump’s win in 2016, and now some Republicans were denying Trump’s reelection loss because “they’ve been fed fake news.”

McConaughey has been fielding questions about running for governor while promoting his memoir, “Greenlights,” which published in October. In the book, McConaughey did include a handful of glimpses at the politics he was around growing up. Early on in the memoir, McConaughey said he came “from a long line of rule breakers,” describing them as “outlaw libertarians who vote red down the line because they believe it’ll keep fewer outlaws from trespassin on their territory.”

But he steered clear of discussing politics — recent presidents and elections, for example — or including details about his personal political views.

A publicist for McConaughey did not respond to requests for comment for this story.

McConaughey’s’ recently released book is not the only thing keeping him in the public spotlight these days. He is organizing a virtual benefit concert for Texans affected by last month’s deadly winter storm, set to be broadcast Sunday on his YouTube channel.

McConaughey initially sparked rumors he could run for governor last year when he left open the possibility in a November interview with conservative radio host Hugh Hewitt. But a day later, after his Hewitt interview received wide media coverage, McConaughey seemed to dial back the speculation about a gubernatorial bid, telling late-night TV host Stephen Colbert that he has “no plans to do that right now.”

But McConaughey ramped up speculation once again last week, when he said in a podcast interview that running for governor is a “true consideration.” He followed it up with an interview with NBC News’ Al Roker, from the lawn of Texas Capitol, in which he reiterated he was thinking about a bid.

Some interviewers have specifically asked McConaughey if he would run as a Democrat or a Republican — or something else — and he has not played ball. Questioned Thursday about his partisan affiliation if he runs for governor, he told the Austin American-Statesman he has not “gotten that far yet.” In an interview published the same day by the Longview News-Journal — McConaughey partly grew up in the East Texas city — he also shrugged off a question about partisanship.

“I think, going in, to think Democrat or Republican or one of the other, is small thinking now and even becoming unconstitutional because you’re supposed to serve the American people or the people of your state,” McConaughey said.

Independent bids for governor are not unheard of in Texas. In 2006, former Comptroller Carole Keeton Strayhorn and songwriter and humorist Kinky Friedman both ran as independents. They finished third and fourth in the race behind Republican Rick Perry and Democrat Chris Bell, but combined to bring in more than 30% of the vote.

So far, the biggest question hanging over the 2022 gubernatorial race involves a Democrat: O’Rourke, the former 2020 presidential candidate, El Paso congressman and 2018 U.S. Senate nominee. O’Rourke has said he is considering challenging Abbott, while offering harsh criticism of the governor’s responses to the pandemic and winter storm.

The McConaughey-O’Rourke relationship is one of growing fascination in political circles, if only because they are by far the two most recognizable names being discussed as potential gubernatorial candidates.

McConaughey was photographed posing with O’Rourke and two other people while O’Rourke was running for U.S. Senate. As early voting was underway in that race, he tweeted a video of himself in line at a polling place, encouraging people to get out and vote. And about a year later, McConaughey crossed paths with O’Rourke at a 2019 benefit concert for the victims of the El Paso Walmart massacre.

Then again, McConaughey has also teamed up with Republicans, albeit on causes that similarly are not overtly political. In 2018, he appeared alongside Attorney General Ken Paxton in a public service announcement about ending human trafficking. More recently, he lent his voice to another PSA, this one released by Abbott’s office, that urged Texans to stay home if they could as the pandemic escalated in the state last spring.

When it comes to more politically sensitive issues, McConaughey has treaded carefully. Take, for example, the push to “defund the police” last year after the death of George Floyd, the black Minnesota man who was killed after being pinned down by an officer. Asked about Austin’s response to the “defund the police” movement, McConaughey told podcast host Joe Rogan in October that it’s “almost like it should’ve been renamed because ‘defund the police’ does not sound anything like there’s been money reallocated to different areas.” He said the community and police “need to get back together” and better understand the unique challenges each face. And on police specifically, he said there are “a few of these bad apples [that] need to be removed, but we need to make sure we’re training them better.”

He ultimately landed on a skeptical position, saying his “first gut instinct [about defunding the police] was I don’t see how that repairs the relationship between the community and the police force.”

“We’ll see how it works, but I’m more for saying, OK, instead of taking away your money and your funds, which you can use to train better and work on the relationship of what your job is and what you expect and what communities expect from you — I’d rather have done that than pull money from ’em,” McConaughey said.

In the same interview, McConaughey offered a more direct position on another hot-button issue — gun control — saying it is “too easy to get a gun sometimes, that there should be that background check.”