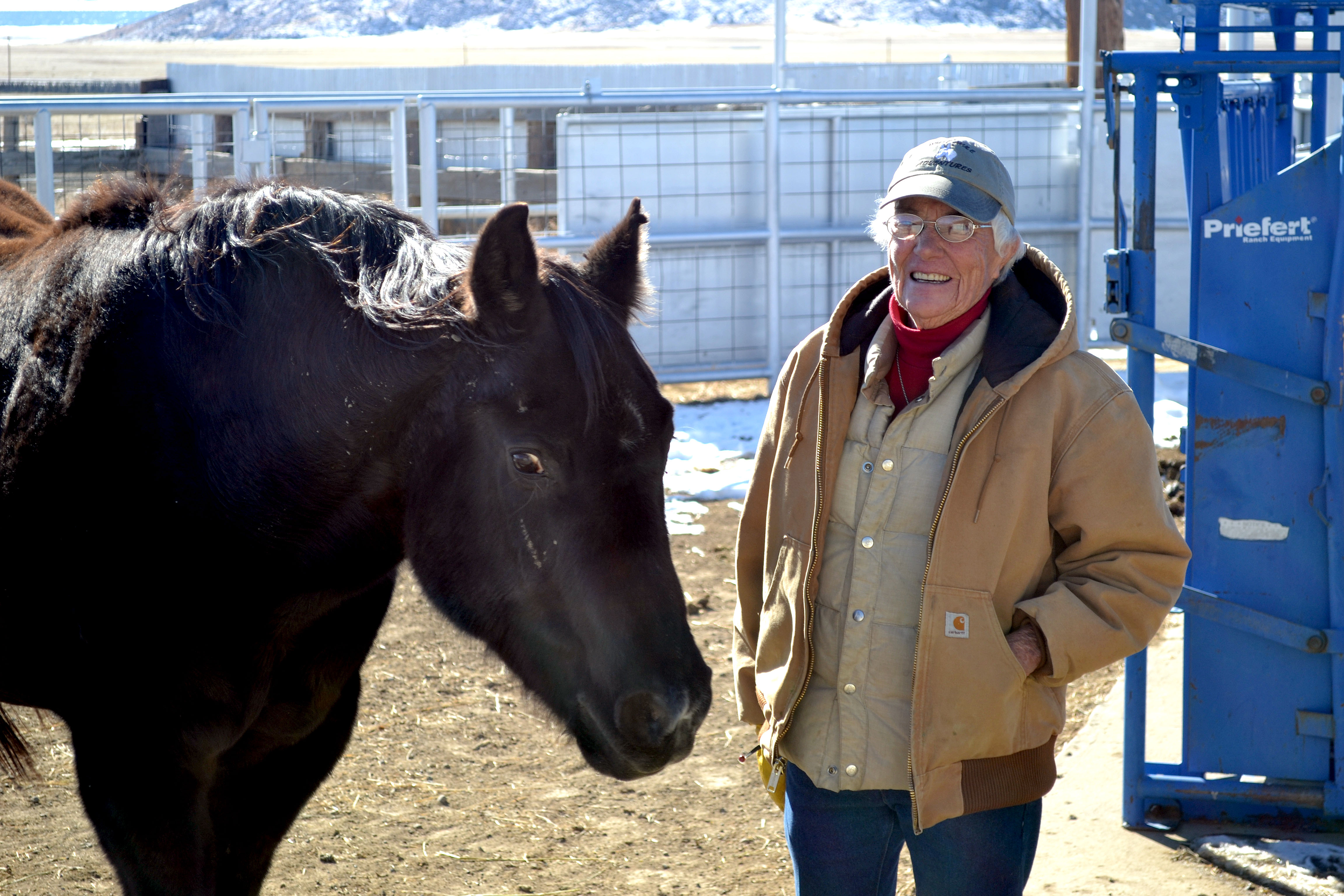 Above: Margaret Heringa on the Cross Diamond Ranch near Raton, New Mexico.

It is suiting to the owner of the Cross Diamond Ranch that her land would sweep up to the commanding Johnson Mesa. Like her land, the borders of Margaret Smith Heringa’s life aren’t defined by easily plotted precise angles. Her life’s topography, and that of her land, is anything but flat.

The Cross Diamond Ranch spreads to the north of U.S. Highway 87, about five miles east of Raton, New Mexico. A blue roof tops Margaret’s modest house, a replacement for the 22-foot travel trailer she lived in for several years after moving from the Heringa Ranch in 1993. The Johnson Mesa fills the windows of her small dining room, a backdrop for a landscape that like Margaret, is rugged yet beautiful. Margaret’s countenance is a mirror of the mesa; both have been refined by erosion. Thousands, if not millions, of years of weather have removed the softer layers of the mesa, revealing the unyielding rock visible today. Eighty-three years of life have laid bare the formidable bedrock of Margaret’s character, so evident in her bearing.

Donny and his wife, Margaret’s oldest daughter, Loretta, moved to the Cross Diamond in 2010 from Clayton, New Mexico, to help Margaret run the ranch. He retired from the U.S. Postal Service, and Loretta is a retired nurse. Loretta grew up on the Heringa Ranch near Mt. Dora, New Mexico, property that had been in her father’s family, so she had some training of how to manage a ranch.

“I wasn’t raised in the business,” Donny said. “It’s an adjustment for someone who was raised in town, but I’m learning.”

“He does a great job,” Margaret said.

Loretta’s arrival at the Cross Diamond marks the fourth generation of her family to run cattle on the land, although no one had lived there until Margaret moved her 22-foot travel trailer to the ranch. Margaret’s land is part of the larger McAuliffe Ranch that was divided among Timothy McAuliffe’s heirs.

“He was my mother’s dad,” Margaret said of Timothy. “He came to Raton in 1879 with the railroad.”

Timothy was born in Ireland in 1857 and immigrated to Canada where he worked in the mines. He then traveled south to St. Joseph, Missouri, where railroad workers were being hired.

“He worked for the Santa Fe (Railway) coming out, and when he got to Raton, he said, ‘This is where I’m going to stay,’” Margaret said.

Timothy arrived in Raton at the city’s inception. In 1879, the year Timothy decided he had found a place to put down roots, the Atchison, Topeka and Santa Fe Railway bought a local toll road and established a busy rail line. A year later, 320 acres for the Raton town site were bought from the Maxwell Land Grant. Raton developed as a railroad, mining and ranching center for the northeast part of the New Mexico Territory.

“My granddad was single when he came here,” Margaret said. “He saved his money and bought a saloon in Raton. Then he decided his customers needed something to eat, so he got into the cattle business.”

Timothy married a woman with a fantastic name, Virginia Angeline Penelope Profitt Gillespie, in 1882, and they had three daughters, Florence, Altie, and Addie May.

“Addie May was my mother,” Margaret said.

Timothy continued to buy land, and by the time his daughter, Addie May, married Earl T. Smith in 1922, Timothy had assembled a 42,000-acre ranch that was flung south and east of Raton. The land that would become the Cross Diamond Ranch is part of it.

Margaret’s father, Earl T. Smith, was a railroader, and it was his love, Margaret said.

“We’d go down to see all the engines, and we’d get on all of them that appeared.”

As much as Earl loved the railroad, he transitioned to the ranching business. He and Addie May bought more land, adding it to the property Timothy left to them when he died of pneumonia in 1932. When Margaret and her sister, Virginia, were in high school, their parents gave them part of the ranch, strengthening the family’s bond to the land into the third generation.

“I was my dad’s shirt tail,” Margaret said. “He’d get up bright and early, and if I heard him I’d ask if I could go. He’d say, ‘OK,’ and we’d go off to check on cattle and fences. If I got tired, I’d just fall asleep in the seat of the truck.”

Margaret learned to drive a team of horses, and when World War II broke out, she pitched in to the ranch work even more, even though she was barely 10 years old.

“My sister and I were taught to work,” she said. “We didn’t sit around and whine. I read a lot as a kid, and I was a tomboy. I confused my mother a lot. She tried to teach me to be a lady. Some of it rubbed off, and some of it didn’t.”

Margaret graduated from Raton High School in 1949 and then from Loretto Heights College in Denver. While on a picnic, she met John Heringa, a rancher from Mt. Dora, and they married in 1955. Their three daughters were raised on the Heringa Ranch.

“We had a wonderful, beautiful ranch,” Loretta said. “We learned to ride and work cattle. I read lots of books, and we entertained ourselves. It was a wonderful, free life.”

In later years, Loretta’s sister, Judy, took over the operation of the Heringa until 2008. Loretta took over the management until it was sold, and Margaret plunged into the task of strengthening the Cross Diamond into a strong business.

“In the beginning, I was running 400 head,” she said. “I was doing it by myself, but when I needed some help, I’d get some good day workers.”

At 83 years old, Margaret still works cattle, but she’s turned over the reins of the ranch’s management to Loretta.

“This is where I wanted to be,” Loretta said. “Donny and I knew Mother needed help, but coming here has always been my dream. Donny was gracious about the decision.”

“I haven’t been sick much in my life, but now I have COPD, I can’t hear and my eyes are going,” Margaret said. “I’m not very graceful in accepting it. I get grouchy. I used to like to clean house, but I’m lousy at it now. I don’t see cobwebs, and I don’t see dust.”

Accustomed to trucking up to the hills to cut her firewood with a chainsaw, Margaret lets Loretta and Donny help her with the chores that can challenge an 83-year-old woman, even one as tough as Margaret. She was convinced to hang up her chain saw after she bounced it off her thigh.

“It was just a flesh wound,” Margaret said.

When Margaret moved to the Cross Diamond, the only structures on it were some “old-fashioned dilapidated corrals,” as she described them. Today, pipe corrals, drift fences and comfortable houses are the evidence of Margaret’s grit. She inherited land, but most important, she inherited the fortitude to do something with it.

“She moved cattle by herself with her dog,” Loretta said. “But she worked smart, so you don’t hurt yourself. I admire her wisdom and courage and how she gets the job done in the healthiest way possible. For the most part, we do things her way. It’s practical, and she has a lot of knowledge. I love tapping into that knowledge.”

“A calm and slow pace doesn’t worry them,” Margaret said. “You go at them gently and talk to them.”

There is one tradition Loretta isn’t eager to embrace, however.

“Mother still makes her cowboy coffee on the stove,” she said. “I don’t really like having to spit the grounds out.”

The aluminum coffee pot with the glass knob on top holds a place of honor on Margaret’s stove.

“I get up at 5:30 in the morning and the put the coffee on,” she said. “And I drink the pot dry. I turn on the TV to see what the weather’s doing and to see if there are any disasters I need to know about. Then I get dressed and make my bed and go out and feed my horses. I don’t feed them until the sun starts coming up.”

The Cross Diamond is “wild country,” Margaret said. “You got your brush and your flat land. There are big canyons and arroyos. I see God’s creation and beauty here. How can you look out there and say some human did that? God did it.”

The wildness has been tamed enough to run cattle on the ranch, but Donny and Loretta said they marvel at what is still rugged beauty.

“You can hear the elk bugling,” Donny said. “You get closer to the animals out here.”

Loretta said she hears the eagles flying overhead and sees the hawks and coyotes.

“The stress I used to have working as a nurse is so much less now,” she said. “I’m delighted.”

Donny and Loretta have a son and a daughter who will eventually become part of the Cross Diamond.

“We encourage them to finish their careers,” Loretta said. “Ranching isn’t always profitable, but we’re going to preserve the ranch and the history so we can pass it on to our children.”

Donny said each generation holds the ranch for the next.

A bookmarker that’s holding the place between the fourth and fifth chapters of the Cross Diamond Ranch.