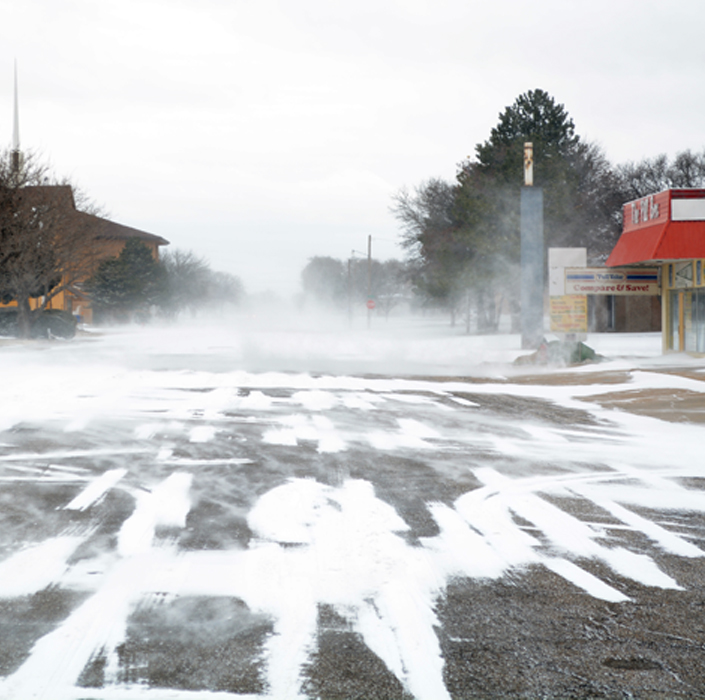 Above: Only blowing snow is moving down Bliss Avenue on Sunday as people are taking the advice of officials wh0 warn of hazardous driving conditions. Moore County didn’t get the predicted up to 15 inches of snow, but forecasters say another storm is approaching.

Dry air that wrapped around the expected band of heavy snow stopped much of it from reaching the ground, saving Moore County from the predicted blizzard, but forecasters say the area isn’t out of trouble yet.

“A new band is forming south of Lubbock, and if it holds together, we could still see some heavy snowfall,” said Mike Gittinger, a meteorologist with the Amarillo National Weather Service.

Counties to the south of Moore County didn’t dodge the winter bullet, Gittinger said, with Hereford getting about 5 inches of snow, and Lubbock and Midland seeing as much or more. Muleshoe and Friona have reported up to a foot of snow. Accumulations for Dumas aren’t available because the high winds created inconsistent patterns, Gittinger said.

“It’s difficult to measure the snowfall because we don’t know how much of it the high winds blew away,” Gittinger said. “But it’s possible Dumas could get another 1- to 4-inches of snow. The new band that’s forming is several hours away, and Moore County is right on the edge of it.”

The brewing storm is expected to last until about sunrise Monday, and Moore County Emergency Management Tim Nicholson said although no roads have been closed, driving conditions remain hazardous.

Moore County residents began bracing themselves for a storm that was predicted to drop up to 15 inches of snow and create high snow drifts, and while those storms aren’t yearly occurrences, the Panhandle has seen its share of them. Among several blizzards that caused multiple fatalities, the one that hit the area in March 1957 was one of the worst. According to the National Weather Service, that blizzard formed 30-foot drifts and killed 20 percent of the Panhandle’s cattle population. The conditions created by up to 20 inches of snow killed 11 people, and it reduced visibility to zero.

On February 25, 2013, another major snowstorm hit the Panhandle, accompanied with winds measured up to 75 mph. The National Weather Service reported 2 to 3 inches of snow fell per hour, building up the 19 inches of total accumulation in Amarillo. Rick Husband International Airport was closed most of that day, and it was the largest snowfall event for a single day in the month of February.

Gittinger said it’s not certain how much more snow can be expected Sunday, but he cautions people not to think the storm has passed.