Home OPINION Looking for shame to buy or borrow. Can trade something of equal... 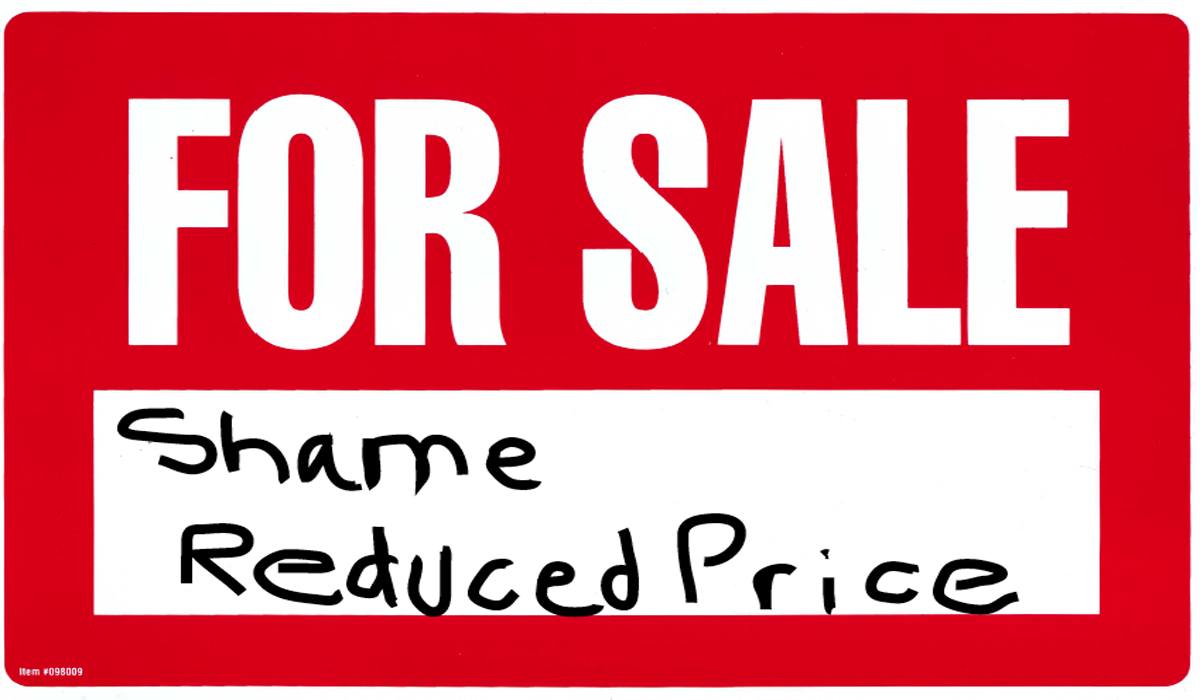 I have conversations with myself. I used to have them out loud, but that led to several lawsuits and a few restraining orders, so I had to corral them into the soundproof walls of my brain. Apparently it’s one thing to think about knocking the tar out of someone, but it’s quite another to say it. Excuuuuse me, Mr. Sensitive.

It’s not easy keeping those conversations to myself. Have you been inside my brain? I’m a mental hoarder, and if you’re ever spent more than two seconds talking to me you know how easily all those thoughts can spill out. The door is bulging, straining against the chains strong enough to pull a ship out to sea but snap like pretzels the minute someone says hi to me. Smart people duck their heads and turn the corner when they see me coming. Others have been known to throw themselves in front of speeding cars to avoid the avalanche of pent up conversations and thoughts I’ve stored during the previous five minutes. I don’t know why. I remember people being enthralled with me at the last party I was invited to back in 1973.

Now these conversations I have with myself, they’re not crazy ones like, “Steve, put down that fork and go to the gym.” Or, “Steve, the phone you have is fine. Walk away from that $1,000 ripoff. Yes, it’s shiny and pretty, but put it down.” No, nothing like those conversations because those would be insane and cause for concern and medication. No, the conferences in my head are engaging and worthy of being printed if only I could get the judge to let me open my mouth again. Geez Louise. You say something one time, and all of a sudden you’re in court for slander. I’m thinking of switching to the Republican Party where you can say anything you want and get paid millions of dollars for doing it. I’d be a billionaire.

Most of my ruminations with myself occur during the night as I’m winding down and getting ready for sleep. The dogs are snoring, the gunfire across the street isn’t as frequent, and the world is at peace. Except in my head. The synapses are firing like it’s the Battle of Stalingrad, and I’m arguing about what happened to that snow cone maker I had when I was 5 years old and then in a nanosecond switching to a remark someone made the other day, telling me I have no shame. Now if you’re wondering how I went from the snow cone maker to an incident 50 years later, I just don’t have it in me today to explain the functions of an intellectual mind. Get a book.

So I put the snow cone maker on the back burner, making a note to get back to it and focused on the comment that I have no shame. I gave it serious consideration, even tapping my chin with my forefinger in that way that shows I’m really concentrating like you do when someone asks you do you want the pie or the cake. A little advice: take both. But the shame thing really sent the brain pistons to pumping, and I couldn’t wait until 10 a.m. to jump out of bed and see about getting me some shame. I know, I know. What am I doing getting out of bed so early? There’s a world to conquer, people, and the sluggards are going to be left with the crumbs. I can see I’m going to have to explain everything to you.

I was out of bed the minute the sun was almost straight above, and I started looking for the shame I was certain to have had at one time and probably misplaced or stored out of sight, like I did those pictures of me in the ’80s wearing parachute pants. That shame had to be somewhere in the house. I looked under the bed. Nope. Sometimes the dogs drag things under there, but not this time. In the medicine cabinet? Probably not. Shame seems like a big thing the way people carry on it about, and it wouldn’t fit in the medicine cabinet. I wasn’t even looking in the closet. Darlin’ ever since I came out of that thing years ago, I ain’t a openin’ it again.

So what to do? Then it came to me. I’d go buy some. Surely, some store in town had some shame on a shelf, hopefully on sale, and if I could find a coupon and a rewards card I could probably get it dirt cheap. By now I’m excited. I was gonna get me some shame, and at the pace I was going, I’d probably have it by noon.

I ruled out Walmart because even a ninny like me knows they have no shame, for sale or otherwise. Now where? The U.S. Capitol? Fresh out. North Carolina? They ran out months ago. Then it hit me. I should have stayed at home and looked online. Even hard-to-find products like pictures of Donald Trump getting a haircut can be found somewhere online.

I entered “How much does shame cost” in Google, and they responded like I don’t know what I’m talking about. “Did you mean: how much does shamu cost?” Oh, mylanta. Obviously, Google doesn’t want me to have any shame and was going to make it difficult. Halfway down the page, there was a headline that said, “The cost of sexual shame”, but I had no interest in reading about Ted Cruz’s private life, so I moved on. How about QVC? SkyMall? I was still making payments on that wine glass holder necklace, but maybe they would up my credit. I entered “shame” in their search, and it came up they were out. Johnny Manziel had plum cleaned them out of shame. Not a lick of it left.

Now, I was getting worried because the way those people were talking about me, it sounded like I needed to get me some shame right damn now. They were carrying on something fierce, like I would die without it or something, but there just wasn’t any to be had. So what to do? What to do?

I had no choice but to go up to those people who were saying I didn’t have any and ask them if they had some to spare. They looked at me as if I had asked them if they had psoriasis and could I borrow some.

“What?” they asked. “What are you talking about? We don’t have any of that.”