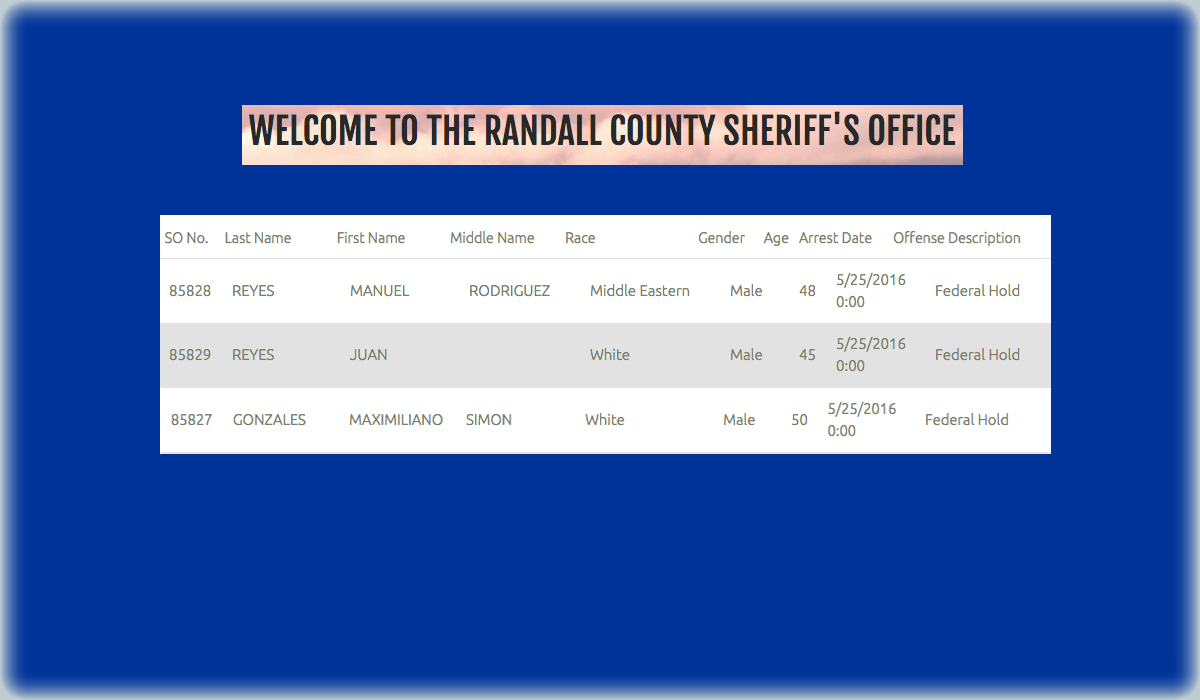 Above: Screen shots from the Randall County Jail roster show Manuel Reyes, Juan Reyes and Maximiliano Gonzales are in custody following their arrests Wednesday in Dumas and Cactus.

A multi-agency investigation lead to the arrests of three men in Dumas and Cactus on Wednesday, but none of the agencies, including the U.S. District Court Northern Division, where the men appeared Wednesday, are releasing information. However, the arrests of Juan Reyes, Manuel Reyes and Maximiliano Gonzales are confirmed on the Randall County Jail roster.

DPS Spokeswoman Trooper Cindy Barkley said Texas Rangers, DPS Criminal Investigative Division, FBI and the Moore County Sheriff’s Office were some of the agencies “that have been involved in an ongoing joint investigation in relation to the arrests this morning (Wednesday).”

“I have been advised to refer all inquiries to the FBI PIO located in Dallas,” Barkley said.

In response to the Journal’s email to the FBI asking for information, FBI Spokeswoman Allison Mahan said, “The FBI will decline to comment on your inquiry.”

The US. District Court Northern Division also is silent. No information about the men’s appearance in court or criminal complaints shows up on a search of the court’s website. A court clerk, who asked not to be identified during an in-person request from the Journal, said he has information that Manuel Reyes and Gonzales were in court, but he has no information on Juan Reyes.

Moving forward to the Randall County Jail’s online roster. The three men are in custody there with federal holds on them. No offenses are listed.

According to court documents, Adan Reyes is charged with nine counts, including laundering of monetary instruments and conspiracy to distribute and possess with intent to distribute 1,000 kilograms or more of marijuana. His indictment alleges he engaged in illegal drug operations and money laundering since 2006.

Guadalupe Reyes and Saucedo are scheduled to go to trial June 27, according to court documents.