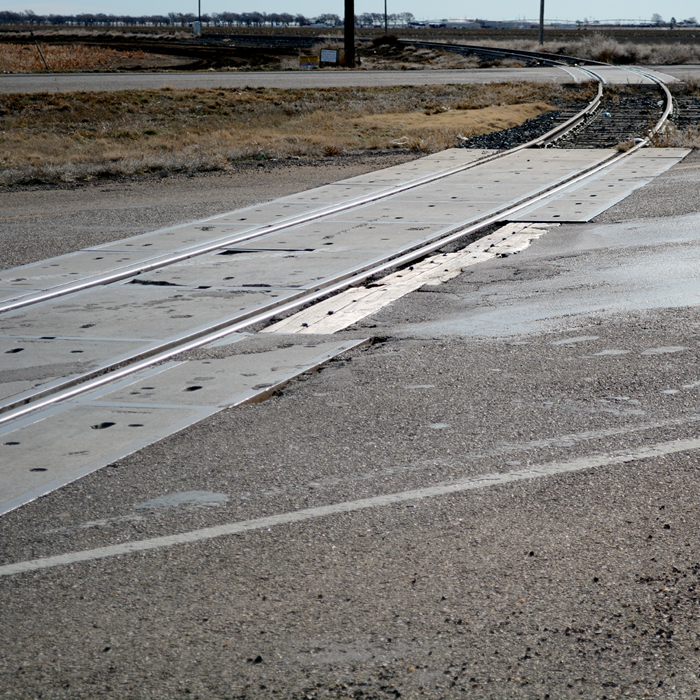 Above: The railroad crossing on Highway 287 north of Dumas has deteriorated to the point that it is dangerous, Justices of the Peace Barbara Mulanax and Sue Sims said. They contacted TxDOT and BNSF Railways, telling them they want it repaired.

If you driven Highway 287 from Dumas to Etter or back, then your vehicle has probably suffered a concussion when you drive over the railroad tracks that cross the highway. Drivers who know that stretch of road have taken to moving into the turning lane to avoid the deteriorating crossing, which hasn’t escaped a Department of Public of Safety trooper’s attention — or that of Moore County’s two justices of the peace.

“A trooper came in and told me he was going to start writing tickets because people are getting into the turning lane when they get to that railroad crossing,” said Justice of the Peace Barbara Mulanax. “He said he has already written about 18 warnings.”

Numerous people have complained about the dangers that crossing creates for drivers. The tracks have sunk, causing the highway to dip at the tracks, and Mulanax said it’s causing drivers to almost lose control of their vehicles

“I know someone who drives a Yukon, and she told me that when she drove over the tracks, the impact shut her vehicle down and almost caused the vehicle to roll over,” Mulanax said.

Justice of the Peace Sue Sims said she also has had “terrifying” experiences crossing the tracks, and she has had enough of it. She emailed Tim Huya, an official with BNSF Railway, on Dec. 9 and asked what are they going to do about the hazard.

“These tracks have become very dangerous to cross, driving at the speed set by the state for this area of the roadway,” Sims said in the email. “Many people swerve to the side in order to not hit the large drop in the roadway. … What is it going to take to fix the tracks short of an accident or a fatality?”

Mulanax also contacted Huya and TxDOT, and she and Sims tag-teamed the agencies, demanding something be done about the crossing. It worked. A few minutes after Sims sent the email, Huya responded and said he was on it.

“BNSF’s Track Maintenance team is in the process of assembling materials to replace the concrete crossing panels and coordinating with the TxDOT Amarillo District Office for those installations,” Huya said.

“I just received a call from … Barbara Mulanax … about the condition of the crossing surface,” Huya said. “Judge Mulanax indicated that motorists are reported swerving out of their travel lanes when crossing and requests that BNSF perform the necessary repairs. … Please provide your planned START [his emphasis] date for this project.

Corky Neukam, TxDOT’s Dumas Area Engineer, said he called Huya on Wednesday to ask about that date, but he had to leave a message.

“BNSF has set a date to begin the project, but I don’t know it yet,” Neukam said.

Mulanax and Sims said they’re not letting up on the agencies.

“That is a very dangerous situation out there,” Mulanax said. “We’re not going to stop until they get it fixed.”