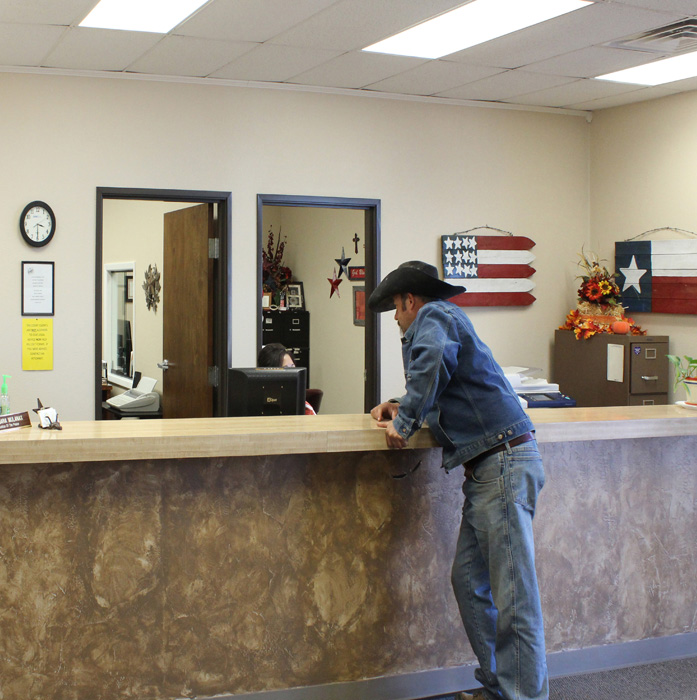 Above: Justice of the Peace Barbara Mulanax has told the Moore County Commissioners Court her clerks have no protection from angry people coming into the Precinct 1 office. Her two clerks’ offices are behind the counter. She and Justice of the Peace Sue Sims, Precinct 2, want security measures put in place.

Frustrations surfaced as the Moore County justices of the peace wrangled with the County Commissioners Court on how best to provide security for their offices. The discussion has been on going for months, but on Monday, Justices of the Peace Barbara Mulanax and Sue Sims said the commissioners’ proposals for security measures don’t align with their needs.

All of the courthouse offices are equipped with a panic button and COPsync, a communications system that immediately alerts a network of law enforcement officers of a problem, but Mulanax and Sims said their remote locations render those options almost useless. Moore County Judge Rowdy Rhoades said the courthouse offices are equipped with the same security Mulanax and Sims have, but Mulanax said the comparison isn’t valid.

“You can’t compare our offices to other offices,” Mulanax said. “You don’t know what goes on in our courts.”

Rhoades suggested the justices of the peace wear their panic buttons around the necks, but Sims said, “I don’t think I want that hanging around my neck.” The justices of the peace have told the commissioners they want to lock their front doors, which would require a person to push a button to gain access. The commissioners have opposed that idea, saying they are public offices, and the public shouldn’t be denied access to them. For some time, Mulanax and Sims have suggested installing bulletproof glass on top of the counters, but the commissioners have maintained the panic buttons and COPsync provide sufficient security measures.

The justices of the peace disagree, and on Monday, Mulanax said the decision isn’t completely in the commissioners’ hands.

“We’re elected officials, too,” Mulanax said. “We have a say of what is put in our offices. You control the budget, but all I’m asking is give us a chance to look at other options. I see no point in updating a system that goes no place.”

A special security fund is in place to provide equipment for the justices of the peace offices. A percentage of the money collected from fines goes into the fund, but the Code of Criminal Procedure is specific on what the money can be used for, The Code allows for “security personnel, services and items”, which includes the purchase of electronic locking and surveillance equipment. However, Rhoades said those purchases still have to approved by the Commissioners Court.

As the discussion continued with no resolution, Commissioners Daniel Garcia and Lynn Cartrite stopped it.

“This has been going on since this summer,” Garcia said. “If we put in the Plexiglas, will this quiet it down?”

Cartrite asked Mulanax and Sims what would fix the problem.

“What kind of security do you want other than to lock the front door?”

Cartrite told the justices of the peace if they wanted the doors locked, then they’d lock the doors. However, that measure would require a majority vote from the Commissioners Court and cannot be approved by one commissioner.

Mulanax and Sims said they’d look into the costs of the installing the glass and bring it back to the commissioners. In addition, cameras are being installed in both offices, and their panic buttons are being checked to ensure they’re operational.

“I think you really need the panic button,” Rhoades said.