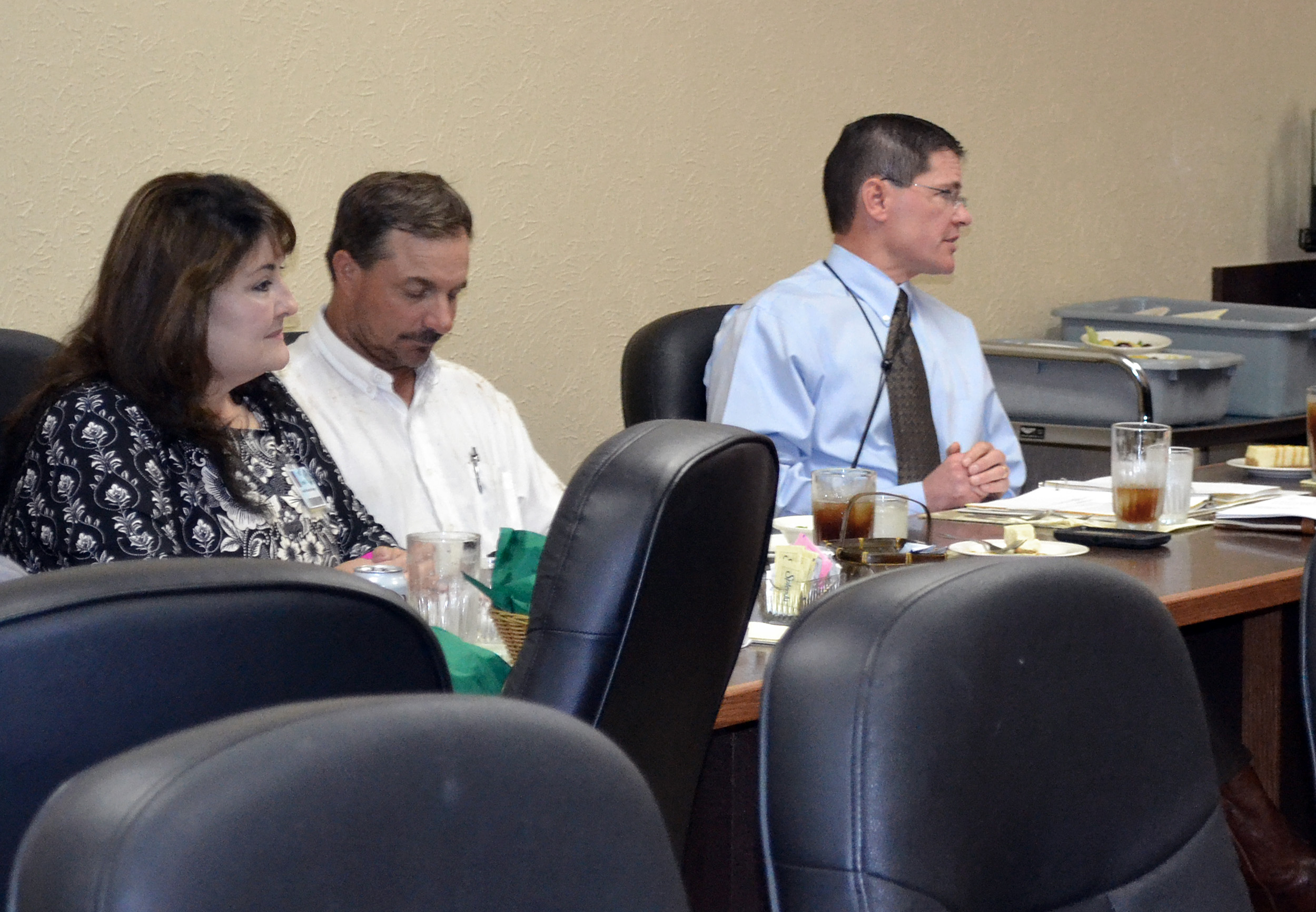 Above: MCHD CEO Jeff Turner, right, told the board of directors Wednesday the district entered into agreements with Amarillo Heart Group and Allergy Solutions Inc.

Medical services available to residents in the Moore County Hospital District continue to grow. MCHD CEO Jeff Turner told the Board of Directors on Wednesday the district will open an allergy clinic inside the Moore County Family Health Clinic, and Amarillo Heart Group also will open a Dumas clinic.

The district signed an agreement with Colorado-based Allergy Solutions Inc., and the services should be available within a few months. Turner said the services are “very provider friendly”, with the district buying the test kits from the company, which will provide the serum should a patient test positive. Other physicians in Dumas offer allergy services, Turner pointed out, but they focus on patients inside their clinics.

On Oct. 6, AHG will open its Dumas cardiology clinic in Dr. Bonnie Carter’s former office on East 1st Street, and they expect to see patients at least twice a month, Turner said.

“We anticipate they’ll be ordering stress tests from the hospital, and I see this as an opportunity to keep people in Moore County and folks who live north of us to come to Dumas as opposed to going to Amarillo,” Turner said. “It’s good economic development for the entire community.”

As the district grows, the 2015 Physician Satisfaction Survey scores also are on the upswing. Turner said 14 responses, seven from physicians employed by the district and seven in private practices, are “as good as we’ve ever done.”

The in-house survey has asked the same questions for the past five years so they can be benchmarked against each other, and they’re rated on a five-point scale. The overall scores show physicians are more satisfied in areas such as “likelihood of your recommending this hospital to your patients”, likelihood of your recommending this hospital to other physicians” and “overall rating of care delivered at this hospital.” The total average of those questions is 4.68, up from 4.51 in 2014. [The survey results can be seen at the bottom of this report.]

Turned noted that when the physicians answered questions about the nursing staff, some of the scores fell a few hundredths of a point, but he said hiring nurses is extremely difficult when the district has to compete with the large sign-on bonuses some of the Amarillo hospitals offer. Also, the district often hires recently graduated nurses who are continuing their training at Memorial Hospital. The survey scores reflect the nursing turnover rate, but Turner said many of the nurses who leave the district to work in Amarillo often return to Dumas when they realize the working environment in Amarillo isn’t what they thought it would be.

The growth of the district is reflected in the renovation of the Memorial Nursing and Rehabilitation Center. Phase I is nearing completition, Turner said, and they’re waiting on lighting fixtures that will be in Sept. 28. The center’s wings are being closed one at a time for the renovation, and the project includes work on the back patio and the dining area. Turner said the work is about a month behind schedule, but the contractor assures him the renovation will be completed on schedule.

Below are the 2015 Physician Satisfaction Survey results.