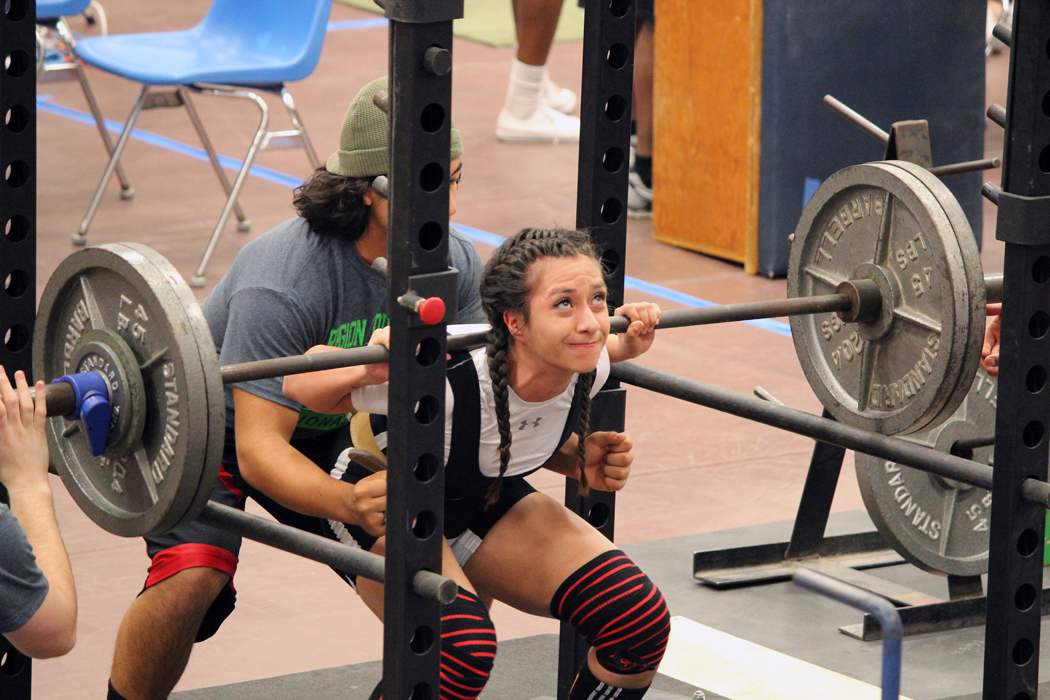 Above: Monica Hernandez (114), competing in squats, broke the regional deadlift record of 250 pounds with a 275-pound lift at Fort Stockton on Saturday. Five Dumas girls qualified for the powerlifting meet in Corpus Christi on March 19. (Photo by Liz Moreno)

Monica Hernandez didn’t just beat a regional deadlift record at Fort Stockton on Saturday, she left it in the dirt. Hernandez’s (114) 275-pound lift soared over the previous 255-pound record, and her teammate, Gabby Moreno (165), tied the regional total record of 755 pounds for all three lifts.

“It was a thrilling experience,” Moreno said. “It makes it so much more exciting having to actually push myself to make myself better, and that’s what I’ll be doing for the next two weeks.”

The team claimed three first-place medals, a second place, a third place, two fourth-place finishes and a fifth place. The eight medals pushed the girls to a second-place team finish with 34 points, six behind Plainview’s stockpile of 40. Along with Hernandez and Moreno, three other Dumas powerlifters, Kyla Clark (181), Emilee Courville (198) and Priscilla Zamarron (220-plus) qualified for the state meet in Corpus Christi on March 19.

“There’s going to be about 180 girls from the 5A schools lifting, so it’s going to be tough,” Coach Chuck Atchison said. “To make it down there is one thing, but to make it to the top 10 is really something. I’ll be ecstatic if we can do that. That would be a huge success.”

Atchison said Hernandez “didn’t have a great day on squats,” but she made up for it on bench and deadlift, and it might be why Hernandez said she’s going into the state meet “humbled” but determined to represent Dumas well.

“Last powerlifting season, it would have been nothing but a dream to do half the things I have accomplished this season,” Hernandez said. “All the time, effort and sweat has definitely paid off.”

The regional results are: