Home LIFE + STYLE Hearts full of kindness and acceptance mean two boys will have a... 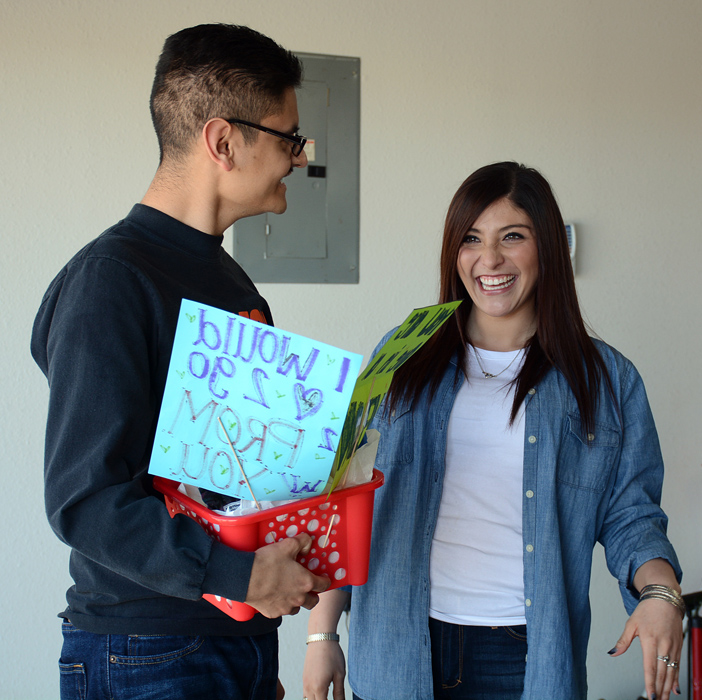 Above: Gabby Moreno surprised Richie Ramirez on Wednesday by asking him to the prom. Her best friend, Chani McKanna, asked Raul Padilla. The boys are in DHS’ Alternative Curriculum Class.

It was a moment worthy of a movie. Acts of kindness and acceptance crowned a couple of friendships strengthened over the years when two Dumas High School girls surprised two boys by asking them to go to the prom.

Richie Ramirez and Raul Padilla attend DHS’ Alternative Curriculum Class, and Gabby Moreno and Chani McKanna have been friends with them for several years. Since she was a sophomore, Gabby has wanted to ask Richie to go with her to the prom or another event.

“I got close to Richie, and I wanted to do something that would make him feel special,” Gabby said. “I wanted him to know that he’s part of the school’s important events, too.”

Chani was on board as soon as Gabbie told her the plan, and she decided to ask Raul. Their mothers immediately approved.

“Misti told me Friday, and it made me cry,” Chani’s mother, Misti McKanna Garcia, said.” “We have a special love for these kids. I’m all for it.”

Richie’s mother also was moved by the girls wanting to ask the boys to the prom.

“I’m very grateful to Gabby and her mother and Chani and her mother,” Rosa Ramirez said. “Richie is a timid boy, and this is going to mean a lot to him.”

Chani is the volleyball team’s manager, and Gabby was voted DHS Homecoming Queen and Miss DHS. When Gabby told her father what she wanted to do, he had some apprehensions.

“When Gabby told us she wanted to go to the prom with this gentleman, I was worried about what others would think,” Gabe Moreno said. “Well, people can think what they want, but I know what’s in my daughter’s heart, and she would do it without the ‘Homecoming Queen’ status, the academic awards or anything else she has accomplished these last several years.”

So Gabby and Chani went forward with their plans. They decorated boxes that had the boys’ names on them, hunkered down in them and waited in the closed garage at Richie Ramirez’s house. There was joking about what they’d do if the boys said no.

The ACC bus Richie and Raul ride stopped across the street from Richie’s house, and the ACC students got out — except Richie and Raul. The other students were ushered into the house, and they became part of the surprise. When Richie and Raul walked up the driveway, the garage door opened, and they saw Gabby and Chani in the boxes. It took a moment for the boys to figure out the girls were asking them to the prom, but even when they did, they were still surprised into silence. Then Gabby broke the ice.

Richie said yes, and Raul said yes to Chani. When asked what she thinks prom night will be like, Gabby’s answer was simple and sincere.

Then the girls made another decision. Gabe said he would rent a limo for prom night, so after they asked the boys to the prom, they decided to take the other boys in ACC, too. When the Moore County Journal posted the pics on Facebook, the outpouring of support and congratulations poured in.

“Gabby had this plan since her sophomore year, and she had always told us that during her senior year, she would take her friend, Ricardo, to the prom,” Liz Moreno commented on Facebook. “But after seeing all the excitement from all of them (ACC students), she said she would just take all of them. So it looks like we will be needing a limo to get all of them in one vehicle. We will do what it takes to make it a special night for all of them.”

The prom will be held April 1, and as Gabby said, it will be “unforgettable.” Especially for several ACC students who have been showered by the kindness from two girls.

“She (Gabby) would do it again without the recognition, only to know she put a ray of sunshine into someone’s day,” Gabe said. “To know someone’s day has been uplifted, that’s what we teach our kids: Make someone’s day!”

And Gabby and Chani did. 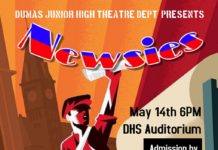