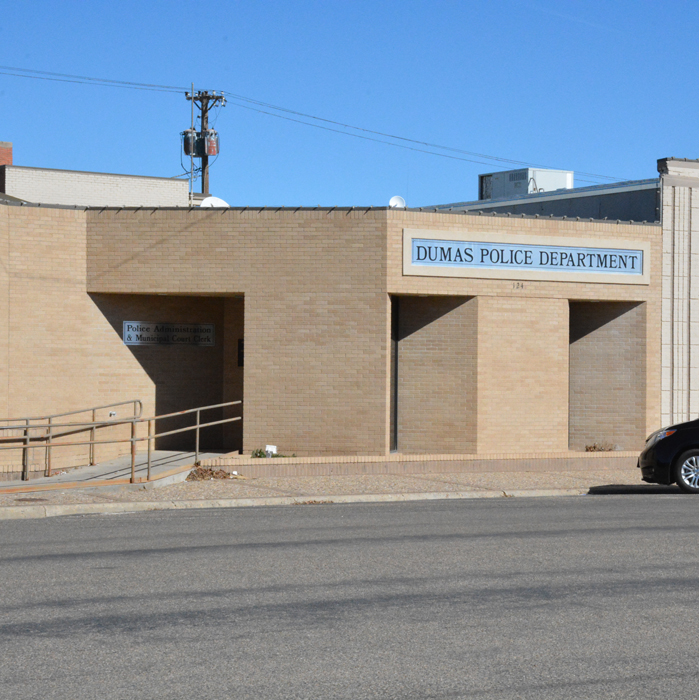 A man walked into the office Linda’s Cleaners on Thursday and stole a 9mm Ruger, according to Dumas police report. The victim told police Gary Byrd entered the cleaners while employees were in the back and took the gun that was lying on a desk. Police obtained a description of the vehicle Byrd was driving, and they found it in the 300 block of South Dumas Avenue.

The report said Byrd was intoxicated, and he was arrested. Police recovered the gun and two magazines. Byrd was charged with DWI 2nd, theft of a firearm, possession of a firearm by a felon and possession of marijuana less than 2 ounces.

1200 block S. Meredith — Responded in reference to a suspicious subject. Investigation disclosed nothing suspicious was going on, and the subject was trying to retrieve his bird from outside. Nothing further.

100 block W. 14th St. — Conducted traffic stop on a white Firebird with temporary tags for failure to signal and defective equipment. Contacted driver Johnny Villegas and passenger Rosa Urbina. Urbina was found to have an outstanding warrant, and she was transported and booked at Moore County Jail.

2003 S. Dumas Ave. — Dispatched to Walmart in reference to theft by an employee. Contact made with suspect, and some of the money was recovered. Charges filed.

500 block W. 14th St. — Officer observed a white Chevy Caviler with defective equipment (Broken Tail Light). Officer conducted a traffic stop for the violation. Officer spoke with driver identified as Erica Spain and passenger Keifer Robinson. Spain admitted to officer she had a marijuana pipe in her purse. Search was conducted, and officer located a brown container known as a pinch hitter. Also located under the seat was a black container with marijuana residue. Citation was issued for Possession of Drug Paraphernalia, and the contraband was booked into evidence.

300 block Denton — Dispatched in reference to a domestic disturbance. Upon arrival, officers investigated the scene, and it was learned that parties were arguing over personal matters. Parties were separated for the night.

400 block S. Dumas Ave. — Dispatched in reference to a welfare check. Upon arrival, officer made contact with male subject, who advised that he was homeless and was catching a bus in the morning.

1300 block S. Porter — Officer was patrolling area and observed a male subject walking in the alley of the 1300 block of S. Porter. Officer made contact with subject identified as Jeremy Bouchard. Bouchard was found to be extremely intoxicated and was arrested for public intoxication.

500 block Phillips Drive — Dispatched to the above location in reference to a prowler. Unable to locate.

300 block N. Porter — Dispatched in reference to a domestic disturbance. Made contact with both parties. Parties were separated. Nothing further.

100 block Amherst — Dispatched in reference to vandalism. Made contact with victim who stated that sometime between Feb. 19 and Feb. 23 someone threw a rock through a bedroom window of his house. Scene was processed. No leads or suspects at this time. Report will be made.

1600 block S. Dumas Ave. — Dispatched in reference to a gas drive-off, involving a semi hauling motor vehicles. The semi was located, and officers spoke with the driver. The driver returned to the business were he paid for the fuel.

600 block N. Maddox — Dispatched to the above location in reference to a car alarm going off. Contact made with owner. Everything ok.

600 block N. Meredith — Dispatched in reference to a found firearm. Arrived and made contact with the complainant, who advised that he had located a chrome and black pistol laying on the ground. Report made.

300 block W. 17th St. — A white 2002 Chevrolet Tahoe was parked facing north on the west side of a private drive and fire lane in the parking lot of 300 W. 17th St. A 2014 Bluebird school bus was traveling south and attempting to turn east in the same private drive. The bus made a wide left turn and struck the Tahoe with the right rear of the bus. No injury.

1200 block South Porter — Dispatched in reference to loud noise. Found semi to be running. Operator was asked to turn off the truck and advised it was illegal to park his truck in a residential area.

1100 block E. 2nd — Officer was dispatched to 1101 E. 2nd St. in reference to a possible downed power line. Officer arrived and located a line down, which was a telephone wire. Windstream was notified, and they were sending someone to fix the problem.

1400 block S. Dumas Ave. — A tan 2000 Ford Expedition was stationary in the inside lane of the 1400 block of South Dumas Ave. at a red light, facing north. A white 2005 Volvo Tractor towing a semi-trailer failed to control speed and struck the Ford from the rear. The driver of the Ford was transported due to pain in her neck and back. She was later treated and released.

1200 block S. Maddox — Dispatched in reference to violation of protective order. Subject, Hushin Wait, was located in the back bedroom and taken into custody.

300 block E. 1st. St. — Officer was dispatched to a vehicle accident at 300 E 1st. Officer arrived and located a maroon Chrysler and a Dodge Ram pickup in the Toot’n Totum parking lot. The Chrysler was traveling east and failed to yield right of way, striking the Dodge Ram going west on E 1st St. Accident report was completed.

300 block S. Dumas Ave. — Officers observed a White GMC truck fail to drive in a single lane in the 500 S Dumas Avenue. A traffic stop was initiated on the vehicle. Contact was made with driver Anthony Gates. Officers observed Gates to have bloodshot watery eyes and to have a strong odor of an alcoholic substance emitting from his breath and/or person. FSFTs were conducted. Anthony was booked into Moore County Jail for Driving While Intoxicated.

300 block Bruce — Minor accident. A 2005 Chevy pickup backed out of a private drive and struck a 2015 Toyota passenger car that was parked on the west side of the roadway. No injuries.

100 block E. 13th St. — Conducted a traffic stop on a white Honda Civic with temporary tags. Made contact with driver, Heriberto Padilla-Hernandez. Padilla-Hernandez did not have a valid driver’s license. Located in the floorboard was a crystal substance. Charges filed, report written.

1100 block S. Birge — Dispatched in reference to an accident. Investigation disclosed that a 2014 Honda failed to yield right of way and struck a 2010 Nissan. No injuries.