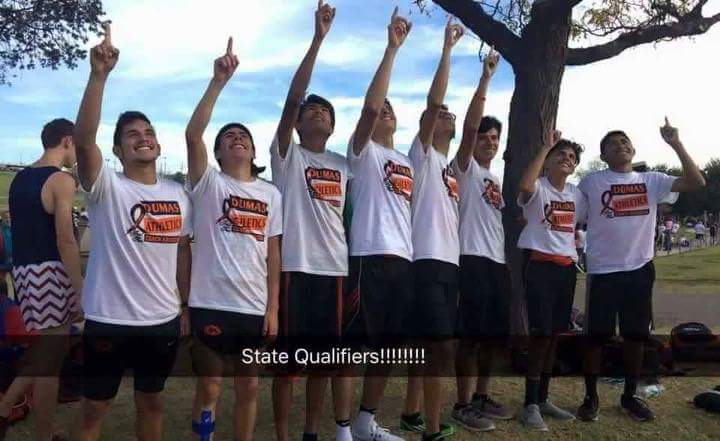 The Dumas cross country team had a guardian angel helping them continue their season Saturday at the Region 1 cross country meet. With the tragic loss of their beloved coach, Ryne Erickson, the Demons set out to honor Coach Erickson in the one way they knew how, get back to the state cross country meet for the first time in 10 years. After three restarts, and less than 18 minutes, the Demons accomplished their task finishing fourth out of the 24 team field, beating district champion Randall, and securing the final team spot for the trip to Round Rock on November 12.

At mile 2, I told them that their hearts were tired, but Coach Erickson’s heart was ready to be used. This is why our motto has been “Two Hearts.” At that point, every one of our guys started to pick runners off, two and three at a time. As the finishers were coming across the line, I was trying to count the teams that I thought would give us a run, but after the first pack of runners came through, all I could do was look for orange jerseys. When the race was finally over, I knew it was going to be close, but I honestly thought that we might have gotten edged out by Randall once again.  When I got the results and noticed that by Josh’s name there was a “Team” initial (stating that his points counted for a state qualifying team), I lost it. It was such an amazing feeling to know that we accomplished what we have worked for since June, and what we promised Coach Erickson in September. I could not be more proud of a group of young men than I am of these guys.

Dumas’ Improbable Season for Erickson Comes to a Successful End at...