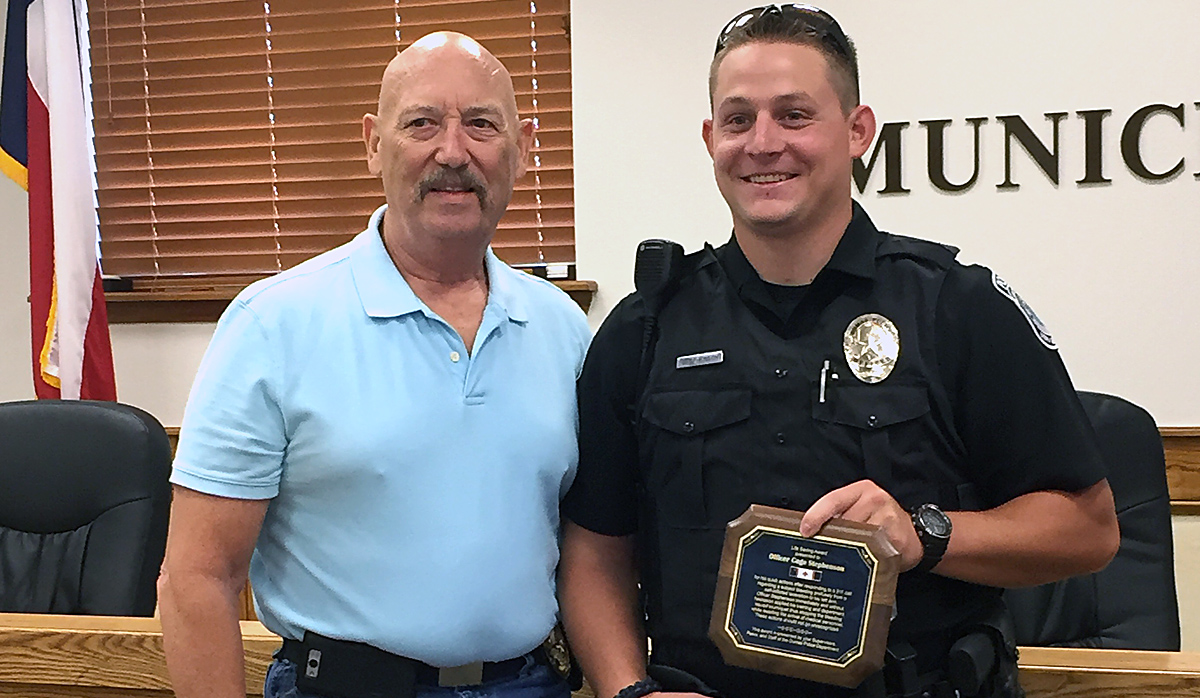 Even though 12 Texas law enforcement officers were killed in the line of duty in 2015, more than any other state, they’ve repeatedly shown all lives matter to them, and for the second time in a month, the Dumas Police Department recognized one of its officers for saving a life.

Chief Jim Nelson presented Officer Stephenson the Life Saving Award on June 22 for using his training to stabilize an unidentified person’s bleeding until medical personnel arrived. According to the award, Stephenson answered a 911 call recently and found the person “bleeding profusely from a self-inflicted laceration to his left arm.” Stephenson used a department-issued tourniquet to stop the bleeding.

Stephenson, who recently went to work with DPD, answered the call with Officer Hamilton. Together they attended the person. Hamilton received the Life Saving Award on June 14. The distinction is given to officers who perform an exemplary act that directly contributes to saving another human life.

Stephenson and Hamilton are just two police officers who have saved lives across the nation, even though many times their own are at risk. In 2015, the Huffington Post reported that an Austin Police Department officer pulled over a woman during a routine traffic stop, and while approaching her car, he saw something was amiss. She was clutching her throat, and the officer saw she was choking on a biscuit and couldn’t breathe. The officer immediately pulled her out of her seat and performed the Heimlich maneuver until the biscuit was dislodged.

Also in 2015, a police officer in Maryland is credited with saving an infant’s life, reported by WBAL-TV. Officer Herman in Montgomery County was conducting a traffic stop when a man and woman came up to him with the baby, who was unresponsive. Herman performed CPR on her until she regained consciousness, and as he waited for emergency medical personnel to arrive, an out-of-state firefighter stopped on the side of the road to offer assistance.

Nelson said any of his officers would do the same, as Hamilton and Stephenson demonstrated.

“I’m very proud of our officers … too many times members of this generation are wrongly accused of not caring. Officers Hamilton and Stephenson disproved that belief. Our officers’ quick and concise actions, which probably saved someone’s life, should not go unnoticed. The citizens they serve should be very proud as well.”