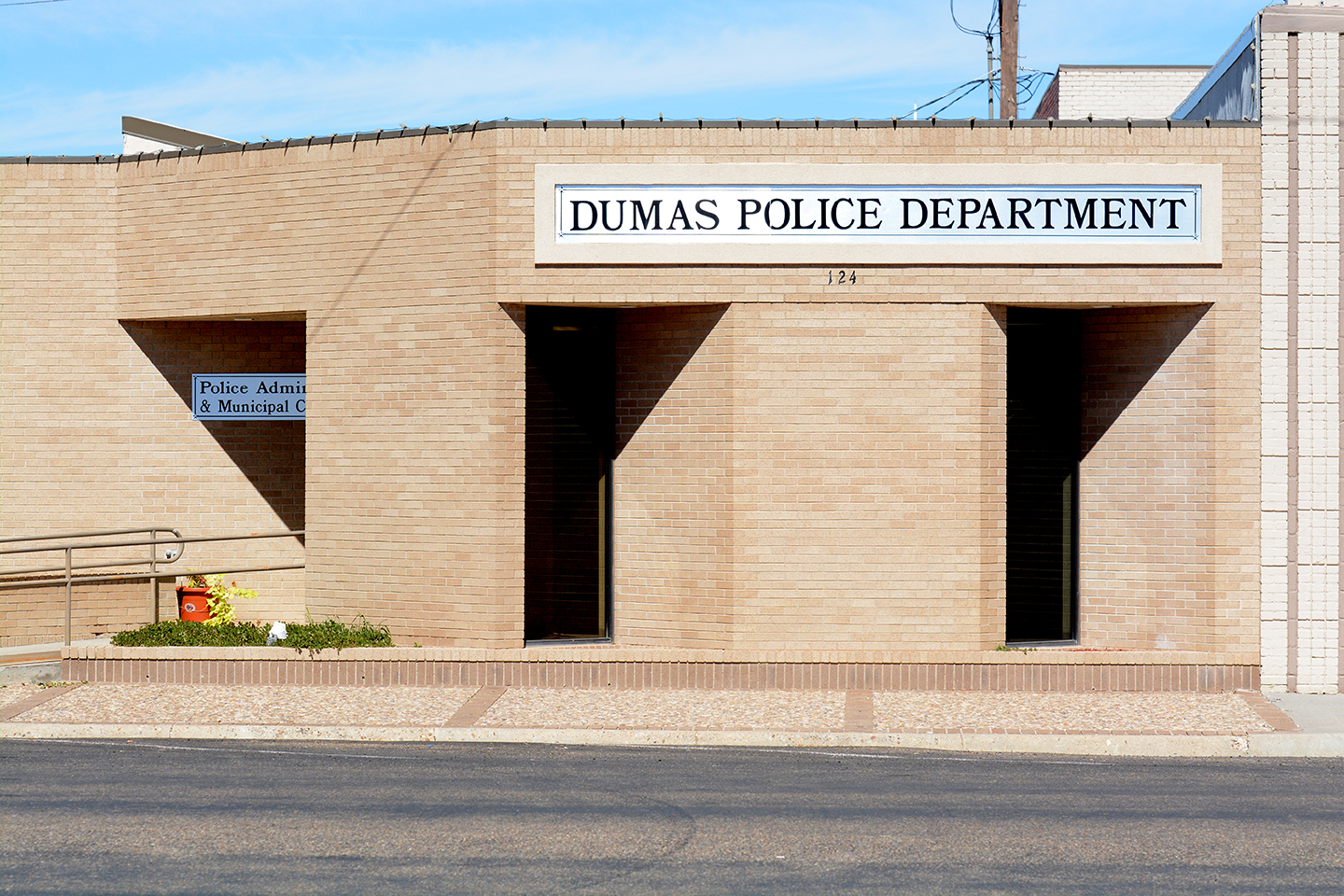 On the day a string of car burglaries were reported to Dumas police, officers arrested a man allegedly involved in the theft. Dumas police reported six vehicles were burglarized in the late hours of Sept. 27 and into the early hours of Sept. 28 between Mills Avenue and Northridge Street. They arrested 22-year-old Angel Vasquez on Sept. 28 and charged him with credit card abuse and fraudulent use of identifying information. Vasquez allegedly used a credit card stolen during the burglaries at Walmart, which was caught on video.

“We made the arrest on the day we received the reports,” Dumas Police Sgt. Clark said. “There were multiple reports submitted by multiple officers, but everyone worked together to act quickly.”

Dumas Police Sgt. Jordan said they’ve recovered about $1,500 worth of property, and the burglaries are still under investigation.

2. 400 block E. 8th – Accident – Dispatched in reference to suspicious behavior. Upon arrival, investigation revealed that it was a mva involving a pedestrian. Unit 1, a white 2001 Ford F150, was traveling east in the 400 block of E. 8th St. Unit 1 struck two juveniles who were on foot heading east, curbside. Both pedestrians sustained minor injuries and were transported to Memorial Hospital ER for assessment by ambulance. The female juvenile was treated and released, and the male juvenile was transported to Amarillo as a precautionary for further treatment. Driver of Unit 1 was issued a citation for Driving While License Invalid. CR-3 completed.

Warrant NO. 145252-1 was confirmed for Ahmed Mohamed who was arrested and booked in at the Moore County Jail.

1. 100 block Melinda Lane – Poss. DWI ­— Dispatched in reference to a possible intoxicated driver. Vehicle was not located, everything OK.

2. 1700 block Lewis – Burglary of a Motor Vehicle – Dispatched to the Moore County Sheriff’s Office in reference to a burglary of a vehicle report. Spoke with the complainant who stated during the night time hours, unknown person(s) had entered his 2013 Ford pickup and stole eight credit cards and his wallet.

1. 800 block Phillips – Burglary of a Motor Vehicle – Contact was made with the complainant who advised unknown person(s) entered her unlocked white Kia Optima. The subjects took a baby iPad, wallet, $30 cash and vehicle keys.

2. 1300 block Mills – Burglary of a Motor Vehicle – Spoke with the complainant by phone who advised his iPad was stolen from his vehicle during the night time hours.

3. 1600 block Northridge – Burglary of a Motor Vehicle – Complainant advised subjects had entered their vehicle and taken her wallet during the night.

4. 1100 block S. Meredith – Prowler – Officer was dispatched in reference to a possible prowler. Officer searched the block. Officer was unable to locate.

5. 800 block N.E. 3rd – Driving While License Invalid – Conducted a traffic stop in the 800 block of NE 3rd for defective equipment on a white Toyota Camry. Officer made contact with the driver, Heriberto Hernandez, who found to be operating the vehicle with a suspended license. Dispatch confirmed his license was suspended, and he had previous convictions for DWLI. Heriberto was arrested for DWLI with prior convictions and booked into MCDC.

1. 1400 block S. Dumas – Assault – Officers made contact with the complainant who advised during an argument he was pushed. Complaint forwarded to Municipal Court.

3. 100 block Bellaire – City Ordinance Violation – Dispatched in reference to a male subject selling a product without a permit. Contact made with the male subject who was found not to have a permit and was instructed to stop selling until a permit was obtained.

4. 1300 block Mills – Burglary of a Motor Vehicle – Complainant advised subjects entered her vehicle and removed personal items. Complainant was advised some of her items had been recovered.

5. 1500 block S. Dumas Ave. – Accident Vehicle vs Pedestrian – A tan 2003 Mercury Marquis four-door was south in the 1500 block of South Dumas and entered the turning lane with the intent of

turning east into the 100 block of East 16th street. After entering the turning lane, the female driver of the Mercury stated she witnessed two males walk in front of her vehicle. She stated the males were walking from the west side of the street towards the east side. The males failed to yield right of way to the vehicle. One male went over the hood and into the driver’s

8. 600 block N. Maddox – Disturbance – Officers were dispatched in reference to a disturbance, male subject kicking the front door. Officer arrived on scene and found that suspect/victims fled out the back door into the alley. Officers were unable to locate.

9. 1200 block S. Dumas Ave. – DWI – Traffic stop conducted on a green Toyota passenger car for driving without headlights when required. Contact was made with driver, Ryan Merchberger, who was found to be intoxicated. Merchberger was transported to the Moore County Sheriff’s office, where was booked in for the offense of DWI.

10. 1600 block Binkley – Loud Music – Received a report of loud music. Contact made and the music was turned down.

11. 200 block Denton – Check Suspicious – Received a report of a suspicious vehicle in the alley of the above location. Contact made with the occupants who advised they were trying to find a place to sleep. They were directed to Texhoma park.

1. 200 block Cherry – Loud Music – Dispatched to the above location in reference to loud music.

2. 1700 block Sunset – Loud Music – Dispatched to the above location in reference to loud music. The music was turned down.

3. 800 block E. 5th – Accident Vehicle vs Pedestrian – Flagged down in reference to a pedestrian being struck by a passing vehicle. The complainant advised she had been standing by her vehicle on the north side of 5th St. when a passing 2003 GMC Yukon, travelling east, failed to see her due to the sun and struck her left arm with the driver’s side mirror. There were no injuries reported by the pedestrian, and she refused to be seen by EMS. There were also no signs of visible damage to the vehicle.

4. 400 block Bradley – Theft – Dispatched in reference theft. Made contact with the complainant who advised unknown person(s) had stolen two heavy duty diamond alloy side mount tool boxes from the north side of her garage at some time over the last two weeks.

6. 2003 block S. Dumas Ave. – Accident/Hit & Run – Dispatched in reference to a hit and run that occurred at Walmart. Arrived and spoke with the complainant who advised that at some point between 11:30 a.m. and 4:30 p.m. an unknown person hit her vehicle while she was at work.

7. 1400 block S. Dumas Ave. – Theft – Dispatched in reference to delayed theft. Contact made with manager, Ramiro Aceves, who stated two unknown white males entered the restaurant at 9:38 p.m. and left at 10:07 p.m. without paying for their meal. Total loss $44.73. Subjects left in a gray Ford pickup.

1. S. Dumas Ave. – Reckless Driving – Dispatched in reference to a reckless driver in a semi-trailer. Located the vehicle and was advised by a complainant that the vehicle had been swerving in and out of lanes. Contact was made with the driver, who advised that he was unsure of where to turn and had moved out of the turning lane without signaling.

2. 200 block Phillips Dr. – Check Suspicious – Dispatched in reference to several subjects walking carrying baseball bats, pipe wrenches and pipes. Arrived and made contact with several males who advised that they had purchased the items at a garage sale and were walking to their apartment.

3. 1600 block S. Meredith – Loud Music – Dispatched to the above location in reference to loud music. Music was turned down.

4. 1400 block S. Maddox – Parking Violation – Observed a vehicle parked curbside on the 1400 block of S. Maddox. Made contact with registered owner and advised her of the CVO. Vehicle moved without further incident.

1. 300 block Bruce – Disturbance – Dispatched in reference to a silver van occupied, shooting birds with a BB gun by the passenger. Area was canvassed but unable to locate any vehicle matching the given description.

5. 1100 block S. Meredith – Disturbance – Officers dispatched on a disturbance, male and female subjects arguing were separated for the night.