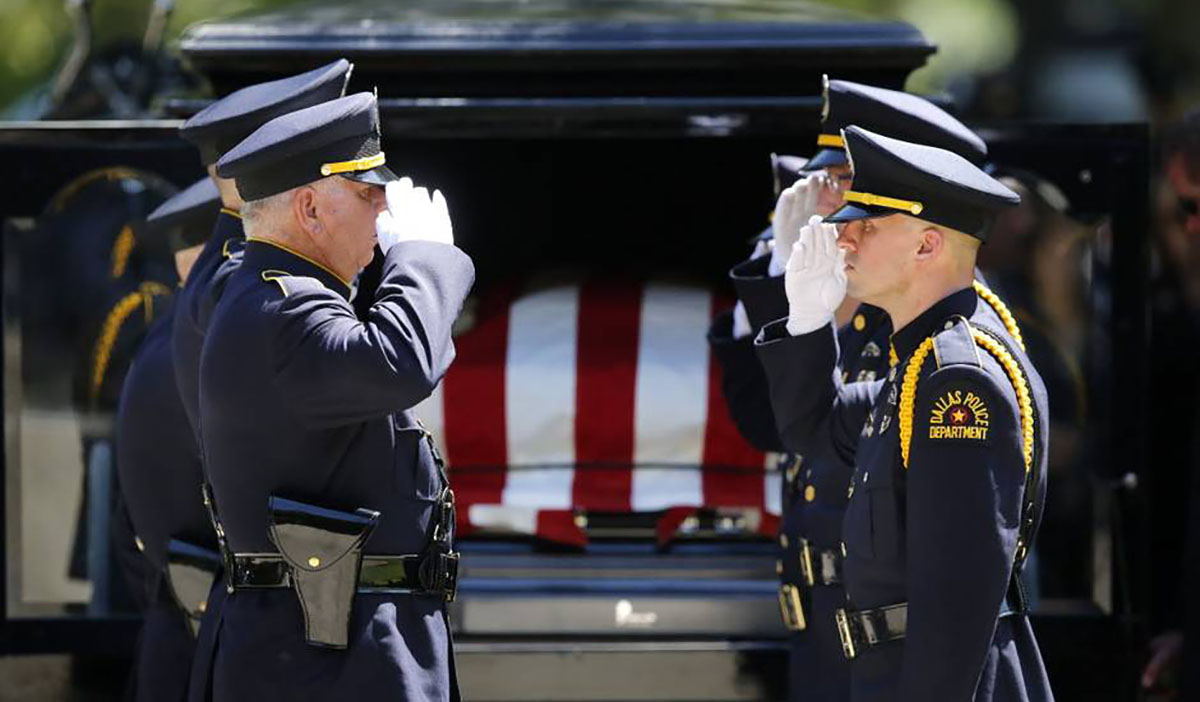 Above: Dallas Police Honor Guard members salute before removing the flag-draped casket of slain Dallas Police Sgt. Michael Smith from the horse-drawn caisson. Smith was laid to rest at the Restland Funeral Home and Cemetery in Dallas on Thursday. Smith was gunned down in an ambush attack in downtown Dallas a week ago. Four Dallas police officers and one DART officer were killed. (Tom Fox/The Dallas Morning News)

Editor’s Note: Dumas Police Officer Garland attended the funeral service for Sgt. Michael Smith, one of the five Dallas police officers killed during a protest. Instead of writing a story about Garland attending the funeral, I thought it would be more meaningful if Garland wrote it.

I went to Dallas for the funeral of Sgt. Michael Smith, who was one of the officers killed in the line of duty during the recent demonstration. It was a trip no officer wants to take, but honoring our own is part of our culture.

The funeral was held at Watermark Church in Dallas on Thursday, and the number of police, family and friends in attendance was breathtaking. There were officers from nearly every state, as well as officers from two other countries. Police motorcycles, marked and unmarked units lined the streets, and the enormity of it all shows how the law enforcement family pulls together and showers the families of fallen officers with support. Security was in place to deal with any possible protests during the service with FBI, DPS and SWAT officers in place. Helicopters provided more protection in the sky.

During the service, videos and pictures of Michael and his family on vacation, Christmas and family events were projected onto large screens. Tears flowed, and I can’t imagine what his two daughters and wife are going through. The funeral could last only so long, still many people spoke about Michael’s loyalty to his family and profession. The miles-long funeral procession was enormous.

For a law enforcement officer, there is nothing worse than to attend the funeral of a fallen comrade. Even if you don’t know them — “you know them.” All of us have families and people who love us, and to be taken from them in this way is tragic. We should all remember that hate can only be cured by love, and darkness can be pushed out only by light.

God bless every single law enforcement officer who bleeds, feels, shares emotions and kisses their loved ones goodbye before they leave for their shifts. Pay attention to detail, and don’t make it your last.