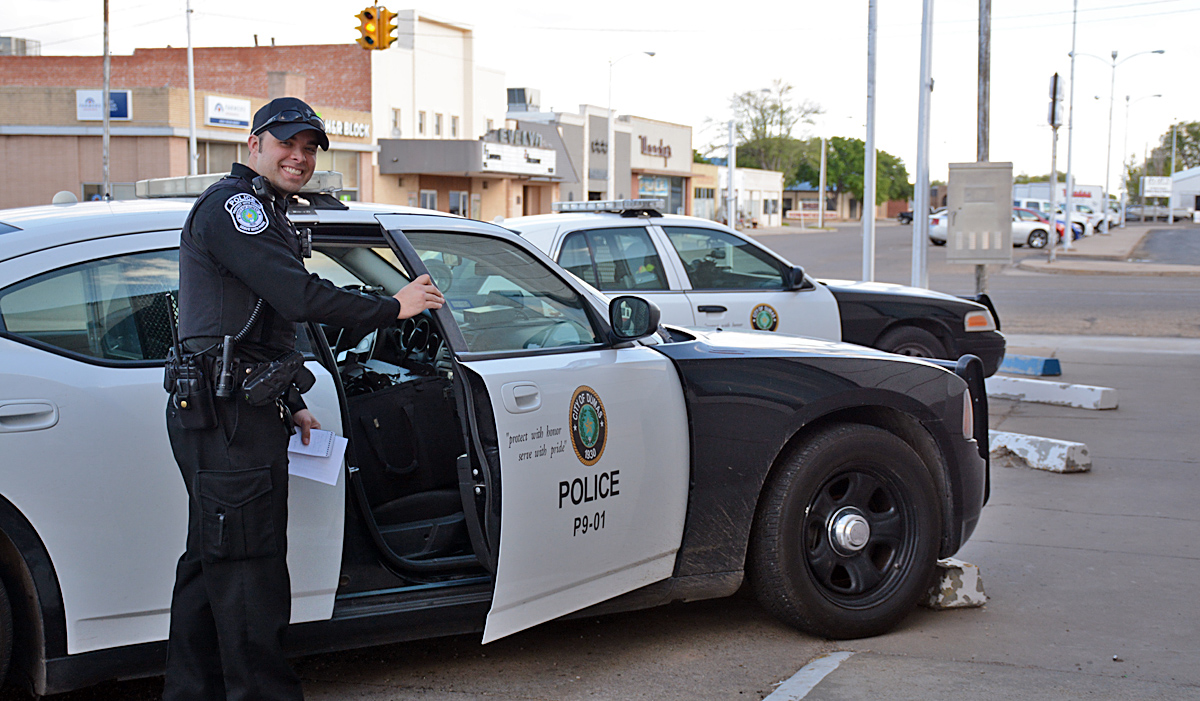 Above: Dumas Police Officer Luetkahans gets ready to begin his shift, loading his gear into the one of the six patrol units recently painted and given new decals. When the city of Dumas’ budget didn’t allow for the purchase of new patrol cars, Chief Jim Nelson used a much less expensive approach to rehabilitate the department’s vehicles.

He won’t admit it, but Dumas Police Chief Jim Nelson’s officers will say that during the three years he has led the department, morale is up, training is a priority, and his management style — strict but fair — is drawing talented recruits.

The Dumas City Commission appointed Nelson interim chief in January 2013 and then moved him into the chief’s position April 1, 2013, just one month shy of his 27th anniversary with the DPD. To date, he has worked in law enforcement 38 years, and it’s that experience he taps into to build a department that has not only fused to work efficiently but has strengthened its relationships with other agencies. Networking with other agencies is somewhat uncharted territory for the DPD since previous chiefs didn’t encourage it, but it’s working for Nelson.

“We have reinstituted the relations among the other law enforcement agencies, and this has benefited the citizens because it utilizes all law enforcement personnel in the event of a disaster or any other need for additional personnel,” Nelson said. “We now actually have officers eating lunch and conversing with members of other agencies, and the citizens are really liking this concept.”

The proof of citizens taking notice is reflected in the drastic drop in their complaints against the PD. The Journal reported that a year into Nelson’s administration in 2014, citizen complaints dropped 84 percent from the year before he took over. Nelson credits that drop to his officers engaging with the community and making strong efforts to understand the citizens’ needs and communicating with them outside of traffic stops.

“Officers are constantly receiving requests to speak to students as well as other community organizations that also extend outside of Dumas,” Nelson said.

One has to forgive Nelson’s dive into copspeak — he’s been at it too long. A person becomes a “subject.” When someone tells a police officer something, he “advised” the officer. As civilians we say we met with someone. Nelson and his officers say they “made contact with them.” Some people might think the conversation with a cop is stiff, but that rigid speak melts when the officers take part in community events.

In 2013, the DPD took part in the opening ceremonies for Special Olympics, running alongside the competitors with the torch and presenting the colors. Also in 2013, a team of four officers jumped into the March of Dimes Chili Cook-Off in Perryton and took first place. Nelson calls it the Community Policing Philosophy, which has the officers more involved in community events.

“This is not to say we have neglected our sworn duties to enforce laws,” Nelson said, “but the good citizens are treated with the respect they deserve, and even the bad ones with as much dignity as they will allow.”

The word that is a constant in talks with Nelson is “dignity”, and it’s one of the reasons turnovers in the department have dropped and why quality recruits are signing on with Dumas PD. Nelson recently hired three officers who were offered positions with other departments but chose to join Nelson’s staff.

“There were several things that convinced me to come to Dumas,” Officer Tickner, one of the new hires, said. “This department has a reputation for professionalism and superior training. As a new officer, I knew I would be getting everything I need to be a good officer.”

Tickner and Officer Heathington recently graduated from the Panhandle Regional Law Enforcement Academy, but the third hire, Officer Stephenson, had worked for the Amarillo Police Department. He left that agency and wasn’t planning on working for another — until one of his friends on the Dumas PD force, Officer Hamilton, convinced him that Dumas is a good place to work.

“I was convinced that what Hamilton was telling me was true after I spent some time talking to the Dumas officers,” Stephenson said. “There really is a strong presence of professionalism here.”

But for all the “good cop” policies Nelson has implemented, he has a word of advice for people who might misconstrue his department’s policies.

Translated from copspeak to civilian language, Nelson is saying he and his officers with help you in any way they can, but don’t think they won’t slap the cuffs on you if you break the law. Anyone who knows Nelson, Cpl. Williams, Sgt. Clark and others working for the department will tell you they won’t hesitate to stop their friends and family members if they see them doing something wrong.

“The law is the law,” Nelson said.

Perhaps it’s the 38 years Nelson has worked in law enforcement, tempered by a strong sense of fairness, that gives him that ability to uphold the law while treating people with dignity. He grew up in Dumas, and he has sometimes had to arrest childhood friends.

“They went one way, and I went another,” Nelson said. “But I don’t judge. I understand hard times because I’ve been there. I understand making sacrifices because I’ve had to make them, but you always have to do what is right, and that can often be difficult. I tell my officers that it doesn’t matter who the person is who is getting cuffed or what they’ve done, they deserve to be treated with as much respect as possible. We have to follow procedure, and that doesn’t always make us popular, but we have to keep the community safe as well as ourselves. I worry about everyone’s safety. I don’t want to be the one who has to knock on someone’s door to give them bad news, and I certainly don’t want to be the one who has to give an officer’s family bad news.”

Nelson makes himself available to his officers and the community but again, his strong sense of following procedure can irk people who want to bypass it. Any complaint against an officer has to be documented and reviewed. The officers wear body cameras, and the video often can often disprove the complaint. Still, Nelson never forgets that a huge part of his, and the officers’ jobs, is to help.

“The most satisfying part is working with the public, helping out where we can and supervising an outstanding bunch of guys and ladies who make my job much easier,” Nelson said.

In addition to the achievements mentioned above during Nelson’s administration, the DPD also has: