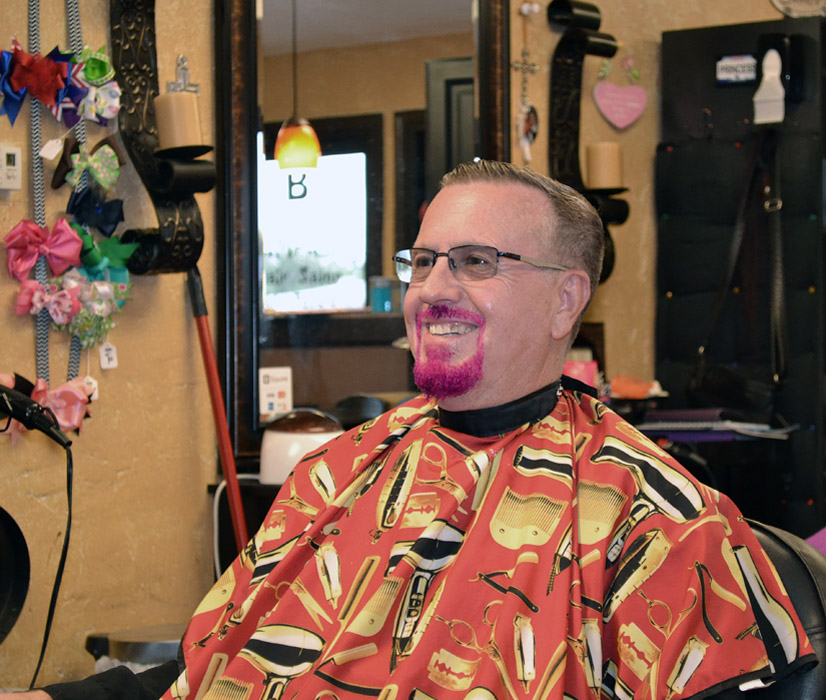 Above: Sweetie Green gets his goatee dyed pink to show support for Breast Cancer Awareness Month. His friend, Lyle Smith, had his beard dyed pink Thursday.

Real men do wear pink. In a show of support for Breast Cancer Awareness Month, two Dumas men dyed their beards and goatees pink, and they’re challenging other men with facial hair to do the same.

Lyle Smith has a full, bushy beard. On Wednesday it was pretty much gray, but when he walked into work at A&I Parts on Thursday, it was pink. On Friday, Sweetie Green had his goatee dyed an eye-catching pink at Rampage Hair Salon, and stylist Pam Diaz donated her services.

“I saw it on Facebook,” Smith said. “A guy did it, and a friend of mine shared his post. I thought it was something I could do to show support for women who are fighting breast cancer.”

Smith’s mother was a breast cancer survivor, and he thinks men should do something to encourage women in their battle against the disease. According to cancer.org, about 231,840 new cases of invasive breast cancer will be diagnosed in women in 2015.

Facebook might be the catalyst that gets men behind the going pink campaign. When Green saw Smith’s post, he decided to do it, too. But the difference between him and Smith is that Green’s wife has no idea of his plans.

“I didn’t say a word to her,” Green said. “She’s in Amarillo babysitting our grandchild, and she’ll find out when the pic and story are posted online.”

Green and Smith are hoping other men will get behind the support and awareness of breast cancer. They say they started late this year, but they’ll do it at the beginning of October next year. They’ll also add an Ice Bucket Challenge theme to it.

“We want to challenge other men, and if they don’t do it, then they’ll have to donate money to organizations that support women in their fight against breast cancer,” Green said.

Even though the two men started their challenge in the middle of October, they say there’s still plenty of time for others to go pink.

“I’m on my way to the courthouse to challenge Judge Rowdy Rhoades,” Green said.