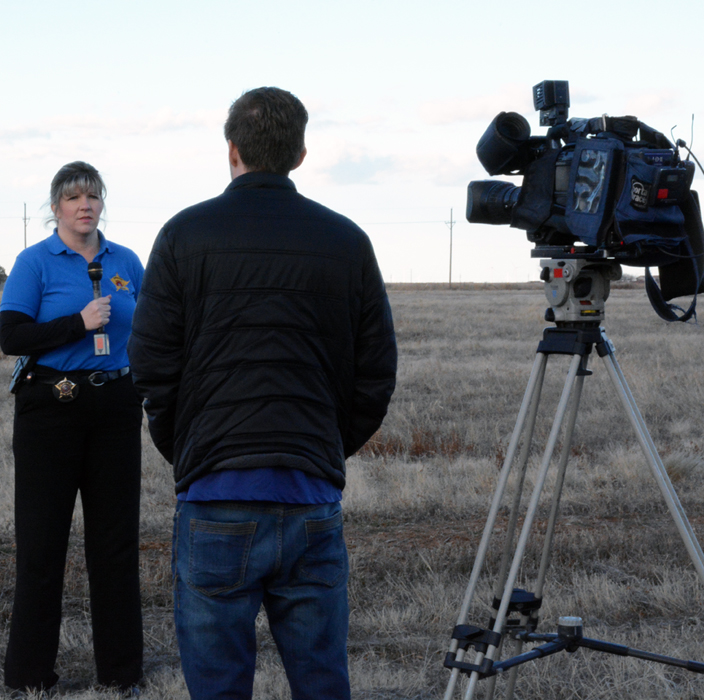 Above: A KAMR-TV reporter interviews Moore County Sheriff’s Chief Deputy Carmen Napp on Monday about the arrest of a man who confessed to killing his common law wife.

This story has been updated to say Volk’s bond has been set at $1 million.

The search for a woman reported as missing since August is almost over after 40-year-old David Richard Volk of Dumas confessed to killing her, according to the Moore County Sheriff’s Department.

Deputies arrested Volk at 3:35 p.m. Monday at the sheriff’s department for the murder of 39-year-old Ginger Rodriguez, who lived with Volk in a common law marriage. Her body hasn’t been recovered, and the Texas Rangers and the Dumas Police Department are working with the sheriff’s department in the investigation to locate it. The search for Rodriguez’s body is concentrated on the Volk property northeast of Dumas.

The sheriff’s department released a notice earlier Monday that said they had closed off an area surrounding NE 8th Street from Maddox Avenue to Norma Avenue as they worked on the investigation.

Volk is being held in the Moore County Jail with no bond.

The Journal will update this story as information is released.