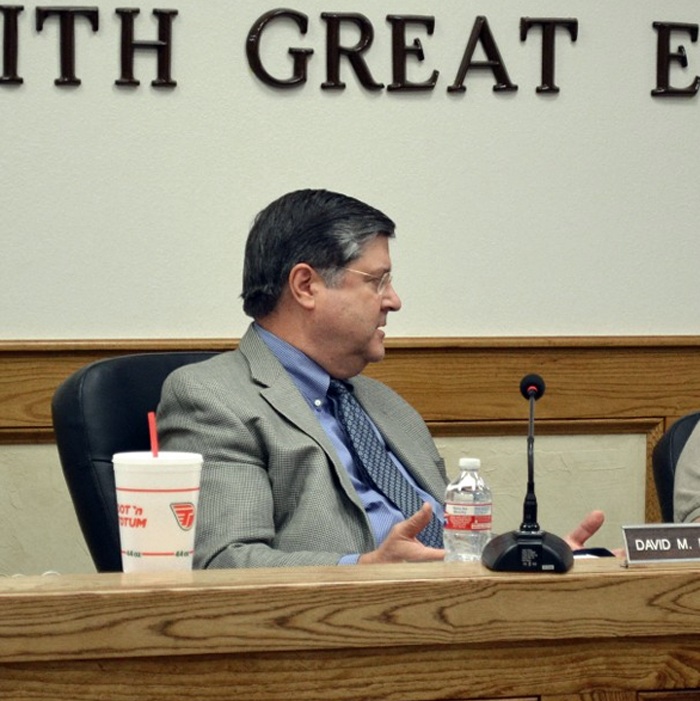 Above: Records obtained through a Freedom of Information request show Dumas Mayor Pro Tem Dr. David Bonner used two Gmail accounts to conduct city business. The city didn’t have access to those emails, preventing them from retaining the records as required by state law. (File Photo)

A request made under the Freedom of Information Act (FOIA) to the city of Dumas for the commissioners’ and the mayor’s emails revealed that two elected officials were using personal and work email accounts to conduct city business, acts that could expose the city to fines and sanctions.

The Moore County Journal on Nov. 13 submitted a request for the emails received and sent from the commissioners’ and the mayor’s city accounts from Oct. 1, 2015, to Nov. 13, 2015. The city promptly supplied those emails, but the records show Mayor Pro Tem Dr. David Bonner was using two personal Gmail accounts, and Mayor Pat Sims was using a work email account. The Journal filed two more FOIA requests, one on Nov. 16, 2015, for the emails on Bonner’s Gmail account, and another one on Nov. 16, 2015, for the emails on Sims’ work account. Sims immediately contacted the Journal upon notification of the FOIA request and made the emails on his work account available, and he instructed the city not to use that account again.

The records show Sims didn’t extensively use his work account for city business, but that wasn’t the case with Bonner. In an email dated Dec. 4, 2015, Bonner told City Manager Arbie Taylor and commissioners Ben Maples, Justin Willis, Steve Bodnar and Sims that the Gmail account was his “special account for city commission business.” Bonner sent that email from his Gmail account, commissionerbonner@gmail.com.

“I thought I would also point out that my special email account for city commission business is this gmail account, not my personal gmail account. The city address forwards to this so you should be able to send email to me at the city email address or directly to this gmail account,” Bonner said in the email.

The use of a personal email account isn’t illegal, but the law is clear regarding whether an official’s emails are public information. If they’re used “in connection with the transaction of official business,” they’re public, the Texas Attorney General said. Also, the state requires local governments to adhere to a schedule for retention and destruction of electronic records. “If the records are stored electronically, they must remain available and accessible until the retention period assigned by this schedule, along with any hardware or software required to access or read them. Electronic records may include electronic mail …,” the Local Government Code states.

The FOIA request for Bonner’s Gmail showed that account wasn’t available or accessible to the city. To comply with the FOIA request, the city had to ask Bonner for access to that email. Bonner’s admission that he had a “special email account for city commission business” puts those emails under the scope of the Act, and it puts the city in a precarious situation.

The Texas Record on Nov. 16 sent an email to City Secretary Kim Rehkoph, which she forwarded to Taylor, Sims and the commissioners. It alluded to Hillary Clinton’s use of her personal email account for her work at the State Department and included a link to a report titled “Using Personal Email for Government Business is a Bad Idea — Here’s Why.”

In the report, The Texas Record said, “ … By using a personal email account for government business, it means that your government’s official records are being stored on mail servers that are beyond your government’s and their IT department’s control. They don’t know where the data is being stored and they have no way to back up the data, archive it for retention, secure it from unauthorized access, or dispose of it once the retention period expired.” It further states, “While your government may claim that they did not know about the records, a court may find this as a failure to control government information and constitutes spoliation, which could result in colossal fines and sanctions.”

The records also show Bonner used another email to conduct city business, drdavidbonner@gmail.com. That account would contain more emails outside the city’s control, extending the possibility of fines and sanctions levied against the city. In the Texas Record report, it states, “ … the risks you take in doing so [of using a private email account] open you and your government up to some potentially costly and embarrassing consequences.”

Bonner and every elected official in Texas receive training in the general background of the legal requirements for open records and public information. They must complete a one- to two-hour course within 90 days of being sworn into office or assuming the duties as a public official.

Bonner did not respond to an email, requesting him to explain why he was using a Gmail account when the city supplied him with an official email account.

In the next part of this series, the Journal will report if the use of personal emails led to Open Meetings Act violations.