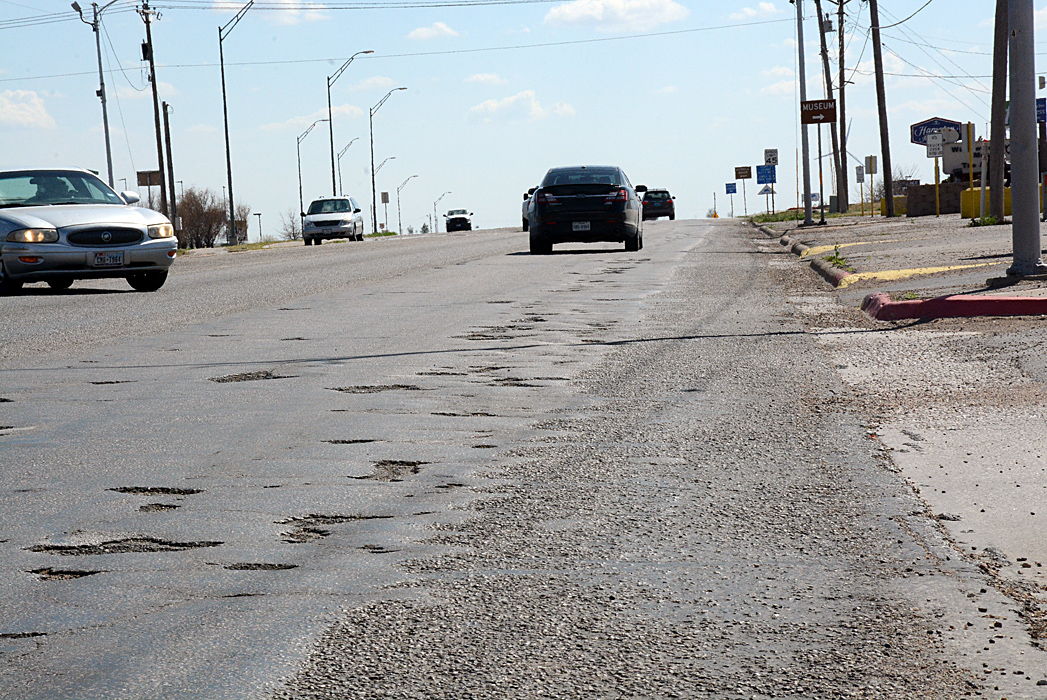 Above: Dumas Avenue suffers from potholes that grow in size and numbers. Mayor Pro Tem Dr. David Bonner will write a formal letter to TxDOT, asking them to repair their roads inside the city limits.

It’s what happens when a major highway’s traffic is funneled through a city’s downtown. Ceaseless semitrailer, car and truck traffic pound an asphalt road weakened by the assault of 30 inches of rain in 2015, creating the potholes that has people gnashing their teeth and a city commission ready to write a letter to TxDOT about the problem.

Dumas Mayor Pro Tem Dr. David Bonner had an item placed on the Commission’s work session Monday to discuss sending TxDOT a formal letter asking them to repair their roads inside the city limits.

“Right now they (TxDOT) have on the agenda to repair Dumas Avenue, in a sense, redo it in 2018,” Bonner said. “But that’s too late. We need it today.”

But it’s not just Dumas Avenue that Bonner says TxDOT needs to fix. North Maddox has reached a state of deterioration he says is a cause of major concern.

Bonner said he doesn’t know what TxDOT’s intentions are, “but they’re not getting it done.”

TxDOT, though, can’t control the weather, nor can they stop the heavy highway traffic that moves through Dumas — all day, every day.

“TxDOT has been and (will) continue to work in collaboration with the city of Dumas and Moore County to improve safety and mobility on U.S. 287/87 (Main Street) and other roadways in the area,” TxDOT Public Information Officer Paul Braun said. “A reconstruction project on U.S. 287/87 is scheduled and the process has begun to conduct soil and pavement tests in anticipation of that project. In the short term, TxDOT maintenance crews will do what work they can to repair problem areas on the roadway until the reconstruction project can be done.”

Still, because roadwork is an outdoor job, TxDOT’s maintenance projects are at the mercy of the weather. Temperature, humidity and wind are factors that can limit when hot mix is applied, forcing TxDOT to wait until mid April to begin hot mix work. The temperature has to be 50 degrees and rising and not fall below the low 30s. During other times of the year, TxDOT can fix potholes with cold patch, but it’s a temporary fix. Weather and wear will drag out the material, and TxDOT is back to square one, filling it in again.

“(It) needs to be repaired as soon as possible, as in right now,” Bonner said. “The people in this city are pretty exasperated with this. People in this city, and this body in particular, have been extremely patient. It’s just time to say, ‘Listen. We just want you to know formally we’re ready.’”

Bonner proposes writing a letter to the local TxDOT office, and if they say work on the potholes will begin in the next month or month-and-a-half, it’s as far as it has to go. If they don’t have the equipment or resources, Bonner suggests contacting the regional office to ask them to give the local office the money to repair the streets.

But the problem isn’t as easy to fix as the commissioners would like. A freeway runs through Dumas Avenue, and until that traffic is addressed, Dumas Avenue will continue to suffer, especially during a wet year. TxDOT plans to cover the street with concrete in 2018, which will be better suited to take the pounding axle weight it’s subjected to.

So, the city of Dumas will send a letter to TxDOT, and Bonner will write it.