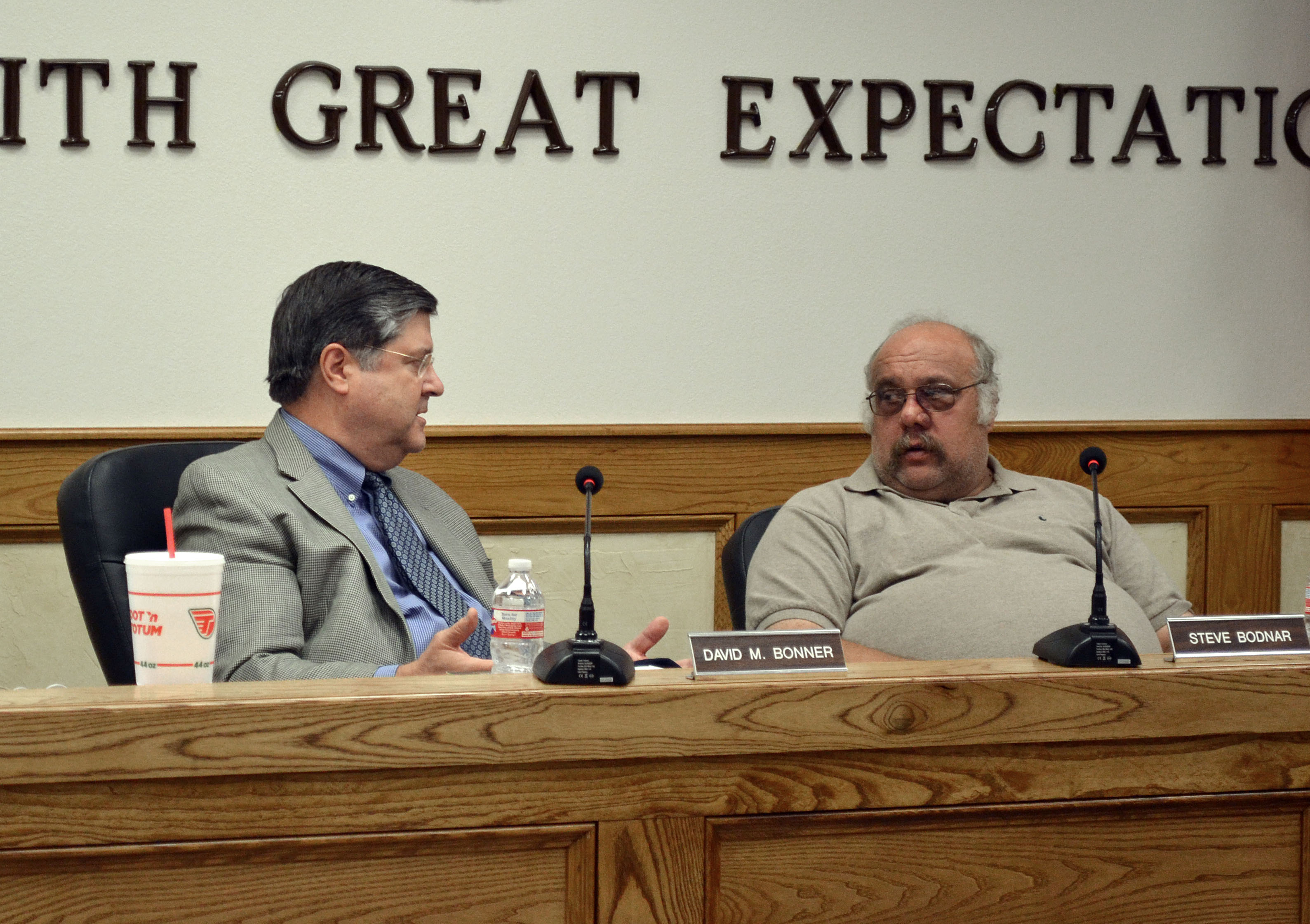 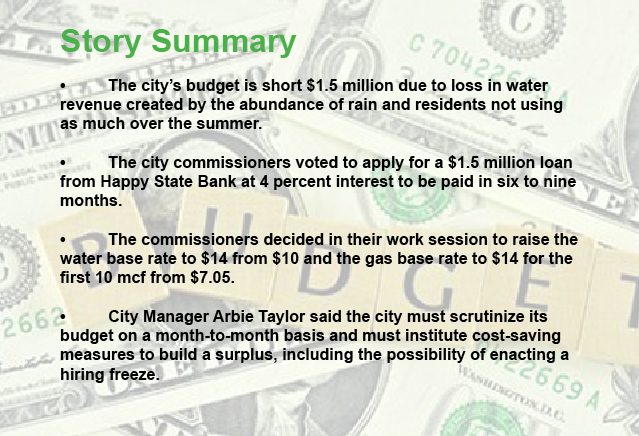 [Editor’s Note: This story has been updated.}

Answered prayers always seem to come at a cost, and in the city of Dumas’ case, it means a loss of about $1.5 million. The abundance of rain over the summer, a blessing for many, has cost the city that much in lost revenue, forcing it to apply for a bank loan to make a debt service payment and sending the City Commission into an hours-long discussion about how to balance the city’s budget in spite of capricious weather patterns, including raising the water base rate 40 percent and the gas base rate 98 percent.

The City Commission voted Monday to apply for a $1.5 million loan from Happy State Bank, less than a week after they were told the city doesn’t have the money to make a debt service payment due Sept. 1.

“Because Mother Nature has blessed us with rain, it has hindered our revenues which are a big chunk of what we rely on for cash flow,” City Manager Arbie Taylor said. “To date, we have pumped about 200 million fewer gallons of water than we did last year. We are well under our sales this year, so the cash flow has not come in as we had planned.”

Monday’s meeting came less than a week after Finance Director Dottie Crockett told the commissioners about the revenue loss during their budget work sessions last week, and two of the commissioners asked her why weren’t they alerted sooner.

“This has been creeping up for awhile,” Commissioner Steve Bodnar said. “I’m missing something. Why was it that last week was the first time it was brought up? I would have liked some warning before the middle of last week when I thought we had a nice, fixed budget.”

Crockett said the deficit had been on her radar.

“I should have set the alarm sooner,” she said.

“Why did we go through this whole budget process and remain uninformed of this?” Mayor Pro Tem Dr. David Bonner asked.

Crockett said the information wasn’t highlighted in the financial package the commissioners receive each month, and she doesn’t tell them “what to look at.” She also thought July’s revenues would be higher, she said.

But Commissioner Ben Maples said the revenue problem had been building too long to be corrected in one month.

“We were far enough down in June that we wouldn’t have made it up in July,” he said.

During their work session Monday, the commissioners and Taylor discussed raising water and gas base rates in order to ensure the budget isn’t devastated by unavoidable revenue losses such as less water pumped during a wet summer. Taylor said he’d like the water base rate set at $20, which is currently at $10, saying it gives them “the opportunity to build some reserves.”

“I hate it for my fixed-income people, but at the same time, we’re not outrageous,” Taylor said. “We’re not gouging anybody. We’re putting a reasonable price on a service we provide.”

“We’re not making the profit from our gas company it needs to make,” Bonner said. “If we go to $14 in water or $13 in gas, we’re still way below what Amarillo pays.”

Taylor gave the commissioners utility rates for nine surrounding cities, and it shows Dumas consumers pay some of the lowest for water. Plainview’s water base rate is $31, and Pampa’s is $23.34. Only Dalhart pays less at a $6 base rate. Taylor, however, pointed out that Dumas’ trash rates are too high at $28. The information didn’t have the cities’ gas rates, but Taylor said Amarillo residents pay almost three times more than Dumas.

Taylor and the commissioners discussed other ideas to boost the budget. Taylor said he’s spoken with the city’s department heads about instituting a hiring freeze.

“In order to get this ship of state pointed in the direction it needs to be, we have to make some adjustments,” Taylor said. “We’re going to have much more scrutiny on day-to-day expenditures that we’ve taken for granted. We need surplus revenue coming in, and we can build it by paying as we go for things that in the past we’ve said, ‘We can finance this for three years and get by.’ Why, when we need to be building surplus? There will always be peaks and valleys. I’m trying to cut the peaks and fill in the valleys. That means a month-to-month scrutiny for every single thing that comes in and goes out. And that starts yesterday.”

“We are far from that,” he said. “We’ve just gotten off track, and we’re going to be looking at our revenues in a more logical way. That’s why we’re hitting the base rates. We just wanted to bring it back to you for your approval. What do we need to do with the rates to balance the budget?”

He also suggested that people over 65 years old wouldn’t be affected by the proposed base rate increase. The commissioners left the meeting with the agreement to vote during a future meeting on an ordinance that would raise the water base rate to $20 from $10 for the first 3,000 gallons and gas to $20 for the first 1 mcf from $7.05.