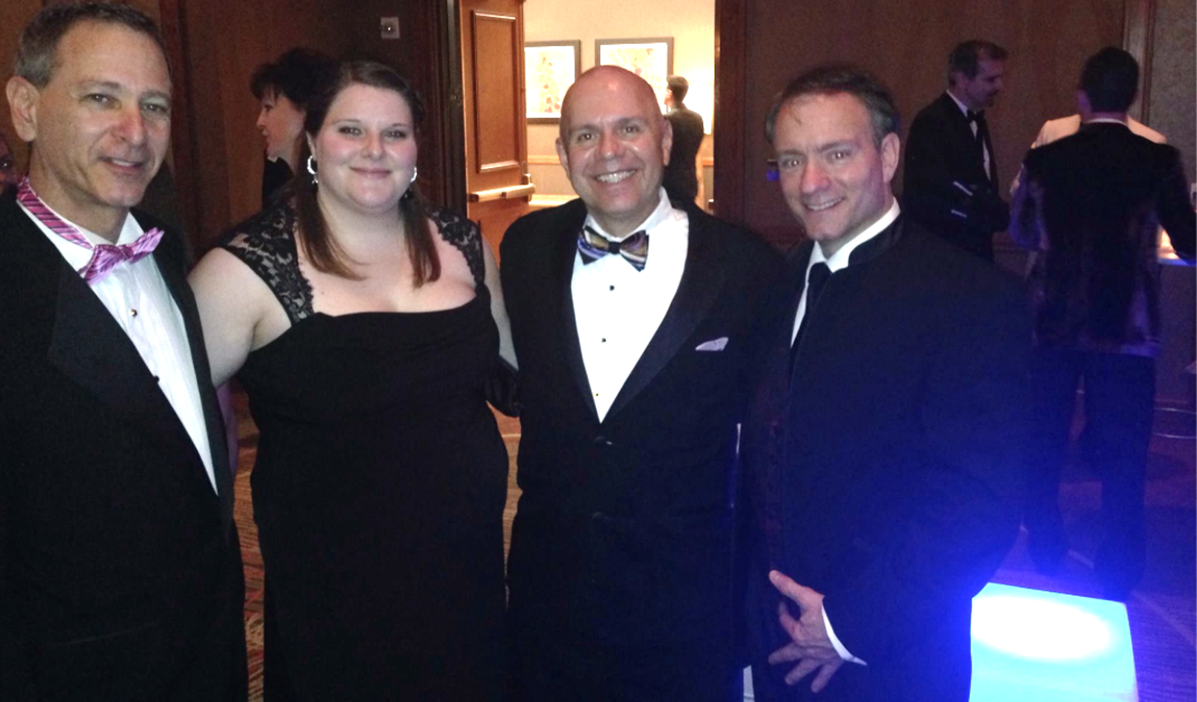 Above: Some of my Dallas Voice c0-workers and me at Black Tie in Dallas in 2013. I’ve never made it a secret that I was the senior editor of one of the nation’s largest LGBT news and lifestyle magazines.

During the weeks after a lunatic murdered 49 people on June 12 inside Pulse, a gay nightclub in Orlando, I tried to scrape together words that might coalesce into a string of paragraphs, each one rippling into the next until I had a story about hope for a nation reeling from too many mass murders. I sat down at the computer many times to write the story, but the words wouldn’t come. I felt like I was inside one of those booths where air is blown into it to keep dollar bills swirling around, and you’re supposed to grab as many as you can — except I was trying to grab words. I only could snatch a “pain”, a “horrific”, a “murder”, a “homophobic”, disordered words I didn’t know what to do with. Until today.

The news about the murder of five Dallas police officers hit me around midnight as I was getting ready to leave the office. I usually try to catch up on some of the news before I leave, but because I’ve been so tired, I wasn’t sure I was reading the story about the murders correctly. Five officers murdered? In Dallas? No. Yes. I sat down and started looking for other news sources, found video of the mayhem in downtown Dallas and tried to get my tired brain to comprehend this latest slaughter of American lives. I read the news with a shock I hadn’t felt since I watched the Twin Towers pancake to the ground. I scoured the internet for more news for another hour before going home. I didn’t fall asleep until about 5 a.m.

The murder of five police officers excavated my ability to put a lucid sentence together, and I could feel clarity returning after almost a month of not being to do much writing. I hadn’t been able to put my finger on it until today, but it was the hate that only hell can produce that buried me with confusion. Only hate can drive a person to murder, and only evil can drive them to kill so many at one time. I’ve encountered evil before, but the murder of 49 people in Orlando locked down my brain. It took Dallas to free it.

I’ve made no secret that I was the senior editor of Dallas Voice, one of the nation’s largest LGBT news and lifestyle magazines. That information is included in a bio that appears in every story I write. I’m proud of the work I did at Dallas Voice, and I never considered hiding it when I came home to Dumas. When I was working at Dallas Voice, the LGBT community was fighting for same-sex marriage, and the opposition fought us with legal and emotional flame throwers. They blasted us with hate, but many of us were veterans of that kind of warfare, and we stood firm. My concern was that someone blinded by hate and fueled by evil would walk into one of Dallas’ gay clubs and spray the crowd with bullets. I made sure I always stayed by an exit when I was in one of the clubs. So I wasn’t shocked when Orlando happened, but the murders were like a bomb that deafened and disoriented me. Forty-nine people. Forty-nine people hated for being gay or a gay ally. Even for someone who has seen so much hate hurled at the gay community, it was too much. It blasted me against the wall and then kicked me in the teeth. Since then, I’ve been stumbling around, trying to write, but surprisingly, it was hate I encountered today that yanked me to my feet. It was the anger of being targeted again that restored the ability to reach for the right words and get back to work.

I went to the police department today to take a picture of some of the officers lowering the flag to half staff in honor of the fallen Dallas police officers. Some of those Dumas officers made no effort to let me know they didn’t like me or want me there. Someone later told me the officers blame much of what happened in Dallas on the media, and I, being part of the media, am not liked. It doesn’t matter that I have never written a negative story about any Dumas law enforcement officer. It doesn’t matter that every story I have written about the police and sheriff’s departments since I started the Journal has pretty much been a public relations piece that showed the good things they have done and are doing in the community. After Dallas, none of that mattered.

I know better than most people how some journalists have helped build a hostile attitude toward law enforcement. The broadcast journalists feed a beast that wants news 24/7, so they keep the flames of places like Ferguson going, kicking the embers when the fire subsides to get it to roar again to keep their viewers. They do it with any sensational story. I, too, agree that irresponsible reporters have done their part to put law enforcement officers in danger. But I’m not one of them, and to lump me in with them is the same as if said all cops are bad because some of them are. That’s not rational, and it certainly isn’t fair.

I know there are Americans who hate cops right now, but I want to tell those cops that I’m no stranger to hate, either. The gay community is no stranger to people who for hundreds of years have killed us, imprisoned us, ostracized us and declared us mentally ill. I remember when I first started going to gay clubs in the late ’70s in Dallas, the police often raided them. We were harassed, some of us were knocked around, some of us were arrested. Some of us were hurt. Do I hold a grudge? Nope. Do I think cops are bad because of what happened then? I do not, even though I can name time after time when gay people have been the targets of hate and murder. I sometimes still feel the hate in Dumas.

I would like for you to think for just a second what it feels like to hear people talk about gays with hate in their voices. How it feels to hear someone use the word “fag” as an insult, or to say, “That’s so gay” also as an insult. It happens pretty much every day in Dumas. I move on, otherwise I’d be fighting after breakfast and twice before supper. Think about what it feels like to have ministers say you’re an abomination and others say it’s a choice. Really? A choice? Then when did you choose to be straight? Do you really think someone would choose to live a life that puts them in danger and exposes them to being ostracized by family and friends? No matter what someone would like to think, it’s not a choice, and using words like “fag” and saying, “It’s so gay” only keeps the hate toward the gay community alive and keeps the targets on our backs.

I now realize that one of the blocks that kept me from writing anything after Orlando was fear, fear that writing something would make me a target, that I’d lose readers, that people would stop speaking to me. These were new feelings because I’ve never been afraid of much of anything, and I’m a little ashamed to realize fear kept me from writing because I’m not the kind of person to back down. I’ll give you an example. About 15 years ago, I was the editor of a daily paper in another state. A reporter and I were investigating the chief deputy who was stealing confiscated drugs and selling them. He also was doing other illegal things, and the sheriff protected him. About a month into the investigation, the reporter was murdered. Officials found his burned car with him inside it. A week later, they burned my car to the ground in my driveway, but I kept on with the investigation. I’m stubborn to the point of sometimes being stupid. I’m stubborn enough to return to my hometown to start a digital paper, even though I know how conservative it is and how so many people here oppose gay rights. I learned many years ago how to swim in waters that can sometimes be turbulent.

The hate that drove a man to murder 49 people in a gay bar is the same hate that fueled the evil energy to murder five cops Thursday. It’s frightening to see our country consumed with so much hate, and it bothered me deeply to encounter it at the police department today. No matter how tough you think your hide is, there are cracks in it that make us vulnerable. No matter how battle scarred we are, we can still be hurt. I know a little about hate, just as law enforcement officers do, except the gay community (and others) have been living with it just a bit longer. I deal with it almost on a daily basis in conservative Moore County. Still, I chose to come home to Dumas, and I don’t regret it. I’m strong enough to handle whatever the homophobes throw at me, and I know the law enforcement community is strong enough to handle the evil thrown at them. We’ll sometimes be knocked to our knees, but we can all, as Americans, help each other get up. But don’t let the hate that’s thrown at you turn you into a hater. They’ll win if you do — and that will blow the firestorm even higher.