Home NEWS DHS to host Maker Faire — where you just might see the... 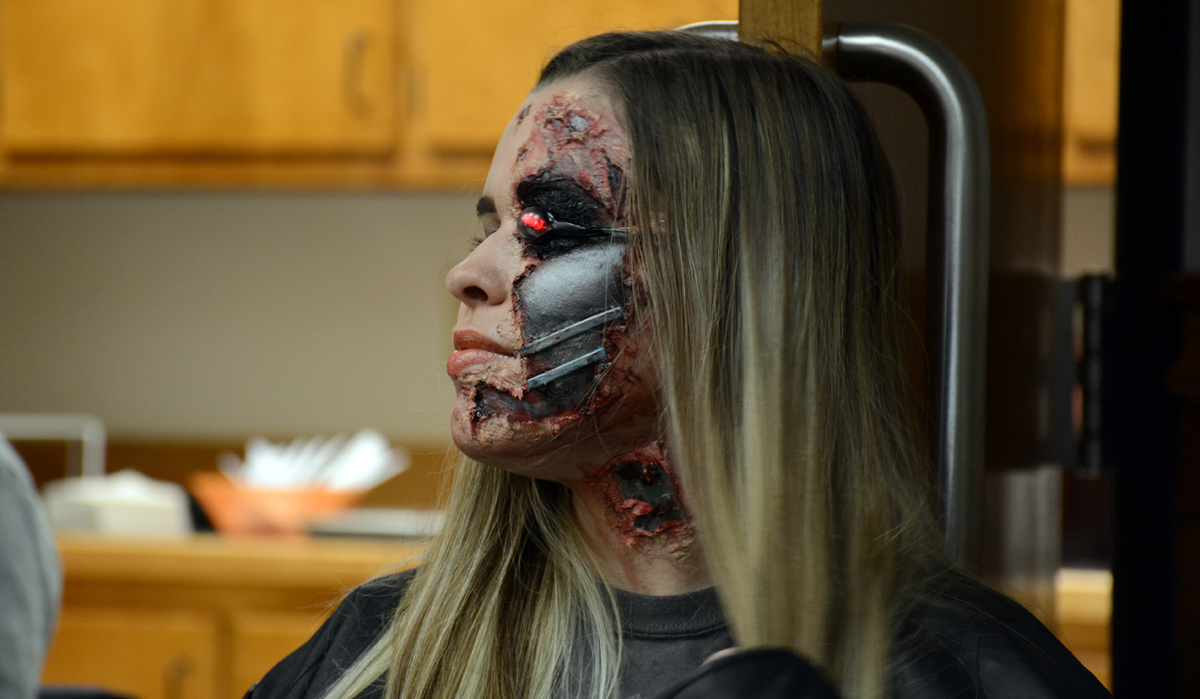 Above: Chelby Rhoades, a junior at Dumas High School, shows the DISD Board of Trustees her skills as a makeup artist. Rhoades will be one of the students showing their innovations at the Maker Faire on Wednesday.

You never know what you’re going to see at a fair, or in this case — a faire. The name evokes images of an energized venue crowded with booths straining with samples of innovative, offbeat and just-out products and technologies. From the thrilling to the shocking, you can bet you’ll find it at a faire. Even the uncommon spelling suggests the offering of something different, and Dumas High School is going to host that kind of event.

During the past few months, students have been doing what brilliant innovators have done since man discovered fire — how to put the discovery to use. On Wednesday, during the school’s first Maker Faire, the young inventors will unveil their work, and it looks to be an event that would have sent Thomas Edison’s head spinning.

It would be difficult to describe what Maker Faire is with one adjective, although bewildering comes to mind. It’s an international phenomenon, a gathering of tech enthusiasts, crafters, tinkerers, hobbyists, artists, scientists, engineers and anyone else who has had an idea of how to build a better mousetrap, harness the wind for energy or, as in the case of DHS junior Chelby Rhoades, use the ordinary to create something extraordinary.

After DISD Director of Information Michael Keough explained what Maker Faire is to the Board of Trustees on Monday, Rhoades walked up to the horseshoe, fixed a glowing red eye on them and told them about her passion for makeup. It explained why one side of her face looked like the Terminator.

“I’ve always loved, loved, loved makeup,” Rhoades said. “I usually can do this kind of thing only at Halloween.”

Rhoades told the trustees how she used pieces of an iPhone, a garage door opener, an LED light and latex to make the left side of her face and neck look like someone took a cutting torch to it and then polished it off with sandpaper. The quality of the job would do a Hollywood makeup artist proud, and it’s exactly the talent students are encouraged to show at Maker Faire.

“This is the beauty of Maker Fair,” Keough said. “No matter what the student is interested in, they can participate. It does, however, fuel technology programs. For instance, if a student is not very interested in technology but wants to be a dress designer someday, they could use traditional tools to build their dress, but then at the Faire, they might see other students’ projects and realize technology can be integrated into clothing.”

Or in Rhoades’ case, topping off her makeup artistry with an LED light and using it for a glowing eyeball.

The Maker Faire website says it’s “the Greatest Show (and Tell) on Earth — a family-friendly festival of invention, creativity and resourcefulness and a celebration of the Maker movement.” The launch of MAKE magazine later spun off the Maker movement and Maker Faire, which the website says, “is primarily designed to be forward-looking, showcasing makers who are exploring new forms and new technologies. But it’s not just for the novel in technical fields; Maker Faire features innovation and experimentation across the spectrum of science, engineering, art, performance and craft.” And they’re being held all over the world. In 2014, 119 independently-produced Mini and 14 Featured Maker Faires occurred around the world, including Tokyo, Rome, Detroit, Oslo and Shenzhen, the website says.

In Keough’s words, Maker Faire is a venue for students to explore who they are, or want to be, and take something that doesn’t exist and bring it to life. Students like Rhoades have the advantage of learning from YouTube videos. Name it, and someone has probably attempted it. The students’ creations might begin with a Google search, sparking an idea that drives the innovation. It’s the same tinkering that led to someone bending a wire and creating the paper clip. No doubt, it made people slap their foreheads and say, “Why didn’t I think of that?” Or, who would have thought to add a strip of adhesive to small square of paper, build a stack of those squares and call it a Post-it note? Tinkerers and innovators, that’s who, and we’re back to the Maker Faire.

So let’s just call the event an energized venue crowded with booths straining with samples of innovative, offbeat and just-out products and technologies. Will the design of the next social media craze or a better mouse trap be debuted at the DHS Maker Faire? Find out Wednesday. Maker Faire will be held in the middle gym and will be open to the public.