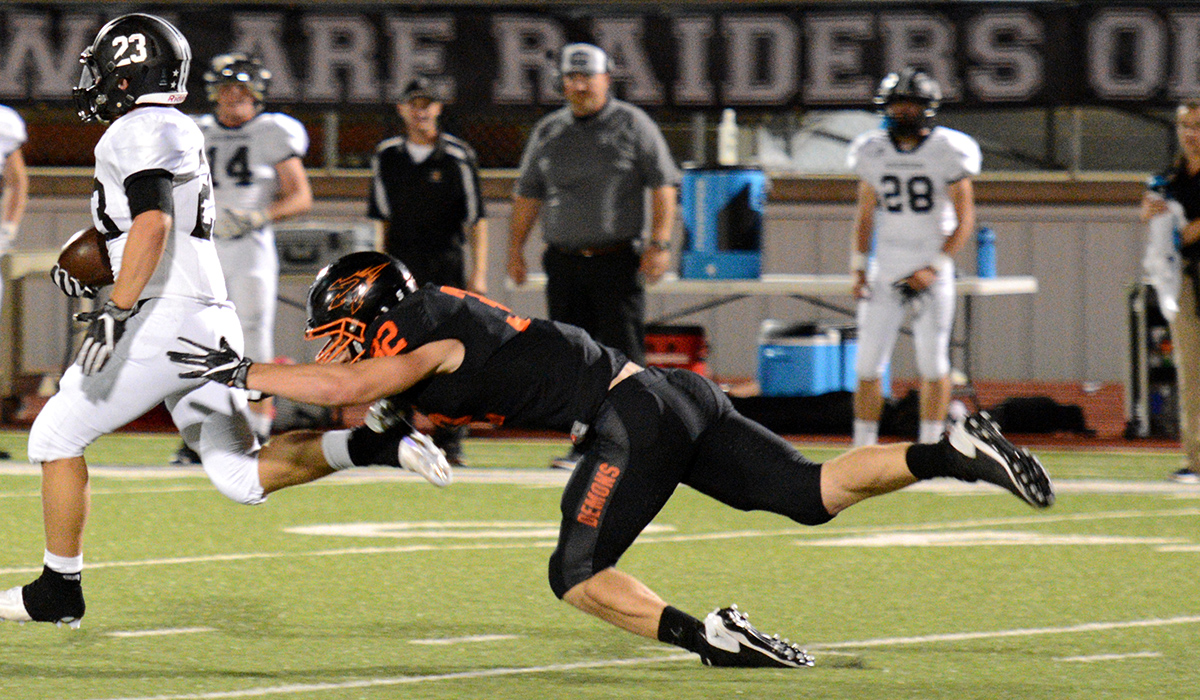 Above: Derek Ditto aims for a Raider take-down. Ditto tallied 14 tackles, 12 of them solos.

The Demons broke a seven-year losing streak to the Randall Raiders on Friday, beating them with a solid 29-14. On paper, the match-up looked lopsided as the Demons entered the contest with a 3-0 record, while Randall went in 0-3, but when the lights came on, both teams fought for the pole position in District 3-5A.

Randall’s record this season doesn’t diminish their strength. Their losses have been at the hands of two undefeated teams, Lubbock Coronado and Lubbock Monterrey, who moved from 6A to 5A this year through UIL realignment. Another undefeated team, Lubbock Cooper, also handed Randall a loss.

“We have the utmost respect for the Randall football program,” Head Coach Dunnam said. “They are the two-time returning district champions and have that crown until someone can take it away.”

Both teams began the night by trading punches, but through a dominant defensive performance and a physical smashmouth offense, the Demons imposed their will and found the end zone midway through the first quarter on a 29-yard touchdown pass from Noah Quintanilla to Keishaun Harper. Randall answered early in the second quarter when quarterback Koby Wood found Cody Gattis in the end zone on a 23-yard touchdown pass. The first half of play ended in a 7-7 tie as Dumas had points taken off the scoreboard by an unwanted penalty.

In the second half, Dumas kept the Randall offense off the field most of the night. Senior linebacker Derek Ditto led the Demon defense with an outstanding performance, tallying 14 tackles, 12 of them solos, and 10 for a loss. He also had a safety and a fumble recovery. The Blakshirt Defense held the Randall offense to a conservative 212 total yards.

“Derek had a phenomenal night,” Dunnam said. “He is such a tremendous player and even better young man. His leadership is infectious, and he is beginning to see the benefits of all of his hard work and dedication to this program.”

The Demon offense found pay dirt on their first possession of the third quarter. Stetson Rios capped off a 67-yard drive by plunging into the end zone from 2 yards out. Rios finished the night with 176 yards rushing on 25 attempts.

“Wow! That’s what I say when I think of Stetson’s performance,” Dunnam said. “What a physical kid. I admire the passion and effort Stetson puts into every aspect of his game, from carrying the ball to blocking to his leadership. He is relentless.”

Dumas also had scores from Quintanilla on a 15-yard run and another 2-yard run from Rios. The Demon offense finished the night with 309 yards on the ground and 51 yards through the air, totaling 360 yards.

The Demons play their second district game Friday at 7:30 p.m. when they host Palo Duro. The Dons enter that contest following a district-opener loss to Plainview.