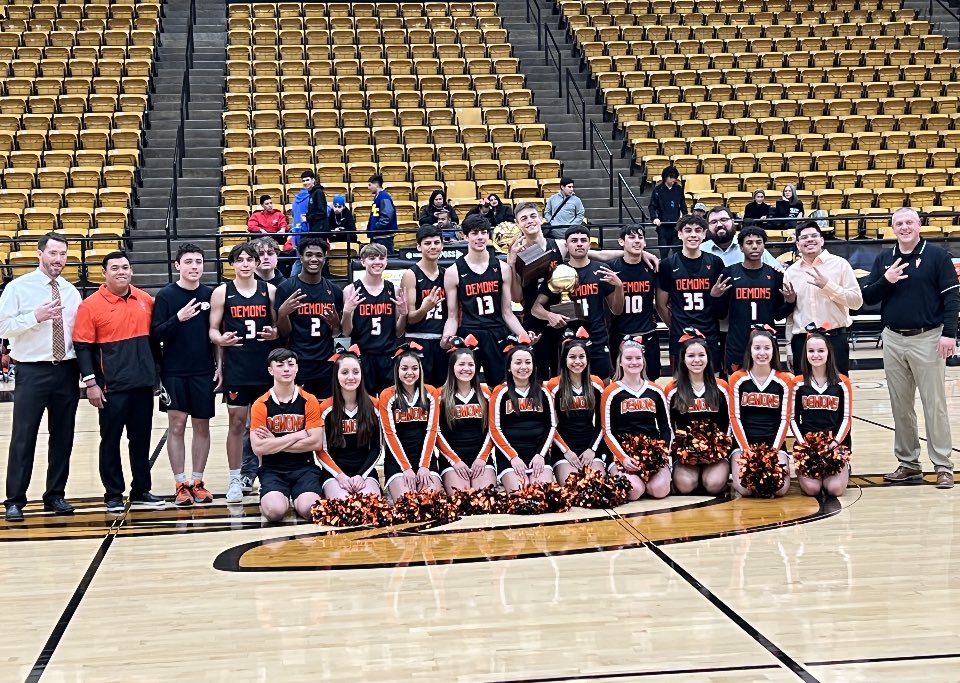 SEMINOLE, TX – Cristian Kelso and Johnny Reynaga combined for 51 points, and the Dumas Demons advanced to the Regional Quarterfinals with a 71-54 victory over the San Elizario Eagles Friday in an Area Round encounter at Seminole High School.

Kelso connected on 12-of-17 shots to finish with a game-high 26 points. The 6-foot-3 senior also tallied six rebounds, four assists, and a steal for a red-hot Demon team that has outscored opponents by a 140 to 93 margin in two postseason outings.

Reynaga dropped 25 points and dished out 12 assists in another stellar performance. The senior point guard also added a pair of steals, a block, and two rebounds.

Coach Randy Ray’s squad set the tone early with a dominant defensive effort that limited San Elizario to just two points in the first eight minutes of play. Reynaga opened the game with eight straight points, and the Eagles missed 11 consecutive shots to finish the quarter.

The Demons started the second quarter with an 8-0 run to push their lead to 20-2. However, San Elizario regrouped and traded baskets with Dumas for the remainder of the first half to trail 34-15 at the intermission.

The Eagles made things interesting with a 13-0 run to open the second half to cut the lead to 34-28. But Kelso and senior guard Khamarion Williams combined to score 10 points to fend off the rally and help the Demons take a 49-33 lead into the final quarter of action.

Reynaga scored the Demons’ first nine points in the fourth to give Dumas a commanding 58-39 advantage before Kelso reeled off 10 points to clinch the playoff win.

Williams finished with six points, three assists, and a whopping six steals, while sophomore Dominic Gardipe chipped in six points, 10 rebounds, and a pair of steals.