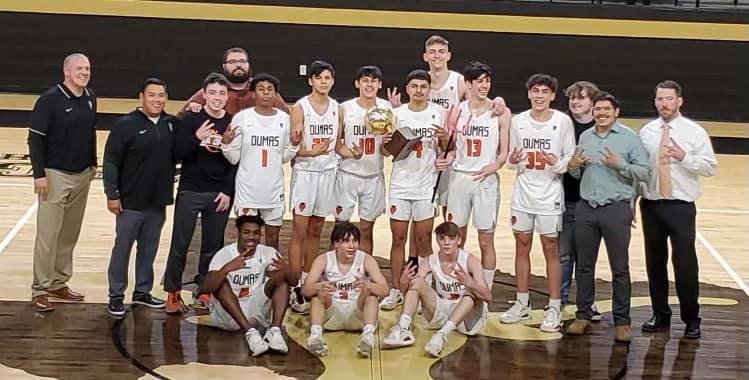 VEGA, TX – Cristian Kelso scored 22 points to help the Dumas Demons capture their first playoff victory since 1971 with a lopsided 69-39 victory over the Levelland Lobos Tuesday in a Class 4A Region 1 Bi-District Playoff encounter at Vega High School.

Kelso turned in a stellar outing on both ends of the court. The senior scored the first six points of the game for Dumas and finished with four rebounds, six steals, and four assists.

“It’s a crazy moment, Kelso told Big Country 95.3 after the final buzzer. “It was a really fun game, I’m just so happy to bring it back to Dumas.”

Levelland (12-23) grabbed an early 2-0 lead before the Demons reeled off eight straight points. Johnny Reynaga scored seven of his 12 points in the opening quarter to help Dumas take a 15-10 lead after eight minutes of action.

“We knew we had to push the tempo like we always do,” said Reynaga. “They like to run their set plays on offense to slow the tempo down, but we executed and played our game.”

“It’s (playoff victory) special to us, Coach Ray, to the whole community of Dumas,” added the senior point guard.

The Demons broke open a tight game with a dominant second quarter. Junior Matthew Reynaga, who tallied 10 points, drilled a three-pointer to start the onslaught and Dumas outscored the Lobos 20-9 to take a commanding 35-19 lead into the locker room.

The Lobos opened the second half with back-to-back buckets, but three-point bombs from seniors Issac Ortiz and Jerry Rodriguez pushed the lead to 41-23. Levelland answered back with a pair of baskets before the Demons went on a 14-4 run to end the quarter with a 55-31 advantage.

Kelso and junior shooting guard Nathan Gomez combined to score 11 of the Demons’ 14 points in the final quarter to help Dumas win its first playoff game in over half a century.

Gomez finished with six points, two rebounds, and a pair of assists, while 6-foot-7 junior Evan Hernandez had four points and five rebounds.

“It hasn’t really hit me yet,” exclaimed Ray. “It kind of feels like I am in a dream right now. 51 years is a long time so it’s really good to get that little monkey off our backs.”