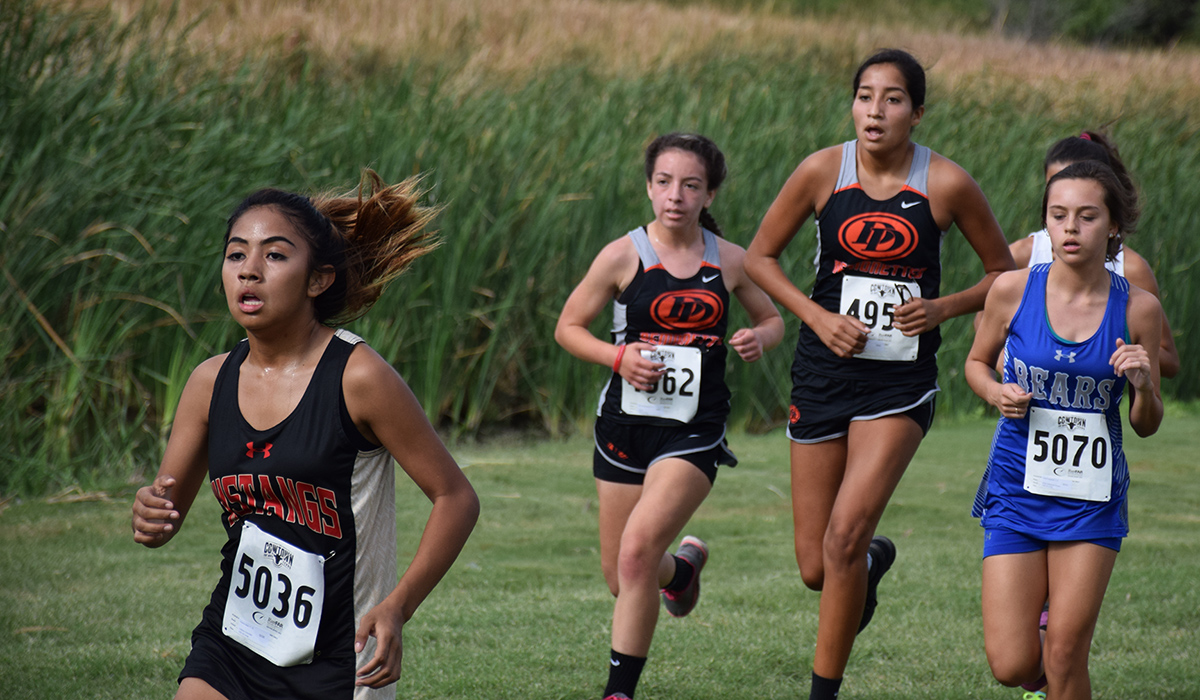 Above: Photo by Michael Keough

The Dumas High School cross country team ran at the Lubbock Invitational this past weekend. We had some very positive finishes, but we also had our eyes opened to what we need to do before district and region if we want to make it out this year.

On the Varsity Girls side, we have been talking about chasing Amarillo High the past couple of weeks, and we did make some movement towards them. Amarillo High finished 11th and we finished 15th in a field of 26 teams. We had a few girls who made some improvements on their times and either got closer to the Amarillo girls who were ahead of them, and a couple who even passed the girls they were going after. Of course with a larger field of runners (160 total runners), the point differential is going to be a lot more drastic than what the district race will be since there will only be a max of 56 runners. With all of these variables, and the fact that our No. 1 runner at the time (Bridgett Cadenhead) was not running due to the volleyball game in Canyon, I think it is a vary attainable goal for our girls to go for at district. What makes these girls so special is they are finally seeing the improvement themselves, and they continue to build on it. This is going to do nothing but make us that much more successful.

On the Varsity Boys side, we are continuing to impress many other teams that didn’t realize just how good we are this season. The team finished fourth in a field of 26 teams, and we placed three individuals in the top 25 of a 156-person race (Josh Terrazas fourth, Dorion Estrada ninth, and Ary Ortiz 21st) As good as we ran, though, Canyon came out and ran extremely well and placed second behind the current No. 7 team in the state — Justin Northwest, who just beat Canyon by 11 points. I am still very positive that whoever is able to win our district has a good chance to qualify for the state meet in Round Rock, and I firmly believe we can be that team, but just like we did two weeks ago, we are going to have to shorten our gap time (the time between our No. 1 and No. 5 runners) and move back ahead of Canyon. This is not impossible, but it isn’t going to be easy. Canyon was 39 points ahead, and if this was district, they would still be about six or seven points ahead, so we have to work the next two weeks on gaining those seven points and a few more here and there.

Both our JV boys and girls ran this weekend as well, and their times are listed with the varsity teams, but the hosts of the meet did not count their times towards a team score. I will say that both the boys and girls JV runners ran extremely well. We had two JV boys medal in the race (Jayden Medrano, fourth, and David Chavez, 12th), and we had a couple of JV girls who were close to medaling. I am very proud of how they ran and the work they have put in.

This meet was a crazy, but great meet. It gave us a chance to see the regional course with it’s new design due to the bridge being knocked down, and it let us compare other teams in our region without having to worry about teams not in our division. It was a great eye-opener, and we look forward to making our way back there on Oct. 29.

Our next meet will be in Round Rock with just our varsity teams as we will run the state course in the McNeil ​Invitational Saturday Oct. 1.