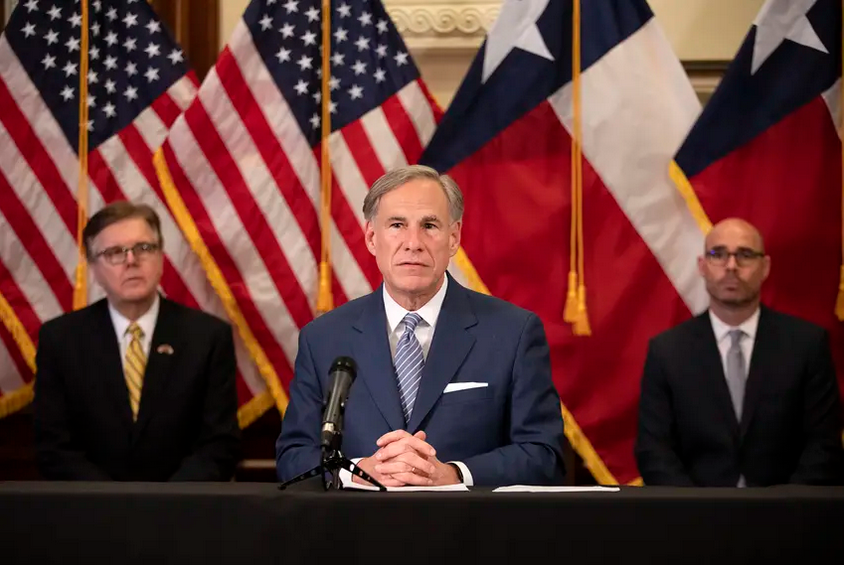 A growing number of Texas county Republican parties are censuring Gov. Greg Abbott over his response to the coronavirus pandemic, taking issue with how he has wielded his broad executive power.

Censure resolutions, which are formal condemnations of an official’s statements or behavior, have been approved in at least six counties. That includes two of the biggest red counties in Texas: Montgomery and Denton, which easily passed a resolution Thursday night.

Some Republicans aligned with the grassroots wing of the party have expressed frustration with Abbott in recent weeks as the pandemic has intensified in Texas — and Abbott has continued to assert executive authority to take sweeping actions to contain it. The censure resolutions accuse Abbott of violating core principles of the party such as separation of powers, free enterprise and personal responsibility.

A spokesperson for Abbott did not respond to messages seeking comment, though Abbott has generally defended the statewide mask mandate that he issued last week — and that seemed to be a breaking point for some in his party.

“I knew that it wasn’t going to be popular,” Abbott said during an interview Thursday evening with KTEN in Sherman. “I knew that it was even counter to what even I wanted, but also I knew that it was something that had to be done. The coronavirus is spreading so rapidly across the state of Texas, the last thing that we want to do is shut Texas back down. The only way we can prevent Texas from being shut down is for everybody to adopt this practice of wearing a face mask.”

The movement began over the weekend with Ector County, home to Odessa. Parties in Harrison and Llano counties have also since voted to censure Abbott.

Over the past two weeks, as the number of coronavirus cases surged in Texas, Abbott has ordered bars to shut down again and issued a directive for Texans in most counties to wear masks in public.

Nearly 2.8 million Texans have filed for unemployment benefits since mid-March, when the pandemic first began taking hold of the state and businesses were first ordered to shut down. Experts have said that the state’s economic recovery will likely be hampered by the continued spread of the virus even as businesses are allowed to reopen. Economists, like Abbott and health officials, have said that if Texans wear face masks in public and practice social distancing, they could not only help the public health crisis, but also the state’s economic recovery.

Abbott’s eventual order requiring face masks came after he resisted such calls for months and at one point banned local governments from requiring individuals to wear masks.

Most of the county party resolutions censuring Abbott request that the delegates to the state GOP convention consider doing the same when they meet next week. While party rules allow delegates to do so by a majority vote, what is less clear is the process by which the issue would be brought to the convention floor.

In any case, a censure would be largely symbolic. If approved at the state level, the resolution would allow the Texas GOP to take sides against Abbott in an intraparty contest and to withhold financial support for him. Abbott is not up for reelection until 2022, and his campaign is far better-funded than the party.

The Texas GOP in January 2018 censured then-House Speaker Joe Straus, saying he was stymying the party’s agenda at the Capitol. Straus’ censure was approved by a vote of the 64-member State Republican Executive Committee rather than at the convention, which was still months away at the time.

The Texas GOP’s 2020 convention remains in flux after Houston officials canceled the event, which was set to happen in-person next week in Houston. The party asked a judge to allow them proceed with the in-person event at a Houston convention center, but party officials said Thursday evening that such a request was denied. The State Republican Executive Committee, which serves as the party’s governing board, is set to meet Saturday to “finalize location matters” based on how the case plays out.

“County Republican parties in Texas’ GOP strongholds say Gov. Greg Abbott going too far in coronavirus response” was first published at https://www.texastribune.org/2020/07/09/greg-abbott-republican-criticism-coronavirus-response/ by The Texas Tribune. The Texas Tribune is proud to celebrate 10 years of exceptional journalism for an exceptional state.

Man convicted of forgery found with another person’s checkbook