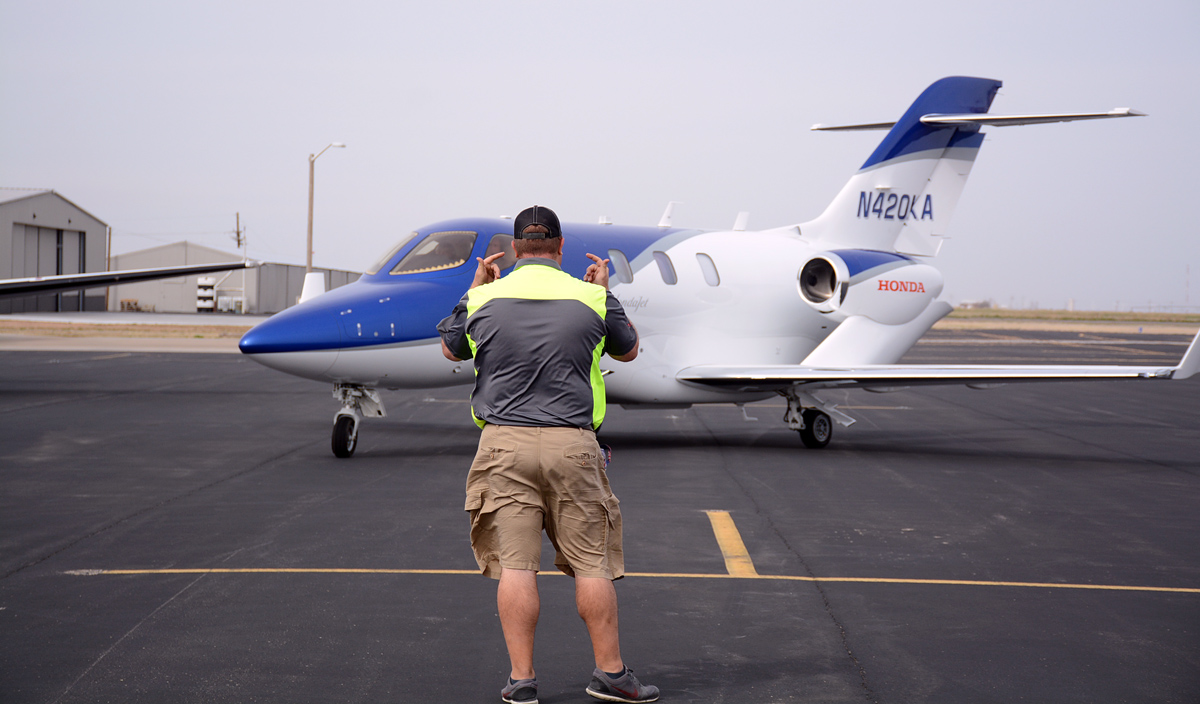 Above: In this file photo, Moore County Airport Manager Brandon Cox guides a $4 million HondaJet on the runway. It’s owner, Mark Leavitt, is a regular customer because of the airport’s low fuel costs. Leavitt said a restaurant at the airport would be great.

It took a few days for the Moore County Commissioners’ Court to make sure the language in a contract with Willis Construction of Dumas to build a $330,400 restaurant at the Moore County Airport satisfies the county’s legal counsel, but they approved it Friday, and construction began Tuesday. The county, though, won’t bear all of the costs.

The commissioners awarded the bid to Willis Construction during their May 9 meeting. Willis also supplied the bid specs in March, and their bid for the 3,200-square-feet restaurant came in at $289,200, which is the amount stated in the contract, but it doesn’t include kitchen appliances, a grease trap, a fire suppression system for the hood and a septic system. The commissioners approved spending an additional $41,200 for those, and they’ll be bid out. They also approved spending $18,800 to build a restroom at the recently completed hangar to accommodate the Moore County Health Foundation’s fundraiser, The Harvest, on Aug. 27, saying a restroom will have to be built at some point anyway. The foundation is using the hangar for their event, and the commissioners said they will amend the budget to cover that cost.

The total amount to build the restaurant, the restroom and adding the kitchen equipment and other needed items comes to $349,200, but the county won’t pay for all of it. Two Routine Airport Maintenance Program grants, one for 2016 and another for 2017 will contribute $186,940 toward the costs. The county’s building fund will provide another $16,000, and the addition of $7,823 that was leftover from the hangar’s construction will reduce the county’s cost to $138,436. However, the county’s outside auditor, James Allen, reminded the commissioners they are committing to spend $349,200.

Airport manager Brandon Cox said the restaurant will be “huge” for the airport, and several Valero pilots who attended the May 9 meeting agreed.

“You’ll end up bringing in more traffic,” one of the pilots said. “A restaurant is something we look for when we fly in to other places, and it’s a huge benefit to the crews. We’re looking at getting in and out as quickly as possible, and we don’t have the time to go into town to eat.”

Another Valero pilot said the airport has such a “beautiful and easy approach” that people would land just to eat.

An occupant for the restaurant hasn’t been identified, since it will have to be put out for bids, but Cox said having the restaurant on the weekends would be a requirement. A restaurant with a wine and beer license also would be a draw, Cox said, and it could boost the amount of money the county would collect.

“We could easily lease the restaurant out for $1,000 a month, and maybe get 1 to 2 percent of their food sales and then 2 percent on beer and wine sales,” Cox said. “We get a lot of people who fly in and don’t want to leave their planes. They want to see them while they’re eating. And the restaurant would give people in the community to go to the airport and see what we’re doing.”

“People pay taxes, and they want good services from the county,” Cartrite said. “They expect something for their tax money. The only downside I see is that I got a call from a restaurant owner who said it would hurt his business. If we catch flak, that’s going to be where it comes from. I’m for it. It would be a good deal for the community and for Valero.”

Providing services to Valero is a given, since their proximity to the airport is the major reason the airport’s fuel prices are so low. How low? Mark Leavitt flew into the airport in March in his $4 million HondaJet, and he said there are only three of four airports in the nation with fuel prices lower than Moore County’s.

“I’m a regular customer here,” Leavitt said in March. “I fly in because the fuel is cheap. It’s that simple. It would be great if there was a restaurant here.”