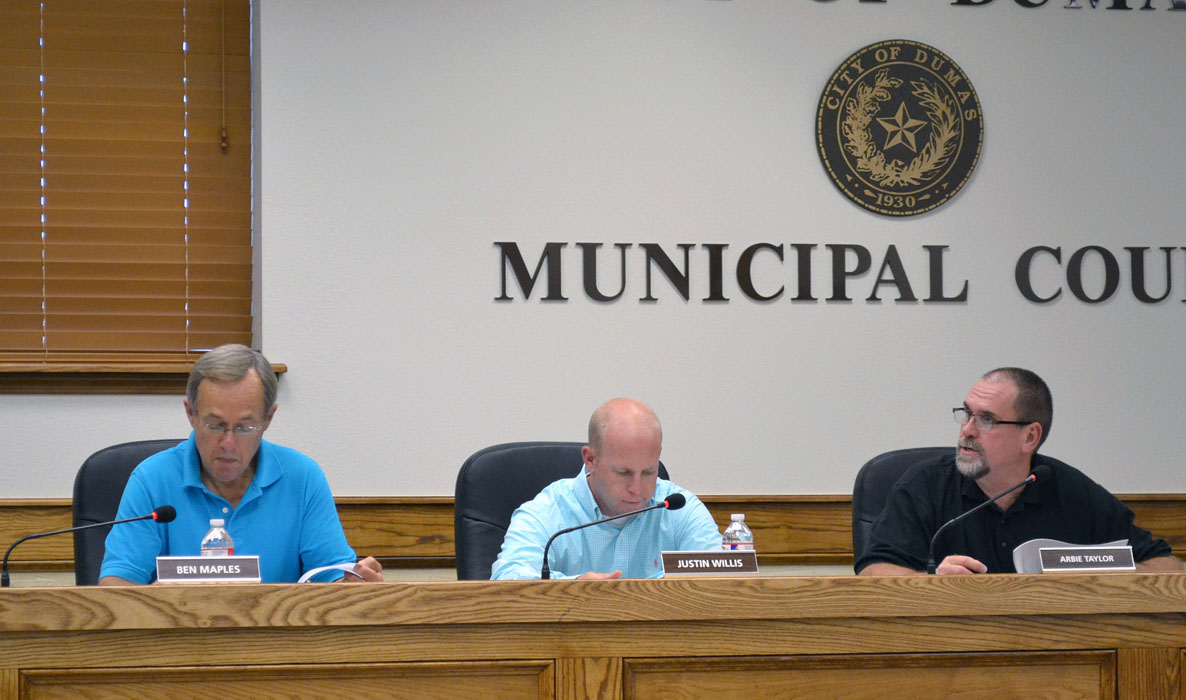 Above: Dumas City Commissioners Ben Maples, left, and Justin Willis consider a bid from a city employee, which caused City Attorney Tom Moore some concerns. City Manager Arbie Taylor is on the right.

A bid to paint a truck that will be used by the fire department  gave the Dumas City Commission pause Monday after City Attorney Tom Moore said the low bidder could have the appearance of a conflict of interest.

Dumas Fire Chief Paul Jenkins told the commissioners he received three bids to paint the truck, which is a condition he must meet to comply with a Texas Forest Service grant he received a few months ago. The truck has to be painted so it doesn’t resemble a military vehicle. Dutcher’s Collision Repair submitted the low bid of $8,959.48, and because the owner of that business, Larry Dutcher, also is a city employee, it prompted Moore to voice concerns.

“I hate to do this because I like Mr. Dutcher and consider him a friend, and I also like to save the city money,” Moore said. “This is a low bid. If he were an employee of the business, I don’t think you’d have a problem, but he’s the owner and a city employee. It does give me some problems. It doesn’t look right, and there may be the appearance of a conflict of interest.”

The commissioners acknowledged Moore’s concerns, and Commissioner Ben Maples made a motion to table the item. There was no second, and it died. Commissioner Steve Bodnar then made a motion to award the bid to the second-to-lowest bidder, which is All Pro Collision Center with a bid of $10,450, but it also died without a second.

Mayor Pat Sims said awarding the bid to a city employee might look odd, but he didn’t believe there’s anything wrong with it.

“The bids were put out equally and fairly,” Sims said.

Bodnar agreed and said he didn’t think anything was done under the table. Sims then made a motion to accept Dutcher’s bid, and Bodnar seconded it. Mayor Pro Tem Dr. David Bonner asked Moore if his concern was the perception or the legality of awarding a bid to a city employee.

“It’s really both,” Moore said. “I can’t say if it’s illegal or not. The perception is there, though.”

Moore said he didn’t research the issue because he didn’t know about it before the meeting.

After discussion, Sims amended his motion to table the issue until the next meeting to give Moore time to research it.

The city received the truck from the Texas Fire Service through a grant, contingent on it being painted within six months. The bids weren’t secured through a sealed bid process because it isn’t required for projects under $50,000. However, the city gathers quotes for projects over $5,000. The truck, which had been a fuel truck, will be used as a water truck for the fire department.