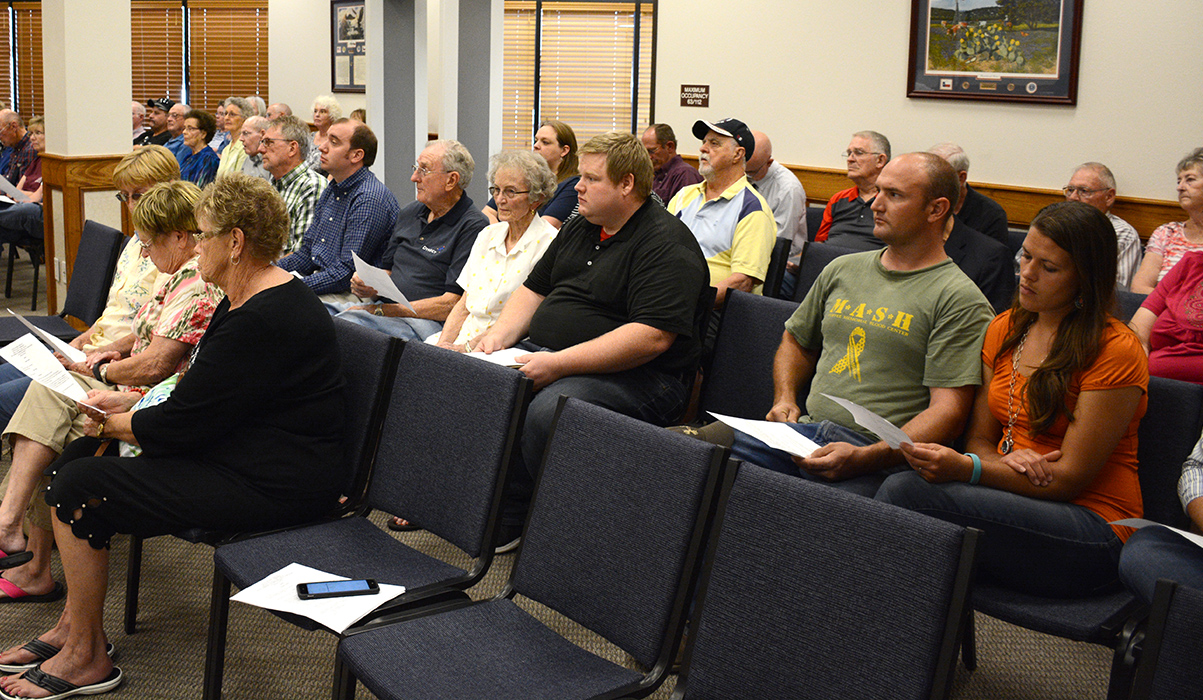 The Dumas City Commission won’t change an ordinance that restricts alcohol within 1,000 feet of school property. There had been discussion during previous commission meetings about looking into the ordinance, but opponents to the change filled the municipal courtroom Monday and told the commissioners it “would be a danger to society” to allow alcohol in a city park.

The Texas Tumbleweed 100 Endurance Ride’s organizers recently asked the commission for permission to give the participants a beer after the end of the run at McDade Park, which put the ordinance on the examining table. At the commission meeting Aug. 1, the commissioners voted against the request because of the ordinance’s prohibition against it, but Commissioner Bob Brinkmann said many people have told him they want to have events where alcohol is served, and there isn’t any reason not to look at it. Mayor Pro Tem Dr. David Bonner said no, and his opposition to alcohol in a city park has intensified each time it’s brought before the commission.

“Who will protect the children?” several of the them asked.

The city can allow alcohol on any of their properties, regardless of the proximity to school property, but conflicting information about Texas Alcoholic Beverage Commission’s laws muddied the discussion at previous commission meetings. It was first said the state won’t allow liquor consumption within 1,000 feet of school property even if the city changes its ordinance, but that was later clarified. TABC will issue a temporary permit if the city requests it. But that won’t happen anytime soon.

Brinkmann and Commissioner Justin Willis emphasizied Monday the commission isn’t ready to change the ordinance, they are only looking at it.

“Because there are at least as many people in this room who have told me they’re glad it’s going to be discussed,” Brinkmann said, referring to the number of opponents present at Monday’s commission meeting. “I believe exploring options and seeing what the community wants is prudent. I want to give other people in the community a voice.”

Bonner asked Brinkmann where are the people who support changing the ordiance? “Why aren’t they here?” he asked. Brinkmann said perhaps they thought telling him how they feel was sufficient.

Willis pointed out the commission isn’t considering opening the parks 24 hours a day to alcohol for an event.

Willis also said the commission could be traipsing into legal snares if the ordinance is changed. If the commission allows one event to serve alcohol and not another, then discriminatory claims could be made. The opponents, though, focused on the community’s safety. They repeated the dangers alcohol in general, and in the parks especially, creates for children.

“Who’s going to protect our children?” one man asked.

Brinkmann said he’d like to form a committee comprised of people from both sides of the debate, but at the end of the almost two-hour discussion, further discussion about looking at the ordinance collapsed. The agenda item died for lack of a motion.