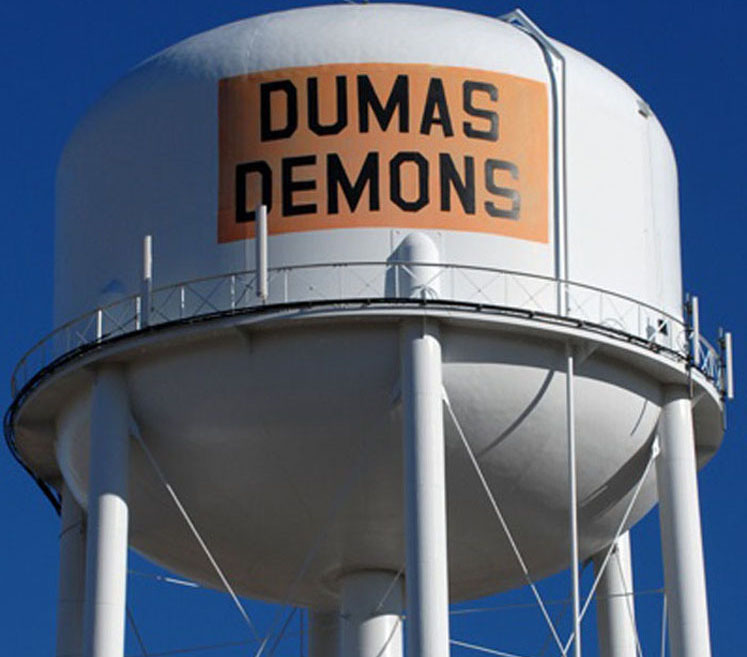 The city of Dumas recently mailed out its 2014 Annual Drinking Water Quality Report, and while it shows the city was cited for several violations, City Manager Arbie Taylor said residents were never at risk of drinking contaminated water.

The Consumer Confidence Report shows the city violated a public notification rule, beginning June 1, 2014, and ending July 31, 2014. Taylor said in that case the city decided not to issue a public notice to boil water because they were confident there was no threat.

“We perform about 15 tests a month of the city’s tap water that is representative of the system,” Taylor said. “We test water from taps in the front of those houses, and there’s one of them that is vacant most of the time. That one address showed the presence of fecal coliform.”

Taylor said the city tested the addresses upstream and downstream from that address, and they were negative. They returned to the address that tested positive in 24 hours, and again it showed the presence of fecal coliform. With two negative tests in a 24-hour period, the Texas Commission on Environmental Quality requires the city to issue a public notice to boil water.

“We had a huge softball tournament going on in town, and issuing that notice would have caused serious disruptions,” Taylor said. “We were absolutely confident the issue was only with that one house because we tested other sites and the wells, and they were negative.”

Taylor said he spoke with former City Manager Vince DiPiazza and the city commissioners about the certainty of the city’s safe drinking water, and they all agreed not to issue the notice, which put the city in violation.

To avoid the possible presence of outside contaminants that can alter the water tests, such as airborne fecal coliform, Taylor said the city now tests water from the meters instead of taps, and they’re conducted inside enclosures.

Another violation occurred Oct. 1, 2013, after a city employee failed to collect the water samples for the testing of lead and copper, causing the city to turn them in late.

“Once we got them in, the tests were OK,” Taylor said.

The employee then failed to provide the results of lead tap-water monitoring to the residents at the location where the water was tested within the prescribed time period.

“That employee was terminated,” Taylor said.

The TCEQ requires every community public water system to provide a Consumer Confidence Report to their customers by July 1 of every year, which includes information from the previous calendar year. It provides consumers with information about the quality of drinking water in an easy-to-read format.

Click on this link to see the report online.

Click on this link for information to read more about the Consumer Confidence Report and the information it contains.

Read the Agreed Order below which describes the enforcement action. 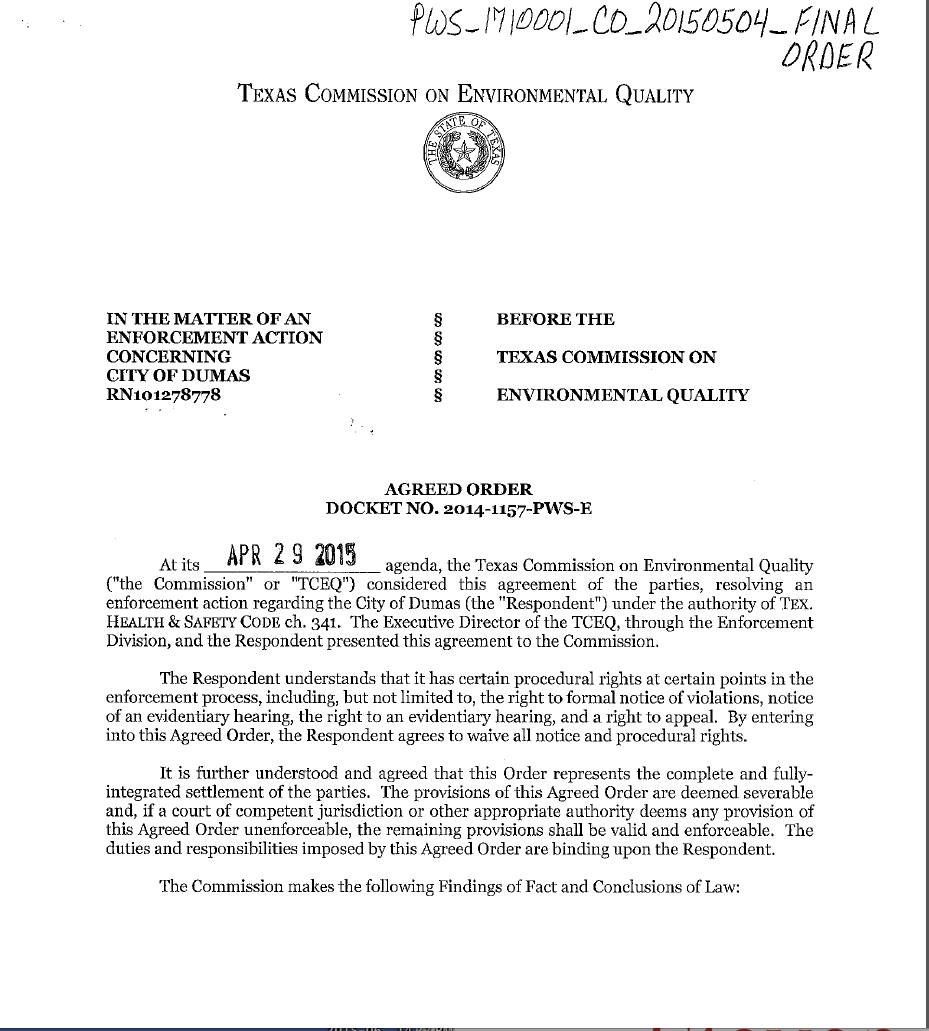 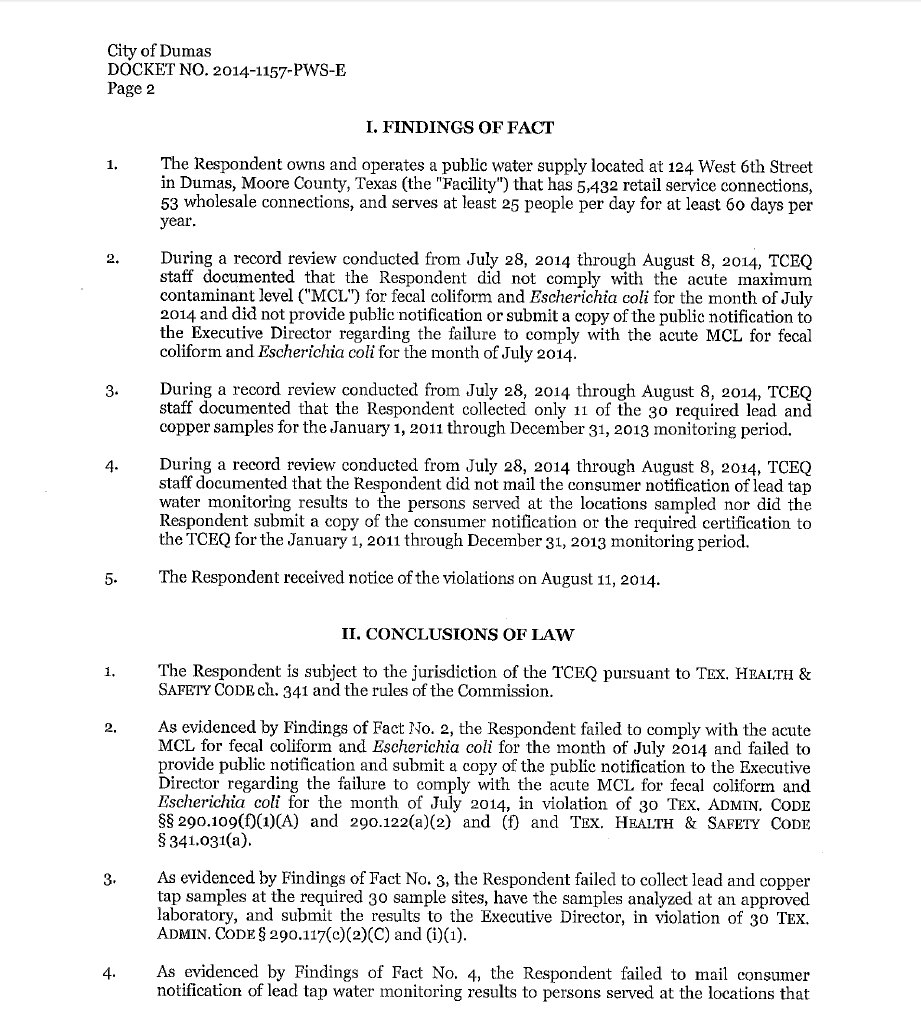 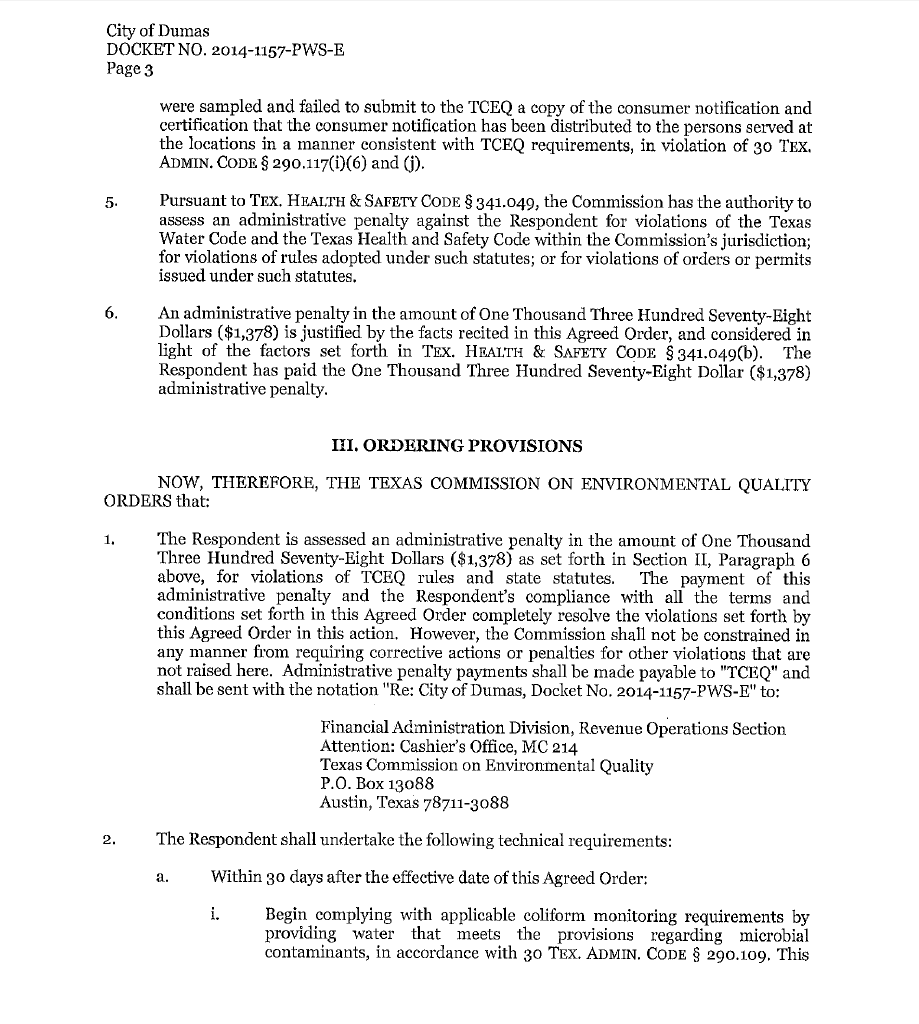 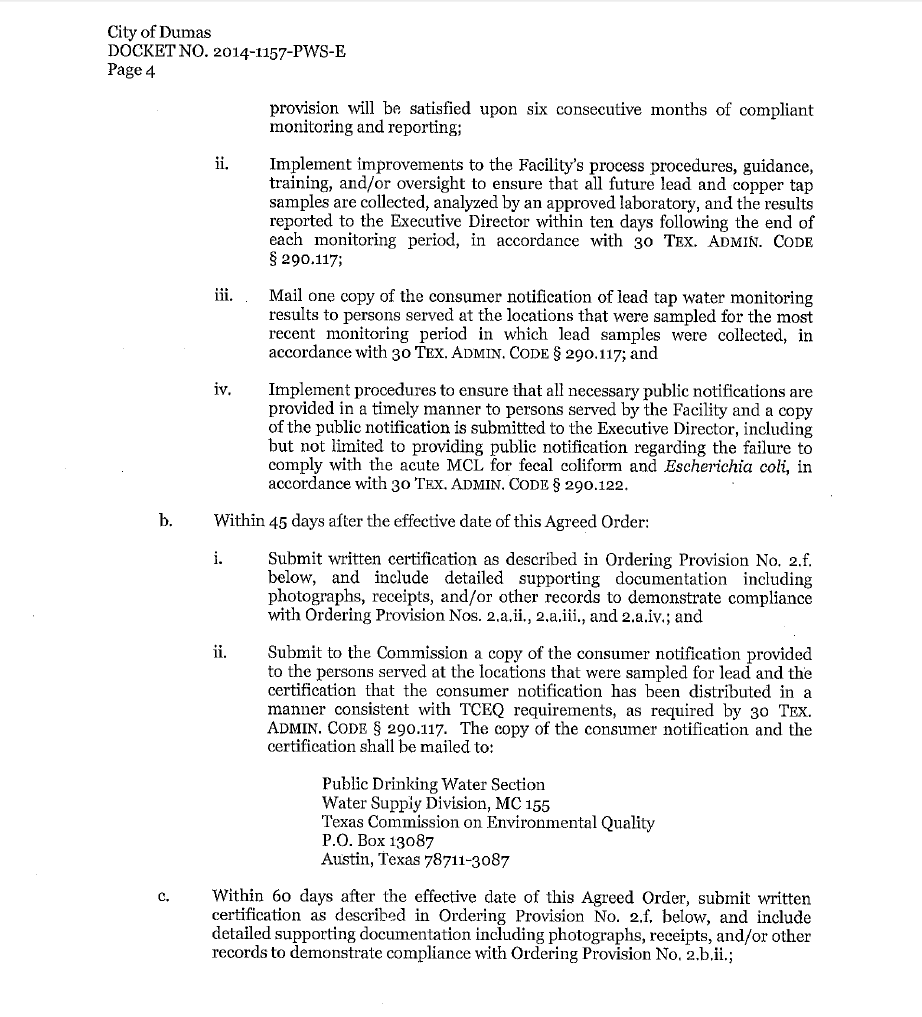 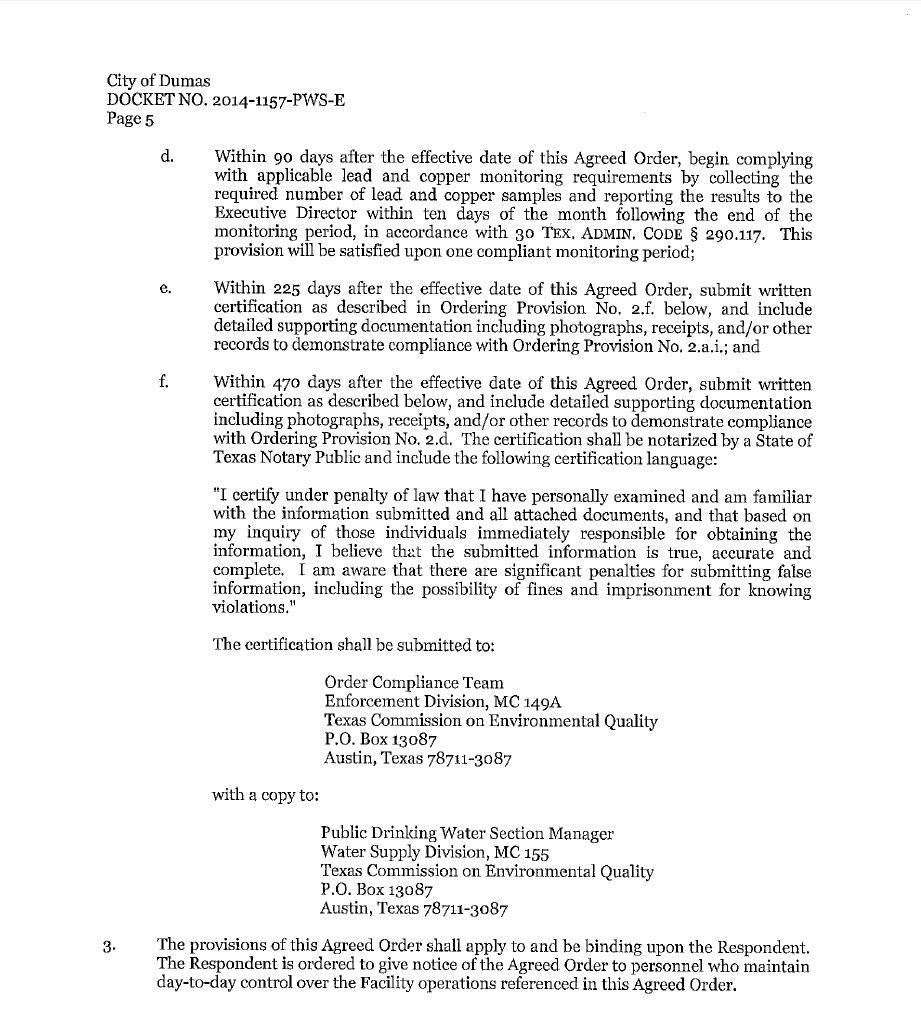 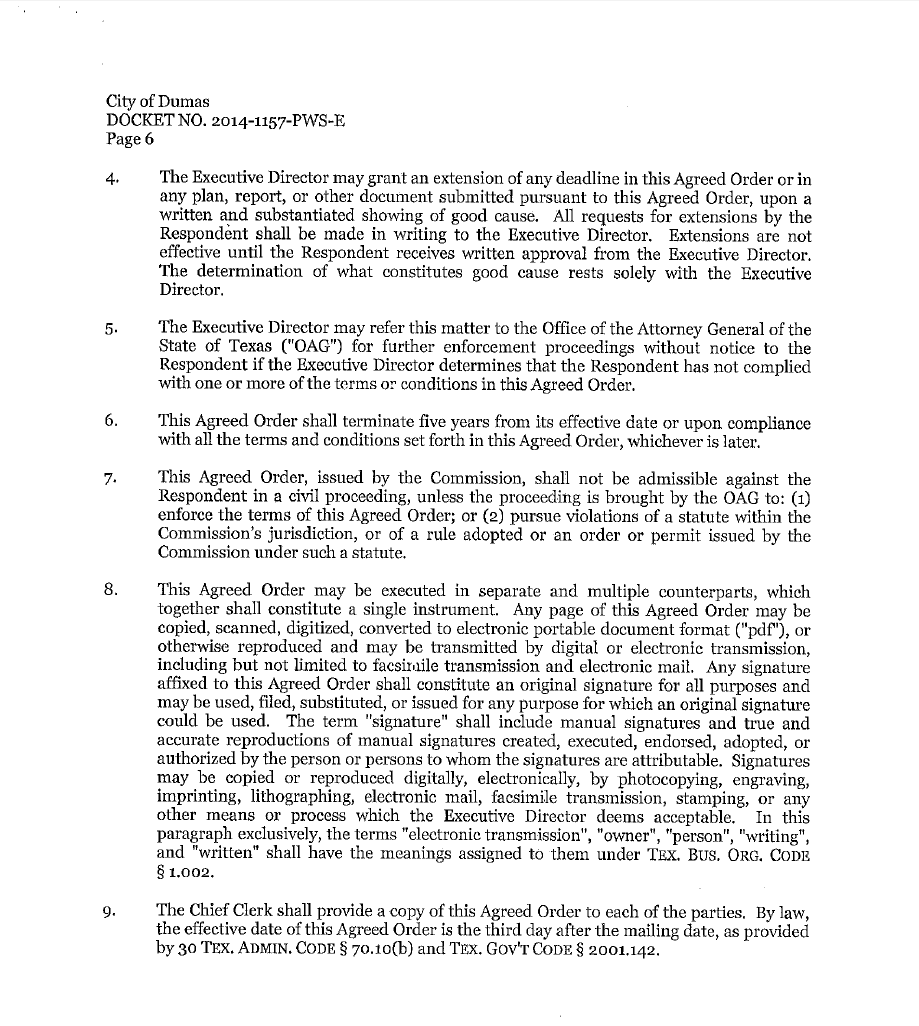 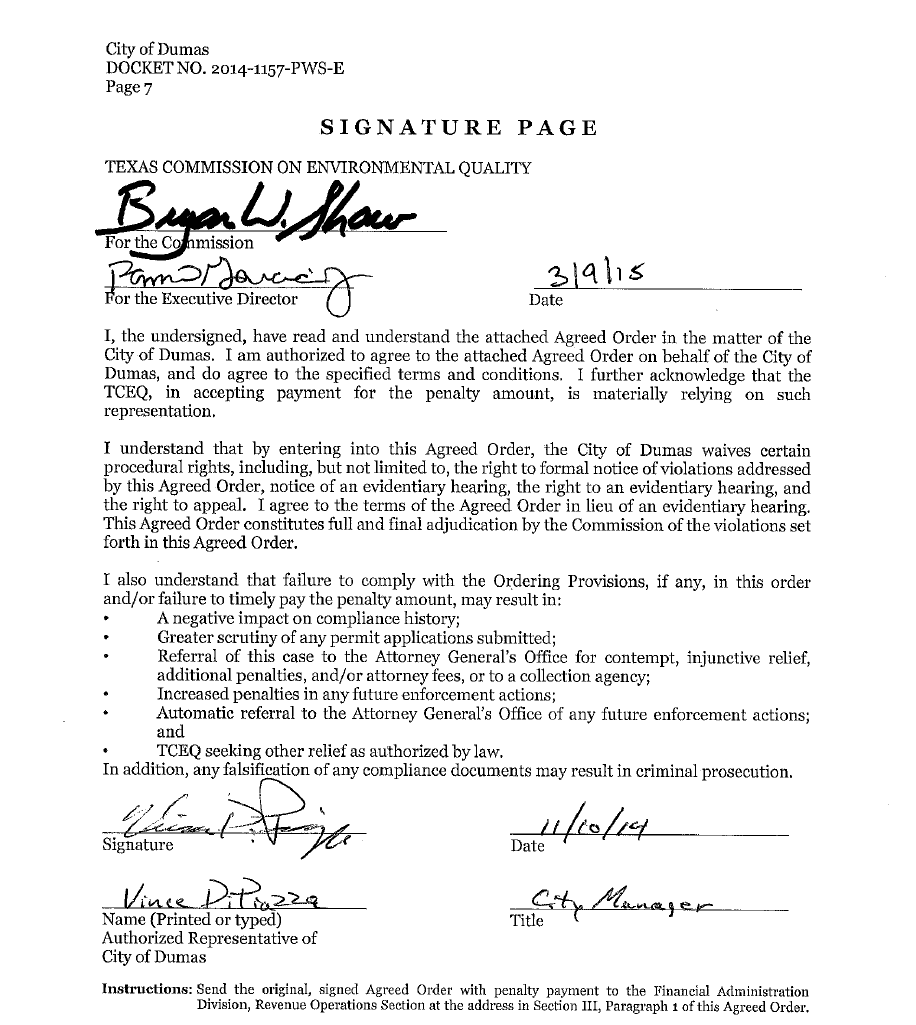 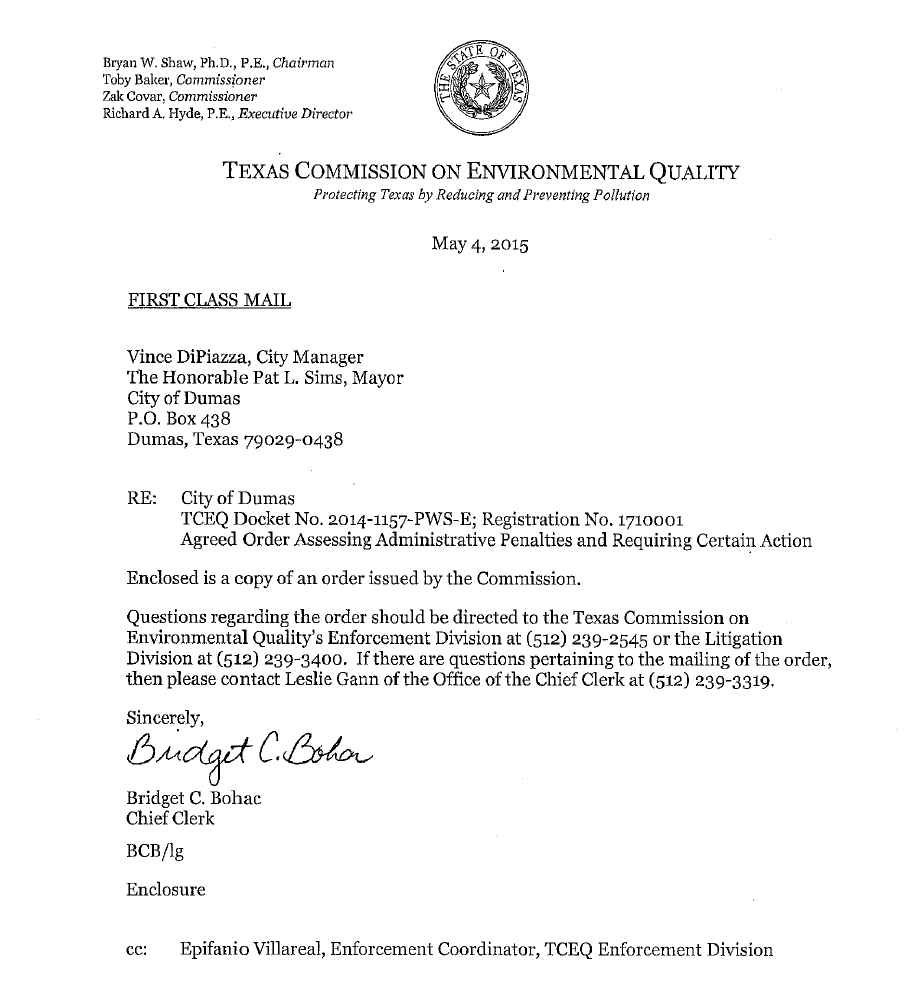