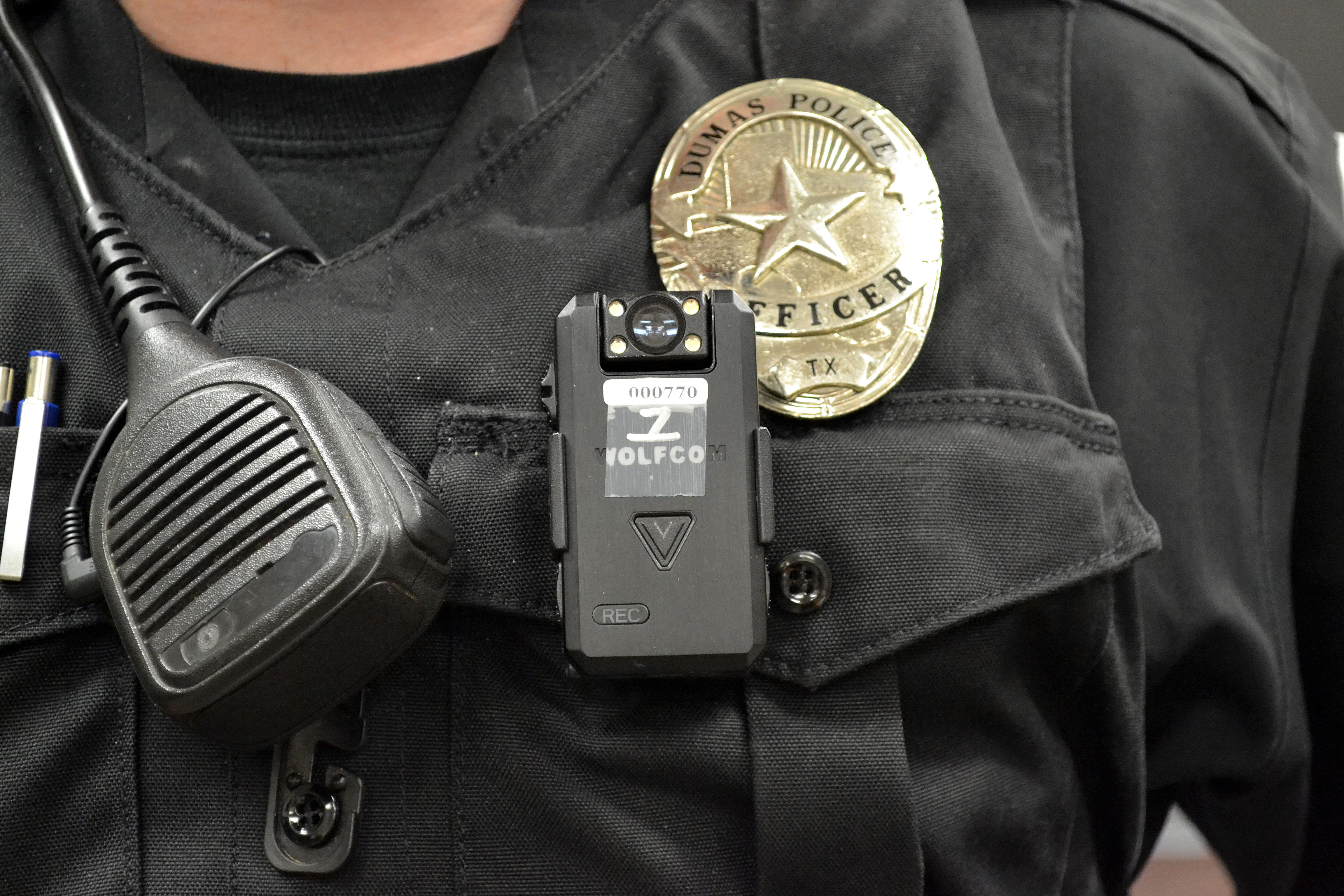 Above: The Dumas Police Department began using body-mounted cameras in January. Police Chief Jim Nelson sees the cameras as one more tool that helps build relationships between the officers and the community they serve.

In 2012, the year before Jim Nelson took the helm as police chief, 13 citizen complaints were filed against the Dumas Police Department, according to DPD records. After each complaint was investigated, officials determined that eight of them had merit and were sustained. A year into Nelson’s administration in 2014, only two complaints were filed against the department. One of them was sustained, and the other was determined to be unfounded.

The drop in complaints amounts to an 84 percent decrease, significant when it’s considered that the department processes up to 14,000 calls for service a year, which include officer-initiated activity. So what changed between 2012 and 2014?

“Accountability,” Nelson said. “So far this year we’ve had only one complaint, and that resulted in termination for off-duty conduct. I credit the drop in complaints to the men and women who work in the department. They’re engaged in the community, and they keep it at the mental forefront that we’re here to serve. We do take that commitment seriously. Everyone is held accountable in this department, and everything we do follows a procedure that establishes a checks and balances.”

This year, Nelson added another tool to his accountability toolbox. The department bought 12 body-mounted cameras, and he issued a thorough policy on their use.

“I have 26 officers, so they’re having to share the cameras,” Nelson said. “Each officer checks out a camera when reporting for duty, and they’ve been trained on how they’re to be used.”

The cameras aren’t on during the entirety of the officers’ shifts. Instead, DPD policy indicates there are seven situations that require the officers to turn on their cameras, including all traffic stops. In addition, the policy requires, “Officers shall not cease recording an event, situation or circumstance until the contact or event is complete or unless authorized by a supervisor.”

The police department began using the cameras in January, and they were bought with seizure funds since the city was already into its fiscal year, and Nelson didn’t want to ask the city commissioners for money to buy the cameras when none was budgeted for them.

The wireless cameras are about the size of a pager, and since they began using them, the officers, even those who weren’t thrilled about having to operate an additional device, say they’re a great tool.

“It has been nothing but a positive,” said DPD Officer Allen Garland. “The cameras actually help me be a better officer. Every three or four days, I go back and review the video from my camera and look to see how I could have done something better. It has been a great learning tool for me.”

And in the months after the Michael Brown shooting in Ferguson, Missouri, when sensitivity about citizen interaction with police officers increased, one Dumas officer said he’s glad to have the body cameras.

“The camera will validate or invalidate any complaint someone might have against an officer,” said DPD Cpl. Clayton Williams. “They show the officer’s perspective. I feel safe from liabilities.”

“You can sit back and review the video step by step,” Fisher said.

But the cameras do something more, Nelson said. Police officers often have to go to work carrying the burdens all people carry from time to time.

“My officers are just like every other person,” Nelson said. “They’re subject to stress, to family problems and everything else a person goes through. The cameras, though, help them push those issues to the back when they’re on duty. When they turn their cameras on, they’re reminded to conduct themselves professionally, regardless of what’s going on in their personal lives, and in a way that will build community relationships. Of course, we’re committed to always being professional, but the cameras serve as a reminder to do that. It’s good to have one more tool that helps us serve the community better.”

The sense of community begins in the DPD offices. Recently Nelson had a cookout at his house, and later in the evening he called one of his officers to his home. The officer collected food from the cookout and took it to the officers working the night shift.

“Sometimes those guys aren’t able to get away to eat,” Nelson said.

The officers say the police chief treats them with respect, and it spills out into the community.

“We know the chief has set a standard for the department to be citizen friendly,” Fisher said. “He’s very active with us, and we know what he expects from us. Nothing is vague, and he’s serious about how we conduct ourselves with the public.”

Fisher recalled a recent incident that demonstrates Nelson’s instructions for his officers to be engaged in the community.

“A young person had set up a lemonade stand, and the chief told us to go over there and buy lemonade,” Fisher said. “So we did. That opened the gate for other people to buy some. Once they saw us doing it, people thought, ‘Well, if the police can buy lemonade, we can, too.’”

Still, Nelson credits his officers with the success in the decline of citizen complaints and being citizen friendly.

“I just planted the seeds,” he said. “They watered them.”