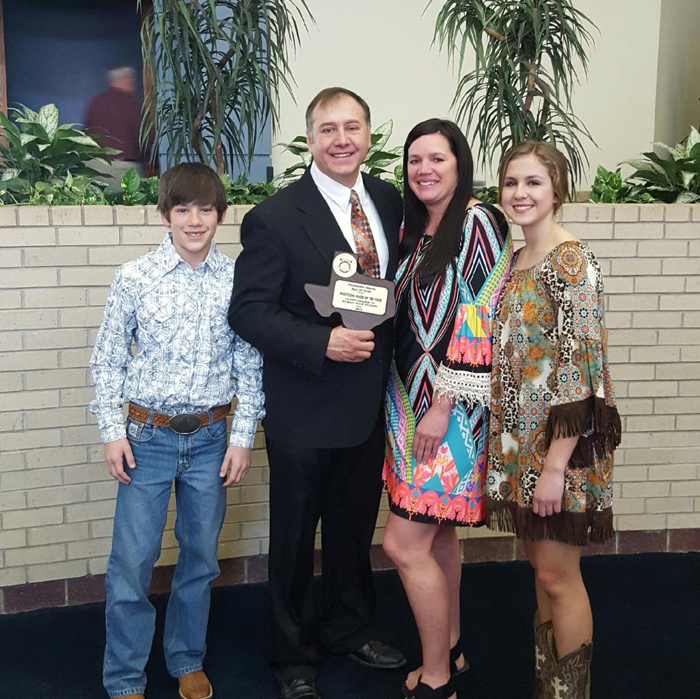 From Friday to Sunday, the Demon wrestlers and their coaches grabbed every medal and award in sight, taking 1st place at Regionals and securing eight spots at State. Loaded with wins, including two wrestlers placing 1st in their weight classes, the Demons dropped two more awards into their bucket: Head Coach Clint Chamblin was named Coach of the Year, and Assistant Coach Antonio Murga was named Assistant Coach of the Year. The momentum continued on to Sunday when the Panhandle Sports Hall of Fame honored Chamblin with Wrestling Coach of the Year.

“It was definitely shocking” Chamblin said of the Hall of Fame award. “I didn’t know it existed until one of the football coaches sent me a text to congratulate me on being Coach of the Year. I sent him a text back and asked, ‘What are you talking about?’”

The accolades reflect the strides Chamblin and his team of wrestlers and coaches, Murga and Chris Holzworth, have made during the three years Chamblin has been in Dumas. In his first year, he had two district champions, and this year he had seven. The Demons hadn’t won a Regional championship since 1998, but they took it in 2015 and this year.

“I’m from an area in Colorado that has traditionally had a lot successes,” Chamblin said. “As a player I was on five different state championship teams, three in wrestling, one in baseball and one in football. I like to think I brought that mentality to Dumas. I asked the team, ‘Why are we settling for district? Why aren’t we expecting to win state?’”

Chamblin said a big factor in the wrestling team’s success is that the football coaching staff changed the environment.

“The combination of our weight training and all the coaching staff coming together has made the difference,” Chamblin said. “There has been a change in attitude and what the athletes expect. I remember when we weren’t in the top 10, and I told the athletes if they would buy into the program, that would be the lowest they would ever finish. We’ve had a lot of successes since then.”

Regionals proved it. The Demons took to the mats Friday with a vengeance, opening with a succession of pins, two of them from Landon Williams (133) and Gilbert Falcon (126) in 0:44. After that, the only thing the other teams saw of the Demons were their taillights.

“Our schedule is tough,” Chamblin said. “We go out of state to wrestle the best, so it’s not a shock when we wrestle the top kids.”

“Our guys aren’t intimidated,” Chamblin said. “They’ve been prepared at some of the big tournaments. They have the mentality that we don’t have to settle for being the best around Dumas. We can be the best in the state.”