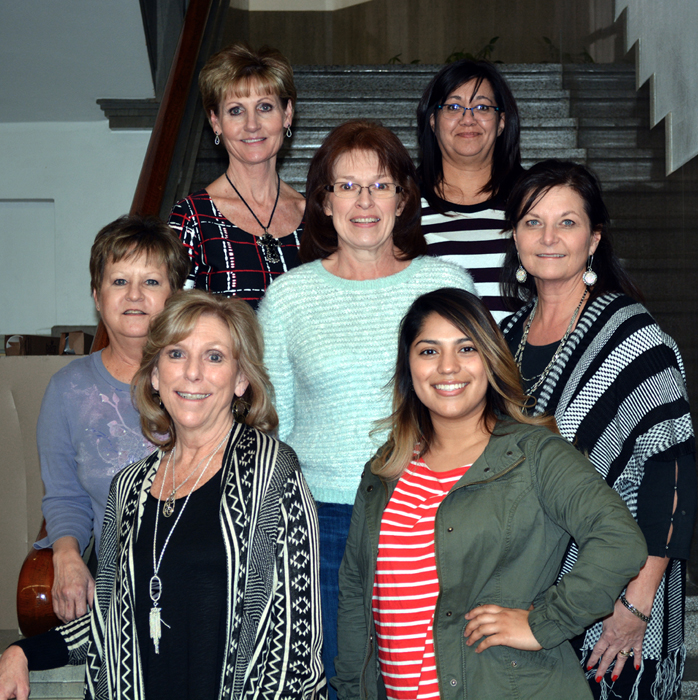 Above: Rhonda Cartrite, bottom left, retired Tuesday after working for Moore County for 31 years. Her grandmother and mother also worked for the county, and Rhonda’s retirement means that for the first time in 65 years, a member of her family won’t be working for the county. Pictured are her co-workers in the county clerk’s office. Top left to right: Moore County Clerk Brenda McKanna and Kay Sneller. Middle row: Cindy Sullivan, Janie Starkey and Teresa Henry. Bottom row: Rhonda and Lisbet Padron.

When Rhonda Holmes Cartrite walked out of the Moore County Courthouse on Tuesday, the closing of the door behind her ended a long chapter in her family’s history. Rhonda retired after working for the county 31 years, and it means that for the first time in 65 years, there won’t be a member of the Holmes family working for the county.

“It’s the end of an era for my family,” Rhonda said. “I retired for some good reasons, but it’s still sad for me.”

Rhonda started her career with the county in 1979, working for the juvenile probation office. She left in 1980 and then returned to juvenile probation in 1986. She transferred to the county clerk’s office in 2004 as the collections manager. In that position she supervised putting alcohol monitors on people, and while that might sound like a job fraught with difficulties, it created opportunities for Rhonda to help people.

“That’s what I’m going to miss the most,” she said. “When someone has a monitor put on, they have to come into the office quite a bit. We form relationships with them because we’re here to help them. Everyone makes mistakes, and if you’re nice to them, most of them will be nice to you, too.”

Rhonda said even after someone is off the program, that person often will return to her office just to visit. The proof appeared after Rhonda’s interview with the Journal ended, and a man came into the courthouse to visit her. Even though he no longer had to wear the monitor, he sometimes returned to see Rhonda and Kay Snellner, her co-worker. One man even sent flowers after the monitor was removed, Rhonda said, to thank her and Kay for helping him.

Kay will move into Rhonda’s position, and both women were emotional when talking about Rhonda’s retirement.

“I’m going to miss her a lot,” Kay said. “We’ve worked so well together to the point where we can read each other. We have a good time, and it’s always been fun working with her.”

Rhonda said retirement will let her spend time with her grandchildren, but it’s still difficult to leave behind a building where she has spent so much of her life since her teenage years.

“Even before I started working for the county, I’d come to the courthouse and help my grandmother,” Rhonda said. “There are many years of memories here. I’m looking forward to retirement and the time it gives me to spend time with my family, but it means saying goodbye to a place where my grandmother and mother worked and spent so much time. That’s a painful thing to do.”