Home NEWS Cactus vaults from scandal-riddled past to a debt-free government, $3.5M cash in... 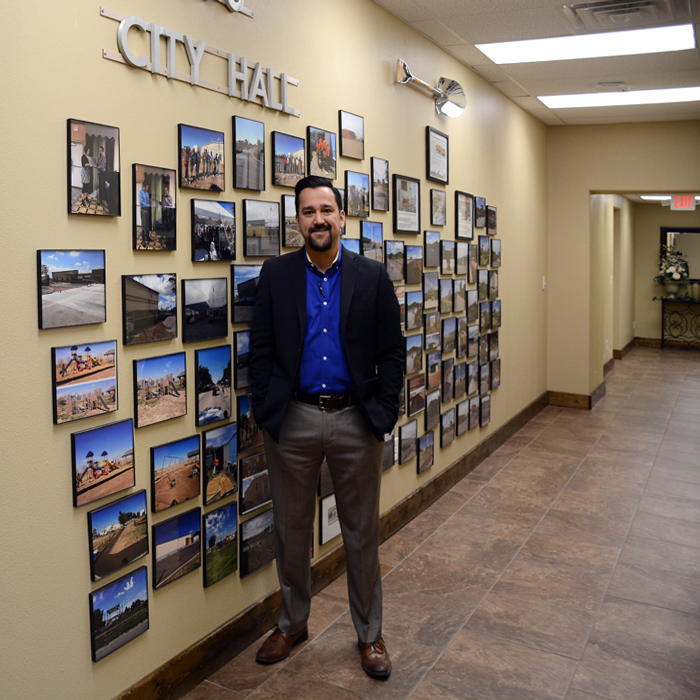 Above: Cactus City Manager Aldo Gallegos stands beside the numerous pictures at City Hall that show Cactus’ growth and transformation.

His five-year contract with the city of Cactus will be up in August, but it’s a safe bet the five city council members and the mayor are offering prayers that City Manager Aldo Gallegos will stay on and continue what has been an amazing transformation of the city.

Gallegos, who grew up in Cactus, took the job on the heels of city scandal, a story line that had plagued Cactus for years. On May 5, 2011, only three months before Gallegos moved into the position, the Amarillo Globe News reported four Cactus police officers quit because of problems with former Police Chief Eloy Ortiz and former City Manager Steve Schmidt-Witcher. On May 10, 2011, KFDA-TV reported Schmidt-Witcher was fired. It was another black eye for Cactus, and the citizens were tired of the drama and the neighboring towns’ perception that Cactus was the wild, wild west.

“We formed a group called Wake Up Cactus to get our town back,” said Juana Longoria. “We addressed all the issues that were preventing Cactus from growing. We were tired of city scandals and the way the city manager was manipulating the council and creating dissension. Wake Up Cactus was instrumental in getting Aldo in and beginning the transformation of Cactus.”

The transformation, five years later, would be the envy of any city. The city of Cactus has a new 4,000-square foot city hall, a new 3,800-square foot police department and a pumper for the fire department. And here’s the kicker. They paid cash for all of it.

“We sell more water than Dumas or Canyon,” Gallegos said. “We restructured the water rates for the local industries, mostly JBS, increasing them to where they should be, and we restructured the city’s finances. Water sales bring in significant income.”

But Cactus’ facelift isn’t restricted to the west side of Highway 287. Across the road, the makeovers include sidewalks and park equipment. The improvements reflect the citizens’ increased pride in the city and the booming morale of the city’s employees, and Gallegos said there are more improvements to come.

The city spent about $550,000 on the police department, $425,000 on city hall and about $300,000 on the pumper, Gallegos said. And the city’s cash reserves? A whopping $3.5 million, exceeding the minimum 60-90 days operating revenue auditors recommend cities have in reserve.

“We’re not financing anything, and that is a huge cost savings,” said Cactus Mayor Socorro Marquez. “Aldo and I are united, and we have a lot of plans for Cactus. The people have grown to trust us, and they now know we’re here to help them.”

Marquez has lived in Cactus for 34 years, and given that Cactus is Gallegos’ hometown, their drive to improve the city and the quality of life for its residents is strong. With the replacement of all of the city’s upper management right before Gallegos was hired as the city manager, the foundation was in place to start almost from scratch.

“The people were tired of not seeing anything change, and nothing was getting done,” Gallegos said. “But the environment has changed drastically. We’re so far behind in updating structures and planning events, but we’ve built the momentum, and we’re running a mile a minute.”

Gallegos led the movement to remodel the recreation center, and Marquez said they’re planning a 30-foot expansion on it. The city also is focusing on other community projects, which he says will strengthen what is already a tight-knit community.”

Gallegos said he wants the city to become a destination, which goes back to planning events. A Fourth of July celebration is in the works, and now that the city’s residents believe they can be heard, they’ve bought into plans to grow Cactus. The city, not burdened with debt as of last year, now has the financial resources and public support to turn the visions established by Gallegos, Marquez and city council members into reality.

“We’re giving Cactus an identity,” Gallegos said. “We’re proud that we’ve come so far in so little time, and there’s so much more to come.”

The new city hall and police department are the evidence of Cactus’ physical and financial growth and an example of what is still to come. It is appropriate that the setting sun illuminates them until the last light of day.

“The people in Cactus have a lot to be proud of,” Gallegos said.