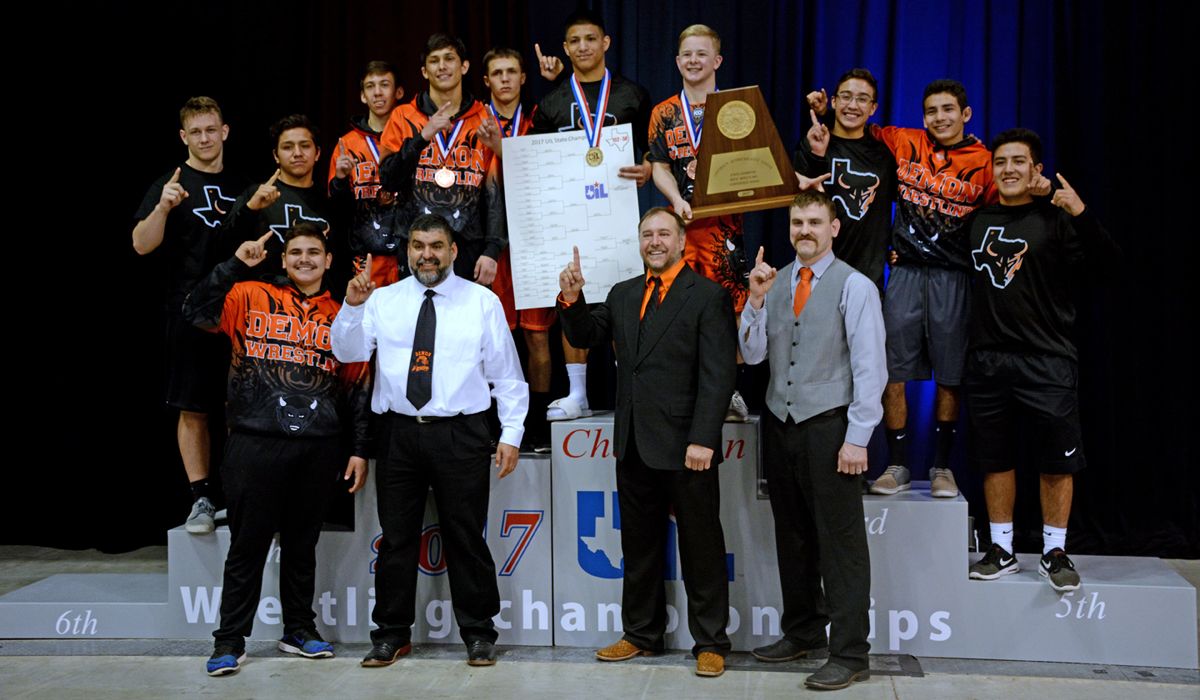 Above: The Dumas Demons won their first state wrestling championship title Saturday with 92 points, one away from second-place Randall at 91. Randall now says they also had 92 points.

Editor’s Note: This story was reporting by the Amarillo Globe News. Click here for the original link.

Could the Panhandle be home to two Class 5A boys wrestling team state champions? That’s a possibility after a whirlwind Sunday in which it was found the Randall boys team seems to have been shorted a team point at the state wrestling tournament this weekend in Cypress.

The University Interscholastic League (UIL) will meet Monday to address the discrepancy in the team points of the Raiders and whether to award them another point and a state title, or to leave things as they currently stand, Canyon ISD acting athletic director David Sutterfield said. When all competitors left the Berry Center Saturday night, Dumas had 92 points and the Raiders 91, the Demons taking home the top state plaque and Randall the second-place award. Randall coach David Quirino went through his team’s points Sunday morning and found an error in his team’s score. Quirino kept coming up with 92.

“Sunday morning (former Tascosa coach) Johnny Cobb called me and said make sure to recount because he had lost a state title due to incorrect math,” Quirino said. “I got 92 every time. So I called the tournament director (Sunday morning) and we went from there.”

Strangely, the discrepancy in points comes from a Randall girls match that took place Friday. After going through all the channels with UIL Sunday, Quirino said the Texas high school governing body found that it had mistakenly deducted a point from the Randall boys score Friday afternoon that was supposed to be deducted from the Randall girls. To make things even stranger, according to Quirino, the point deduction should not have occurred. Quirino protested the point deduction from his girls team score Friday and was found to be correct by the tournament director. UIL could not find a deduction on the Lady Raiders team score to add a point back to, so it took no action. The mistake was not found until Sunday.

“It’s beyond crazy,” Quirino said. The UIL had preliminary conversations about the topic Sunday and will formally meet today morning to make a decision. According to UIL rules, coaches have 30 minutes following a tournament to protest a scoring discrepancy. UIL officials did not respond to requests for comment from the Globe-News Sunday