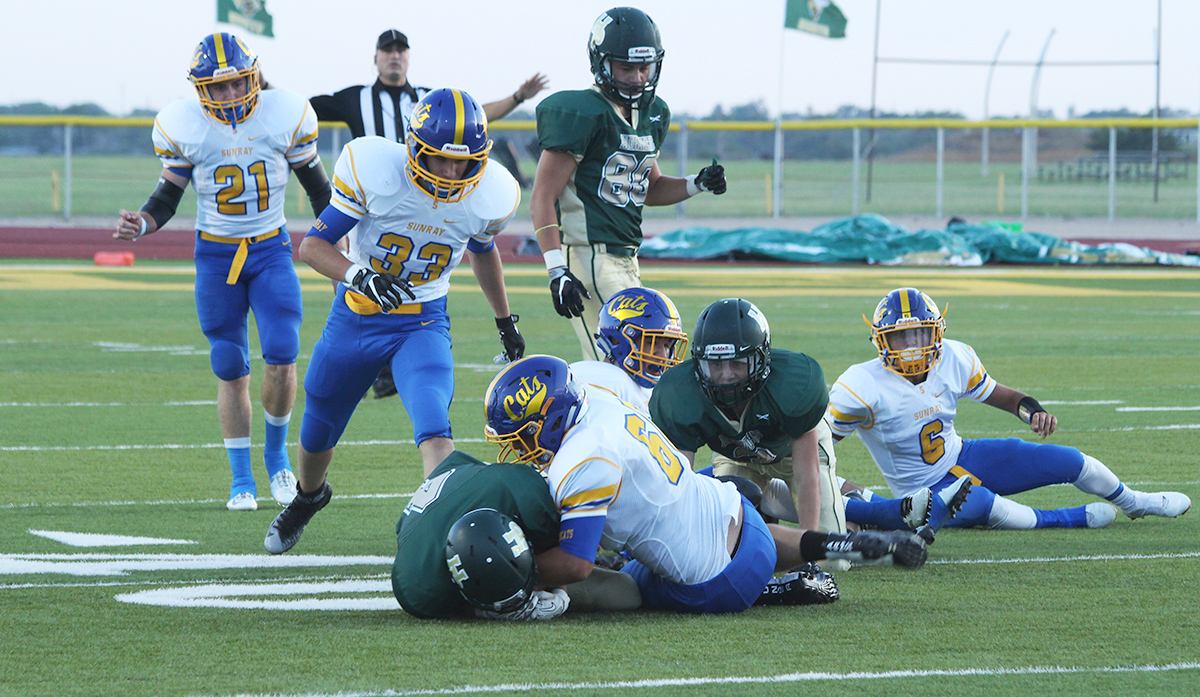 The Sunray Bobcats opened the 2016 season with a 25-6 win over Highland Park on Friday. Both defenses stopped any scoring in the first quarter, but the Bobcats got their offense moving in the second quarter and put 19 points on the scoreboard.

The first score was a pass completion from quarterback Kason Scroggins to Xavier Jiminez that covered 43 yards. The point after kick failed, and the score was 6-0 Sunray. The Bobcats’ defense continued to stop the Hornet offense. On their next possession, Sunray’s Ethan Brotherton broke loose for a 71-yard touchdown run as he raced down the right sideline and outraced the Highland Park defense into the end zone. Luis Cadena added the extra point, and Sunray lead 13-0.

The Bobcats pressured the Hornet quarterback for most of the night, making Highland Park’s passing game ineffective. Luis Cadena intercepted a Hornet pass midway through the second quarter and returned it 44 yards to inside the Hornet 10-yard line. Cadena then scored from 6 yards out on a run play. The point after failed, and the score stood at 19-0 Sunray. With about 3 minutes remaining in the first half, Highland Park, beneficiary of a short Sunray punt, took possession of the football in Sunray territory. A pass interference penalty call against Sunray, deep in Sunray territory, gave Highland Park a first down on the Bobcat 3-yard line. On the next play, the Hornet quarterback ran around the left end into the end zone for the Hornets’ only points of the night. The extra point try failed, and the score stood at Sunray 19, Highland Park 6.

Throughout the third quarter, the Sunray defense continued to frustrate the Highland Park offense. After receiving a punt midway through the third quarter, Sunray put together a drive that resulted in Brotherton scoring from a yard out to bring the score to 25-6. The point after try failed, and the teams traded punts until the game was stopped due to lightning in the area.

Sunray will host Gruver on Friday at Bobcat Stadium. It will be homecoming for the Bobcats. This year’s homecoming court will be introduced at halftime, and the new homecoming queen will be announced.