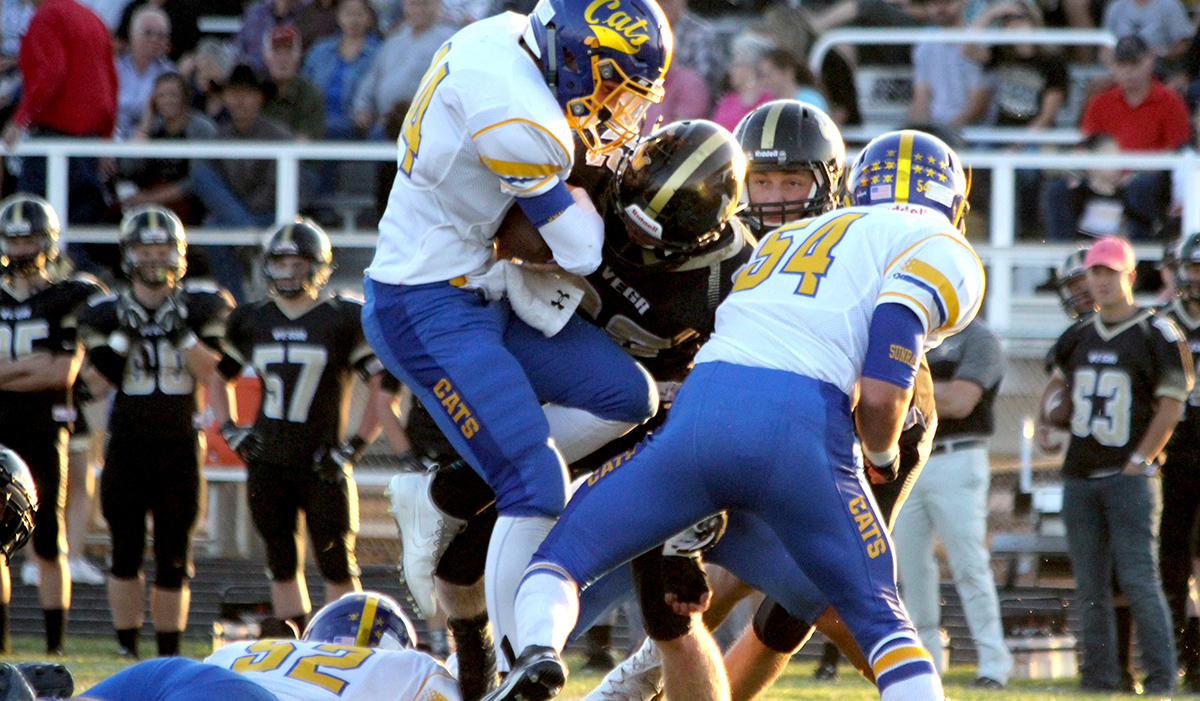 Above: Photo by Angaleta Crenshaw

Sunray used up most of the first quarter with a 12-play drive, culminating with Luis Cadena kicking a 19-yard field goal to give Sunray a 3-0 lead. The Bobcat defense held Vega scoreless in the first quarter. Vega put together a 9-play drive midway through the second quarter, with Cody Brown scoring on a 1-yard dive. The point after try failed, and Vega took the lead  6-3.

Sunray drove to the Vega 9-yard line later in the quarter, consuming 10 plays but turned the ball over on downs. After a Sunray punt, Vega drove 64 yards in nine plays, and Conner Hartsell booted a 19-yard field goal with 12 seconds left in the second quarter. This put Vega ahead 9-3, ending the first half.

Sunray’s first three drives of the second half ended with an interception, a lost fumble and a punt. The lost fumble occurred at the Sunray 19-yard line. Vega quarterback Tyler Long covered the 19 yards in one play. Hartsell added the point after try and Vega led 16-3. Sunray never quit and went 38 yards in five plays for a touchdown. Xavier Jiminez hauled in an 18-yard pass from Kason Scroggins to record the score.

Sunray decided to go for the two-point conversion, but Ethan Brotherton was tackled in the Bobcat back field, and the conversion failed. Early in the fourth quarter, Sunray drove 80 yards in six plays to score again. Brotherton ran the ball in from 15 yards out for the score. Rhett Rouser found Jiminez open in the right flat to complete a two-point conversion, giving Sunray a 17-16 lead. Sunray’s defense then stopped Vega’s offense, forcing a punt. The Bobcats were able to keep the ball away from Vega and used up the final 5:38 of the clock to take the win.

Sunray has an open date Friday, and will go to Stratford in two weeks to open district play.