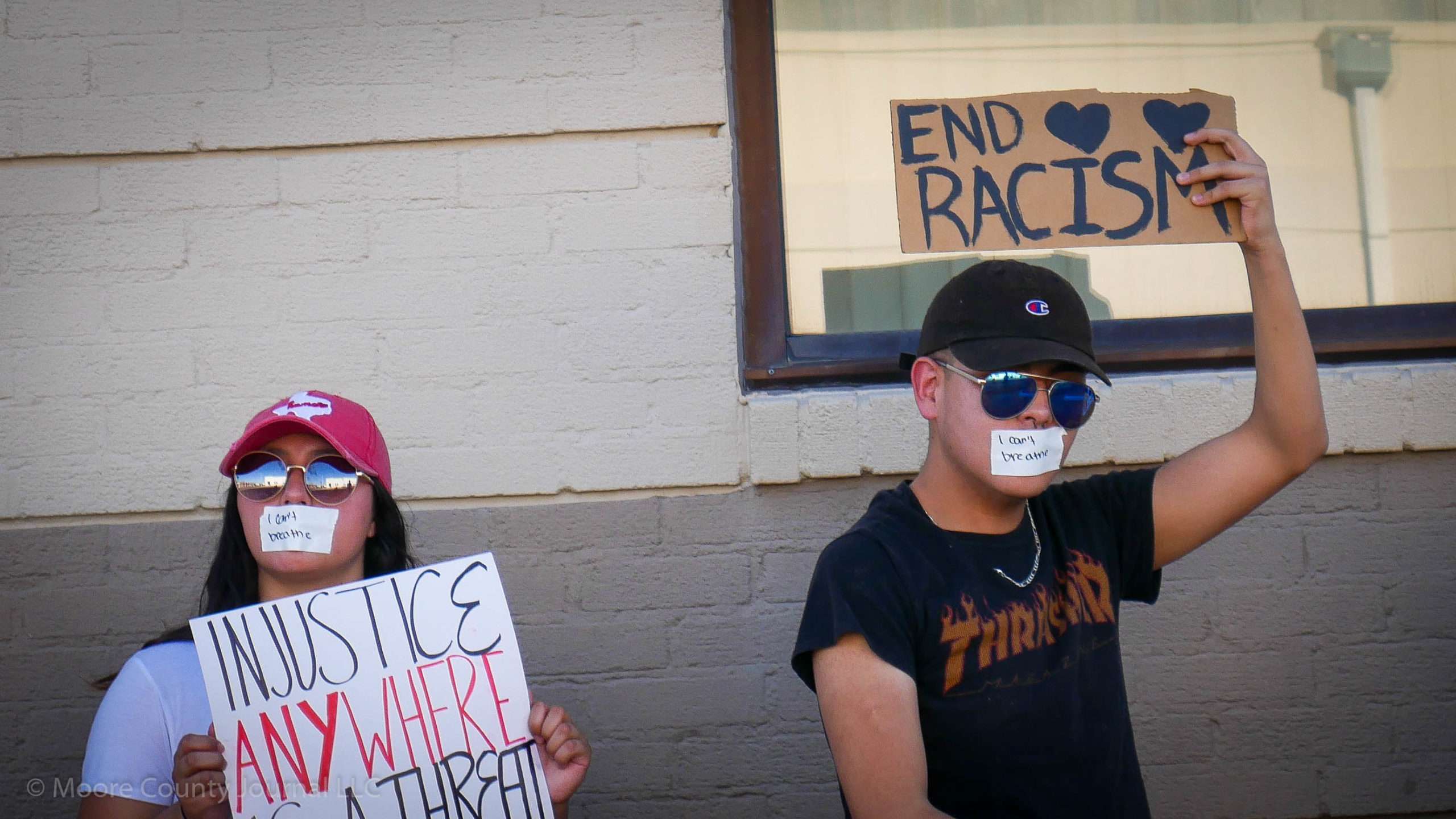 A group of young protestors gathered in McDade Park on Monday evening in response to the recent death of George Floyd in Minneapolis, Minnesota. Floyd died while in police custody on May 25th after Office Derek Chauvin knelt on his neck for almost nine minutes while Floyd repeatedly said “I can’t breathe”. Eye witness video spread on social media and sparked mass protests and riots around the world. The officers involved in the death have since been arrested and charged.

The Black Lives Matter rally was led by Monica Blakemore from Borger and those attending were mostly local youth of all ethnicities. Dumas Police escorted the group as they marched down Maddox Avenue and then west on 7th Street to the Dumas Police Department at 124 E 7th Street.

Protestors gathered on the East side of the police department building where rally leaders took turns praying and speaking to the group. At one point the group knelt down on one knee for nine minutes symbolizing the time that Derek Chauvin knelt on Floyd’s neck while other officers stood by watching.

Several Dumas Police officers watched the event which was originally scheduled to happen on Friday, June 5th but was rescheduled due to rumors that armed groups were planning on attending and potentially threatening rally participants. Several other rumors spread around town about the event on Friday including claims that groups of “outsiders” were being bused into town and that a “biker gang” was also planning on attending. These rumors were fueled by scenes of protests across the country that turned violent and in some cities has led to the destruction of businesses and personal property. None of those rumors ever proved to be true and rally’s held in area cities have been mostly peaceful.

After the event was over Monica Blakemore, the event organizer, spoke with the Moore County Journal and said: “over the years I have seen the injustice and enough is enough…we need to come together and unite and spread the word of love and say enough is enough…we’ve got to go about making changes and doing it right.” She encouraged those at the event to register to vote and become active in the community to make sure tragedies like George Floyd didn’t take place in our communities saying “I know Dumas has a lot of heart and I’ve seen it, it’s beautiful here”.

The event was peaceful and rally leaders said they appreciated the Dumas Police working with them to ensure the safety of everyone involved.

Hearts full of kindness and acceptance mean two boys will have...