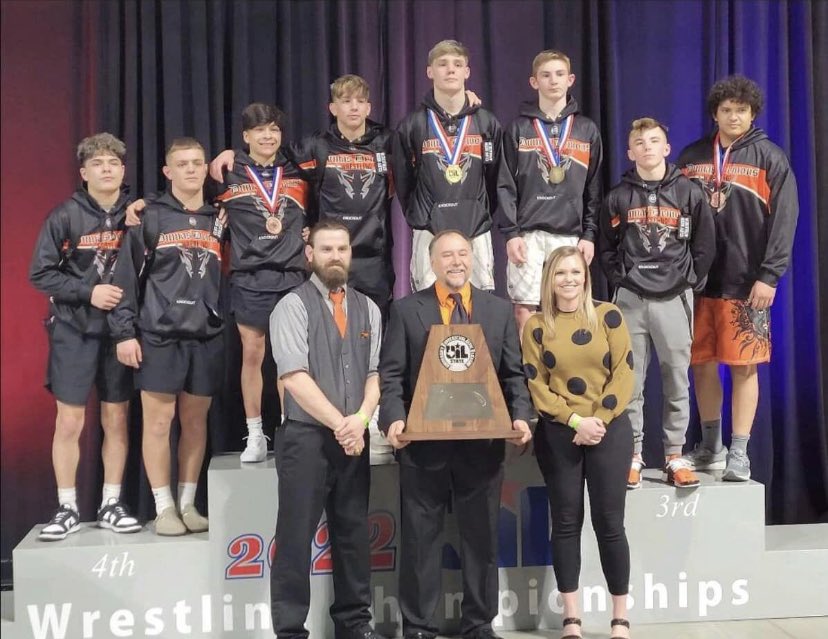 Baxter claimed the top spot at 145 pounds with four pinfalls. The junior defeated Tyler Pomeroy of Huntsville in 2:27 to open the tournament before advancing to the semifinals with a 55-second win over Midlothian Heritage’s Anthony Schmidt. A win against Isaiah Hunter of Lovejoy in 1:49 propelled Baxter to the championship where he pinned Rock Hill’s Xavier Jukes in 3:44 to win the state title.

Bogner went 4-0 to claim the championship at 113 pounds with a 7-3 decision against Grapevine’s Gabe Aldaco. The freshman pinned Husbaldo Salazar of Mission Sharyland before notching decisions over Burleson Centennial’s Xavier Rodela and Larry Layman of Northwest to reach the title match.

Guillen registered a trio of pinfalls to reach the 95-pound division championship. The freshman sensation lost by a 7-3 decision to Sydney Perez of A&M Consolidated in the gold medal match, and ended the season with an impressive 46-7 mark.

Loya topped Maya Khabbaz of Pflugerville Weiss in the fifth-place matchup by a 7-3 decision to finish the season with a 50-7 record.

Magallanes garnered a 3-2 decision over Aidan Rodriguez of Corpus Christi Veterans Memorial in the fifth-place match to improve his season card to 29-12.

Garbalena was pinned by Corpus Christi King’s Jacob Cates in 2:50 in the fifth-place match and finished the season with a 40-12 record.