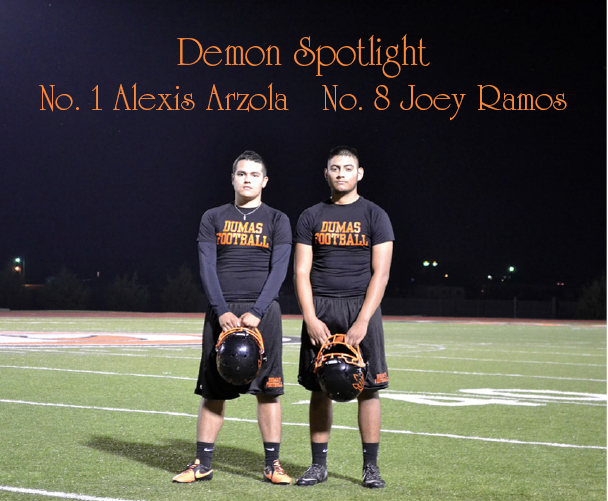 Above: No. 1 Alexis Arzola, left, and No. 8 Joey Ramos, both seniors, say they’ve been preparing for this year’s winning season for two years.

The Moore County Journal will spotlight Demon players each week.

When No. 1 Alexis Arzola kicked a 38-yard field goal and pushed the Demons three points ahead of Plainview from a 14-14 tie two weeks ago, it energized a defense that took the field and stopped the Bulldogs from scoring in the last minutes of the game. Regardless of a couple of missteps, the Demons handed Plainview a 17-14 loss, and 5-0 Dumas became the only 3-5A school that went unbeaten in predistrict play.

No. 8 Joey Ramos is a 1,000-yard passer, and his 77-127-4 record puts him in the top tier in the district. Working with an offense that continues to hone its timing, Ramos’ accuracy is crucial, and the offense and defense have tag-teamed their opponents into submission this season.

Both players expect to do the same Friday during their game against the Canyon Eagles at Demon Stadium. Both young men said the results on the field come from never slacking, not in the weight room or anywhere else. Both are seniors, and they said this season and a district championship is something they’ve been looking forward to since they were freshman.

“I’ve never wanted anything as bad as I want this,” Ramos said.

Arzola’s words are a message to Canyon.

“We’re going to fight, and we have the confidence of winners,” Arzola said. “We’ve been working on this for a long time, and our strong sense of brotherhood on the team is showing. We know what we can do.”

Both players credit their coaches for their confidence and skills, and Ramos said the coaches give them their all.

“We’re where we are because of them,” Ramos said. “They’ve worked with us and taught us there are no excuses for skipping practice or reps. They’ve taught us to want this title, and they prepared us to fight for it.”

And they’ve been fighting. The Demons will have to knock Canyon and defending champion Randall out of the running, but they’ve been showing what they’re made of during their 5-0 season. Dumas hasn’t had this kind of predistrict record in 18 years, but this year’s team isn’t shaking from the pressure.

“We’re prepared for this,” Arzola said. “We know there’s pressure, and we don’t want to let anyone down. The game against Canyon has been on our minds since Plainview, and all I can say to Canyon is you better be ready for a fight.”