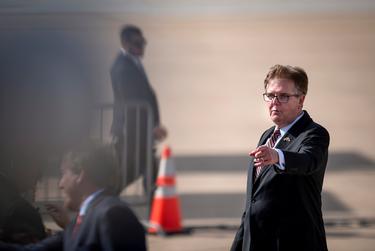 Dan Patrick said once again this week that he’s not going to run against Greg Abbott for governor. He was most emphatic.

Maybe we’ve all been looking at this wrong. Patrick doesn’t have to run against the governor, unless he wants the bigger paycheck. Abbott might be his superior on paper, but Patrick has been the stronger leader since the freeze last month.

On a playground, they’d call this a whupping.

That doesn’t mean it’s good government — just that Patrick has been successful in flushing Abbott’s people out of their utility regulation jobs, clearing the way for a set of replacements who will owe as much allegiance to him as they owe the governor.

That gives the Senate — and its presiding officer — veto power over the appointments.

It’s unusual to bust someone with a vote. The governor’s aides generally check around before an appointment is announced, to avoid a public spectacle if there are serious objections. It’s a quiet and relatively efficient process that doesn’t get much attention.

But the Public Utility Commission appointments are already a public spectacle, what with the attention on regulators after February’s power outages during a hard freeze that killed at least 57 Texans.

Blaming regulators takes attention off of the legislators who designed the regulatory setup that failed so miserably last month. And it takes the spotlight off of lawmakers who, after a 2011 freeze led to similar blackouts, voted for legislation that recommended that companies prepare the state’s energy grid for winter weather without requiring them to do so — a weatherizing idea that is under consideration again today.

That group of lawmakers includes the lieutenant governor, who was a senator at the time, along with 20 of the Senate’s 31 current members, who voted in favor of the legislation either as senators or as House members.

They’ll all have a stake in what happens next, from confirmations of new PUC appointees to proposed protections against widespread, life-threatening power losses during severe weather. Some of those, like fortifying electric generation, transmission and distribution against bad weather — along with the facilities that provide natural gas and other fuels — are going to be expensive, either for taxpayers, ratepayers or both.

The appointees are pawns in that larger legislative scrum, a lever at the Senate’s disposal if other negotiations bog down. And Patrick’s moves in the last several weeks have strengthened the Senate’s bargaining position.

He called for the heads of the three Public Utility Commissioners and of the CEO of the Electric Reliability Council of Texas, or ERCOT — the operator of the electric grid in Texas. Three are gone, and the last, Arthur D’Andrea, has resigned pending the appointment of his successor. Of all of the issues before lawmakers this year — a list that includes a pandemic, economic trouble, a budget that has veered from shortfall to windfall with a huge influx of federal money, police reform, racial justice, immigration, elections and voting laws — utility regulation and wholesale pricing is the one that’s getting the full public attention of the state Senate’s leader.

He has 28 senators’ support on this one — all but two of the Republicans and one of the Democrats.

They still have to persuade the House to go along, and Patrick is short of leverage in that department. But with a utility fiasco centered in the executive branch of state government and a successful extermination of the regulators involved, Patrick has the governor under his thumb.

That might be Patrick’s best argument for staying right where he is.