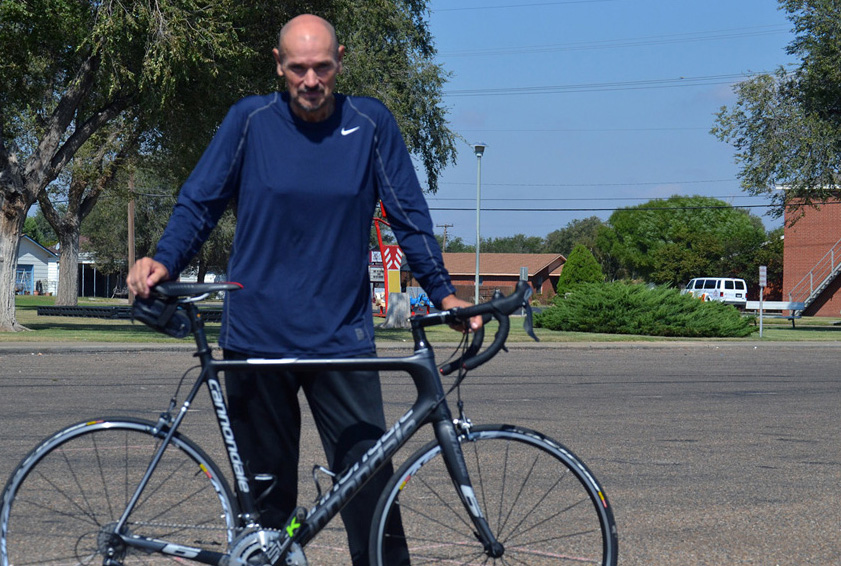 Above: Ron Smith of Amarillo finished the 67-mile course of the Texas Tumbleweed 100 first on Saturday. He hadn’t ridden in 17 years, during which he gained and lost 185 pounds.

For Ron Smith of Amarillo, getting back in shape literally was like riding a bike. After a 17-year hiatus from bike riding, during which he gained 185 pounds and then lost it, he was the first rider to finish the 67-mile course Saturday in the Texas Tumbleweed 100, a testament to his will to get back in shape and back into bike riding.

Seventeen years ago, Smith regularly rode in some of the area’s most famous bike rides. He rode in Wichita Falls’ brutal Hotter’N Hell ride seven times and the Enchanted Circle Century Tour eight times, but then he stopped and dedicated his time to supporting his son’s sports commitments.

“And I gained weight to the point where I couldn’t even walk around the block,” Smith said. “I had to make a decision to live or die.”

So Smith got his old bike out and took it in to have it repaired, only to find that not only had he gotten out of shape, so had his bike.

“I found out it was so out of date, and I would have to buy a new one,” he said.

On Saturday, Smith was ahead of his closest rider by about 30 minutes — and he rode the last several miles on a flat tire.

“I didn’t hear metal on pavement, so I figured I was alright, but when I finished the ride, I saw that the back tire was pretty flat,” he said.

The Texas Tumbleweed 100 is a fundraiser for the Dumas YMCA, and it drew 95 riders from five states. Riders could choose to ride in the 12-mile, 35-mile, 67-mile and the 100-mile categories. In its third year, the ride has grown from 54 riders the first year, and the Moore County Hospital District, and the Dumas Independent School District each had teams comprised of their employees in the ride.

Smith, riding on his own, 185 pounds slimmer, is feeling good these days, back into staying in shape and riding. Last week, he finished a 57-mile ride, but Saturday’s ride was the longest since he has gotten back in shape.

“But I have to tell you, this ride is much harder than the Hotter’N Hell,” Smith said. “They should think about changing the name from Texas Tumbleweed to something that reflects the difficulty of the course. It’s brutal.”

After his 67-mile ride Saturday, riding on a flat tire and still finishing first, Smith’s day wasn’t over.

“I’m going home to paint the house,” he said.