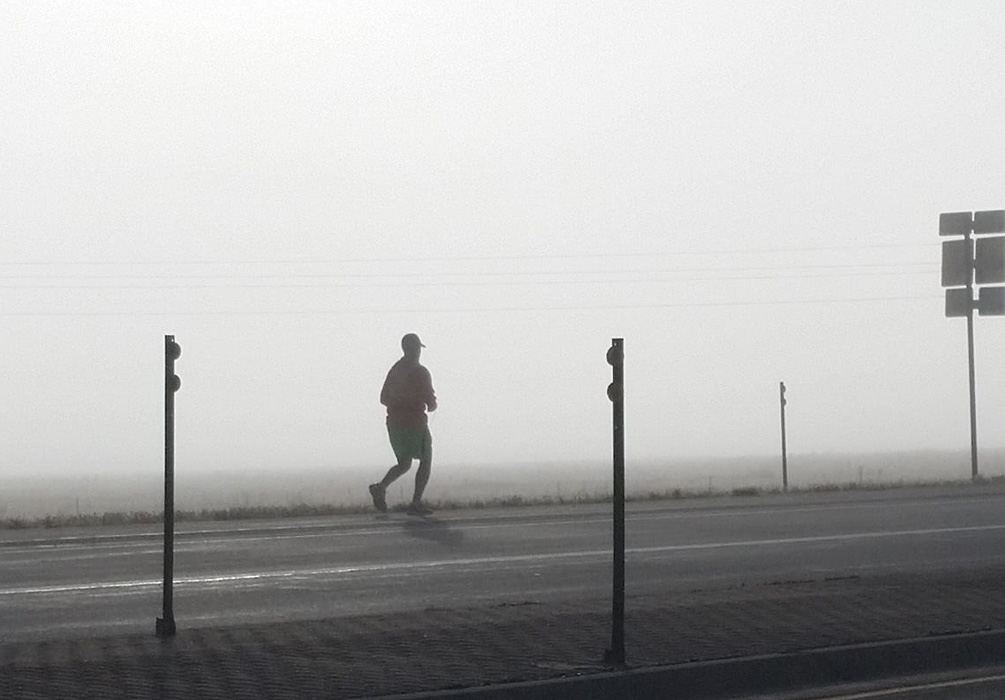 Above: Troy Drasher runs on the highway during his 720-mile trek from Colorado to Texas to raise awareness for wounded warriors. (Courtesy Photo)

Troy Drasher might look like he’s running alone on the side of the highway, but he’s not. With each step of the 720 miles he plans to run from Aurora, Colorado, to Abilene, Texas, hundreds, if not thousands, of wounded warriors are running with him in spirit: He’s running for them. As he approached Dumas, running south on U.S. Highway 287, those warriors were on his mind, and that pushed him on.

Drasher calls the run an “ultra marathon”, and he’s doing it to raise awareness for wounded warriors. He teamed up with the Wounded Warrior Project, and all the donations he raises through his run go to that organization; the expenses he incurs are on him. So far, people have donated $7,100, he said, and he’s only halfway through the course.

After leaving Stratford, Drasher arrived in Dumas early Tuesday afternoon, and he was met with something of a fanfare. Law enforcement officials, who knew he was coming, provided an escort through the city until he got to the Hampton Inn, where the owner, Pritesh Bhakta, offered him a room on the house.

“From southeastern Colorado to Dumas, the police and sheriff’s departments have met me and escorted me through town to make the road safe,” Drasher said. “One town radios the next, and that has raised so much awareness for the wounded warriors.”

Drasher’s Facebook page has grown because of the attention the escorts bring him. He said his Facebook followers have grown from 1,000 to 36,000.

So where did he get the idea to run through three states? He said it came to him about 15 months ago when he was reflecting on his career in the Air Force.

“I was thinking, ‘What’s the one thing I’ve done that I’m going to hang my hat on?’” he said. “I decided to take all my passions and put them together. I love the warrior, God, country and my family.”

Dasher runs to “defrag” at the end of the workday, jumping on the treadmill or running marathons. Still, even with that history, it would be nothing like running 720 miles.

“Before I told anyone about my plans to do the run, I wanted to make sure I could handle it,” he said. “I’m 42 years old. After I decided I wanted to do it, I ran marathons and tested myself over the year, and then I thought, ‘I’m ready for this.’”

Drasher contacted the Wounded Warrior Project with his idea, and although his proposal wasn’t the kind the organization usually receives, he said they loved it and set up a donation page for him on their website. He named it Operation 720 for the number of miles he would run. He began in Aurora where he’s stationed at Buckley Air Force Base and will finish in Abilene where his wife and children live. When Drasher was transferred to Colorado, his family stayed in Abilene, where he was stationed for 18 years.

“Abilene is all my kids have known, so I didn’t want to uproot them,” he said. “I’ve been deployed six times, and we were separated then. We can handle this separation, too.”

Drasher’s day begins about 3:50 a.m., and he runs about 26 miles a day. His mother follows him in a chase car, and his dad pulls a fifth-wheel they use when not staying in a hotel. The challenge is worth it, he said.

“If people don’t donate to the Wounded Warrior Project, that’s OK,” he said.

According to the Wounded Warrior Project website, 52,369 military men and women have been wounded since 2003, 400,000 suffer from PTSD, and 320,000 have traumatic brain injuries. Drasher is aware of those numbers.

“I’m just happy to raise awareness for them,” he said.

Drasher will have three days to spend with his family before he has to return to Colorado, a return trip that will go a lot faster than his run to Abilene.

“I’m going to drive my truck back,” he said.

Anyone who wants to support Drasher’s run can click on this link.