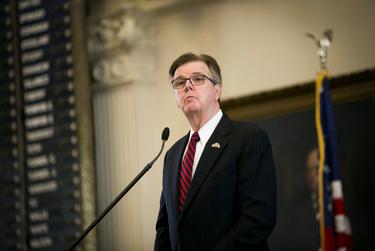 Lt. Gov. Dan Patrick on Thursday pleaded for Gov. Greg Abbott to take executive action on reversing billions of dollars in charges for wholesale electricity during last month’s deadly winter storm after the Texas House adjourned for the week without taking up the issue.

“The governor of Texas is a very powerful person,” Patrick said at a Capitol news conference, ramping up his dayslong campaign to get Abbott to intervene. “He can do anything he wants.”

After the Senate moved at a breakneck pace Monday to pass Senate Bill 2142, electricity repricing legislation prompted by the storm, the House indicated that it would not take action on the proposal. The lower chamber instead stressed it planned to take a more deliberative approach. And, while the bill was referred to a House committee Thursday morning, the House gaveled out until Monday afternoon.

The bill would have forced the state’s energy grid operator, the Electric Reliability Council of Texas, to reverse roughly $4.2 billion in charges after an independent market monitor found ERCOT artificially inflated prices and overbilled energy companies by $16 billion. And included in the legislation was a March 20 deadline for the Public Utility Commission, which oversees ERCOT, to take action to reverse such charges.

Patrick on Thursday said Abbott could, using his emergency powers, order the commission to tell ERCOT to either correct the charges or that such charges were under investigation, which the lieutenant governor said would extend the deadline.

“The House said they wanted more time — that would give them more time,” Patrick said.

Patrick told reporters he met “at length” Thursday with House Speaker Dade Phelan, R-Beaumont, and they had a “good discussion.” Referring to House members, Patrick said he thought the Senate was “able to get there faster than they were” — passing an electricity repricing bill — “because we can move quickly” by suspending the rules in the Senate.

After the Senate passed the repricing legislation, Phelan had expressed skepticism toward reversing such charges, saying in a statement that doing so “based on disagreement with PUC and ERCOT’s management decisions is an extraordinary government intervention into the free market.” Phelan also said there had been “no error” in the operator’s pricing, contrasting himself with Patrick, who has repeatedly referred to those billions of dollars in charges as a mistake.

Despite Patrick’s pleas, Abbott had still not clearly taken sides in the debate as of Thursday afternoon, and a spokesperson for the governor did not immediately respond to a request for comment. Asked Wednesday whether he agreed with the House or Senate’s approach to electricity repricing, Abbott said he had “already made multiple comments about that.”

It was not entirely clear which prior comments Abbott was referring to, but on Monday, as the Senate was preparing to rush through SB 2142, Abbott seemed to urge a more deliberative approach.

The winter weather last month caused failures in every type of power source, creating an electricity crisis during which nearly 4.5 million Texas homes and businesses were without power. For days, ERCOT charged the maximum amount allowed for wholesale electricity — $9,000 per megawatt-hour — in order to incentivize generators to send power to the grid.

It’s still not clear how much the current billing dispute will impact average Texans. At least some of the additional costs incurred by retail electric providers would likely be passed on to customers through rate increases. But the impact varies by company — and those that sent power to the grid while rates were inflated stand to lose money if ERCOT reprices.

Abbott said the Legislature needed to investigate the issue and “weed through all these complexities,” specifically whether repricing was in conflict with two sections of the Texas Constitution.

On Wednesday, though, Attorney General Ken Paxton issued an opinion that said the PUC has “complete authority” to reprice and downplayed the same exact constitutional issues that Abbott brought up.

“A court would likely find that such corrective action by the Public Utility Commission” would not conflict with the state constitution “provided that such regulatory action furthers a compelling public interest,” Paxton wrote in the nonbinding opinion, which Patrick requested two days earlier.

Patrick also scored a win Tuesday night, when Abbott announced the resignation of Arthur D’Andrea, who had recently been tapped by the governor to serve as chair of the commission. The governor said he had asked for D’Andrea’s resignation, which is effective upon the appointment of a successor. Abbott said he would name D’Andrea’s replacement “in the coming days” — an appointment that, if made during the 2021 legislative session, will need to be confirmed by the Patrick-led Senate.

Abbott, whose office had defended D’Andrea on Friday, did not provide a reason for why he had requested D’Andrea’s resignation. But the news came hours after Texas Monthly published a story Tuesday saying D’Andrea had told out-of-state investors on a call he would work to throw “the weight of the commission” behind stopping calls for repricing.

At a news conference in Dallas the next day, Abbott did not offer much new detail when asked why he had wanted D’Andrea to step down.

“We want to make sure that we are going to show the vision to our fellow Texans that we are charting a new and fresh course for the Public Utility Commission, and the action that I made is one of many steps that will be taken to achieve those goals,” Abbott said.

Disclosure: Texas Monthly has been a financial supporter of The Texas Tribune, a nonprofit, nonpartisan news organization that is funded in part by donations from members, foundations and corporate sponsors. Financial supporters play no role in the Tribune’s journalism. Find a complete list of them here.