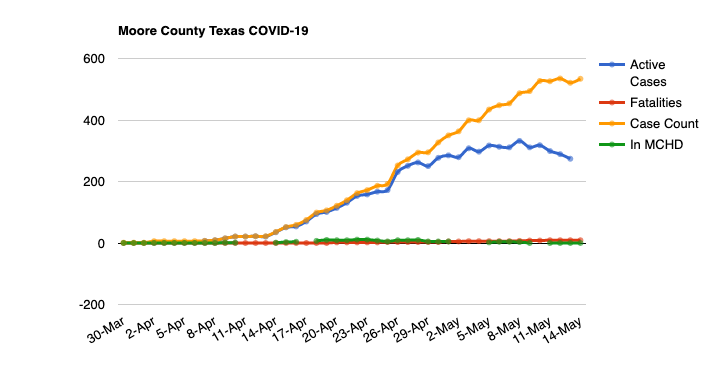 Newly available data from the Texas Department of State Health Services (DSHS) is giving us a better view of COVID-19 activity in Moore County. The data shows active cases went from zero to a peak of 332 in around 6 weeks time. The first case was on March 30th and by May 8th the total active case count had risen to an all-time high of 332.

Since May 8th the active case count has dropped around 17% to 274 active cases reported on May 13th. The interactive chart below shows the latest data available from DSHS and also includes some data released by the Moore County Hospital District (MCHD).

City of Amarillo Public Health Director Casie Stoughton said on Wednesday during a press conference that 110 (5.7%) of Amarillo area cases were from the JBS plant in Cactus. Positive COVID-19 cases are tracked based on where a person lives. JBS shuttles workers who live in Amarillo to and from Cactus each day. As of May 14th, the Amarillo area, which includes Potter and Randall Counties, reported a total of 1,939 cases.

MCHD released their latest data on Thursday and said DSHS had “adjusted the overall positives number to remove some individuals who were mistakenly included in the Moore County count.”

The total overall number of Moore County cases are expected to rise again as DSHS begins testing all Cactus JBS employees in the coming weeks. Details of how and when employees will be tested have not been released by DSHS. The Cactus plant employs around 3000 people.