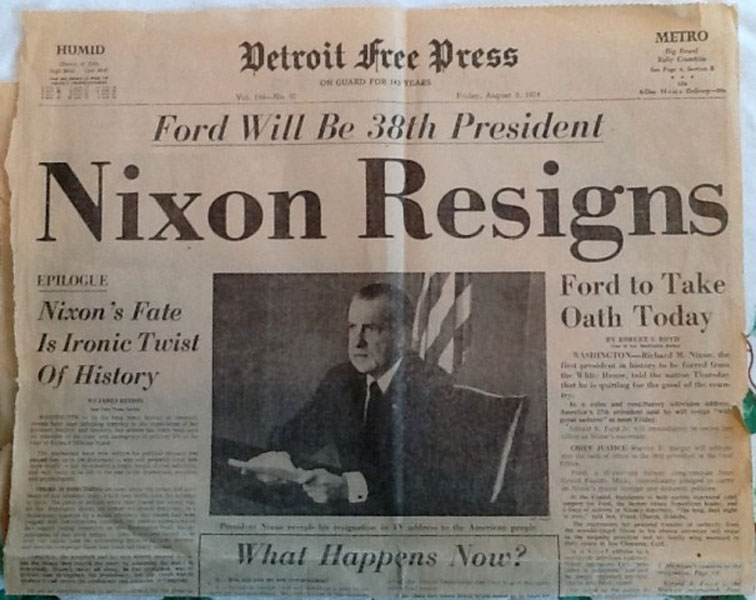 Above: President Nixon’s resignation was the result of the Washington Post’s reporting on the Watergate break-in and the administration’s other illegal activities. The Post’s editors and reporters stood firm in the face of threats and brought down a presidency through their watchdog reporting.

When we talk about a free press, we’re talking about one that is free from bias and pressure from outside sources in choosing editorial content and how it should be written. A free press such as that can be a nuisance for people who do things they don’t want reported.

Frankly, I don’t think Dumas has ever had such a press. In past decades, we’ve had elected officials who ran their offices like kingdoms, using their positions to fatten their bank accounts and tap into public resources to enhance their personal properties.

Many years ago, we had law enforcement officials who created lists of “untouchables”, people in Moore County who weren’t to be stopped and certainly not ticketed. The existence of such a list is more than a rumor. It was real.

In the past, there was a supper club on North Dumas Avenue that was a favorite of the county’s upper crust. But you could get more than a steak there. There was big-time gambling going on upstairs, and the owner of the establishment kept call girls for his friends who required such company. The goings-on there were public knowledge, but the press never reported the illegal gambling and prostitution. The good-ol’-boy system was in full swing in those days, and the local press just winked at it and reported which families spent the weekend skiing in New Mexico or shopping in Dallas.

I’m idealistic. I believe a newspaper, online or in print, functions as the community’s watchdog, and that means holding people accountable. If elected and appointed officials aren’t doing their jobs, the press must report it. If they are attempting to pass ordinances or influence projects solely for personal financial benefit, it has to be reported.

That’s not easy to do in a small town where it’s impossible not to run into the people you’re covering. A reporter for the Dallas Morning News has an easier job of it because he has a bigger city to maneuver in, and running into the people he’s angered isn’t as likely as it is in a smaller city like Dumas.

This week I ran a story about a young man who was arrested on the midway during Dogie Days. Some people took issue with the story, but it wasn’t so much about the young man as it was about our law enforcement officers who are vigilantly looking for people who have warrants. Chief Jim Nelson said the officers are briefed daily on many issues, including who has warrants. An observant officer spotted the young man among the thousands of people on the midway and made the arrest. That was the story. The officer was on the job and not kicking back eating curly fries and clueless about what was going on around him.

A press that is free from pressure is going to tick people off because some people just don’t want the public to know what they’re doing. There are certainly some shenanigans that aren’t newsworthy. I could care less who’s having an affair, unless someone’s civil rights are being violated, and I could care less who’s straight, gay, purple, red or brown. That isn’t news. But when a vigilant police officer is able to spot a young man with a warrant out of a crowd, that’s news. When an elected or appointed official is guilty of mismanaging his or her office, you can bet that’s news. When a police officer stops a drunken driver and then lets him go because he’s a leading citizen or related to one, oh you can bet that’s news.

A news organization that doesn’t print the news isn’t a news organization. It’s a bulletin board that’s controlled by advertisers and an assortment of other people who threaten to do this, that or the other should something they don’t like be published.

The United States has remained free and strong because there have been newspaper people who wouldn’t bow to any pressure. A journalist should never try to win a popularity contest because there can be only one person at any news organization who determines what should and shouldn’t be reported. That person can’t be an advertiser. It can’t be a politician, and it can’t be any one of thousands of people in the community. There must be one person at the paper who stands firm in the face of threats and says, “This story will run.” Period.