Home LIFE + STYLE A boy was facing a not-so-bright Christmas — until he met some... 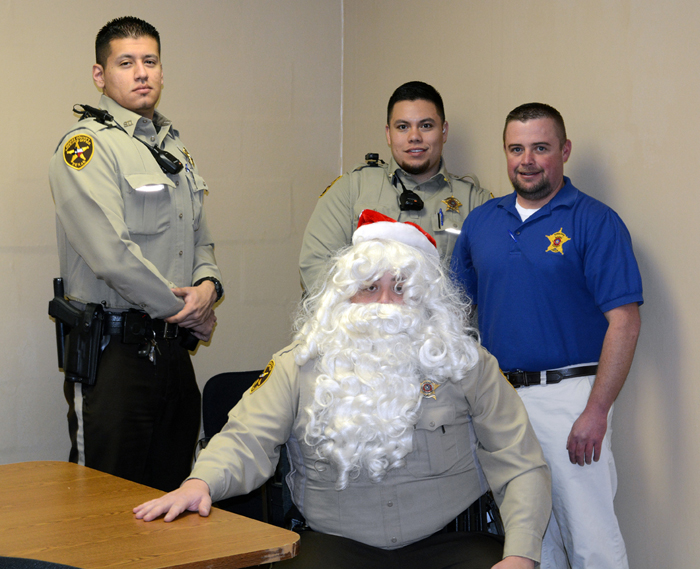 Above: After Moore County Sheriff’s Deputies responded to a domestic dispute, they returned with gifts for the victim’s son, one of them dressed as Santa Claus. From left: Deputy Martin Esparza, Deputy Aaron Porras, Sgt. Colt Farni. Seated: Deputy Santa Claus (Jace Delgado).

Editor’s Note: After Moore County Sheriff’s Sgt. Colt Farni responded to a domestic assault, he wrote this report. The Journal decided not to publish it as written. It’s the perfect combination of a police report written from the heart of a caring law enforcement officer.

On Wednesday, Dec. 9, at approximately 5:38 p.m., members of the Moore County Sheriff’s Officer were dispatched to a residence in Moore County in reference to a domestic assault. When my shift and I arrived at the location, an investigation revealed that a male subject had assaulted his wife. The suspect was arrested for Assault Family Violence and transported to the Moore County Jail.

After the interview, I made conversation with the victim and her son and asked if they had any questions for me. The male juvenile then asked when the suspect would be able to get out of jail. The victim then turned to her son, and with a cracking voice asked, “You’re worried about Christmas, aren’t you?” The respectful young man replied, “No, it’s OK. I understand.”

The victim then looked at me with tears running down her face and said, “He has nothing for Christmas.” This crushed me, and I knew that I had to do something for this child. I then attempted not to let my emotions show as I asked the young gentleman what he would like for Christmas. He only wanted a few things and tried not to show any disappointment in front of his mother. I then had Deputy Martin Esparza transport the two back to their residence.

Once they were back at their residence, I called my shift, Deputy Esparza and Deputy Aaron Porras, to meet me back at the sheriff’s office. When we all came together, I told them about the juvenile and said that I was about to go Christmas shopping. Both Deputy Esparza and Deputy Porras advised they wanted to pitch in. I remembered that Deputy Jace Delgado dressed up like Santa Claus every year for the schools and had a Santa suit.

When we arrived, Deputy Santa Claus stood at the corner of the residence with the gifts as Deputy Porras knocked on the door. When the victim answered the door, Deputy Porras asked if it would be all right if we spoke to her son. She said yes and sent her son out to speak to us. It was at this time Santa Delgado meets with the young man and gave him his gifts. The young man was respectful and so thankful for his gifts. It was a wonderful moment, and everyone felt the true meaning of Christmas

The next morning at shift change, we told the oncoming day shift about the incident. They wanted to take part and do more for the child and his mother. Sgt. Jones briefed Sheriff Bo DeArmond who also wanted to take part and do something for them. They started collecting money for the mother and child from employees of the Moore County Sheriff’s Office. Sheriff DeArmond also contacted the Salvation Army who is also going to help the family. Sgt. Jones contacted Safe Place, and they are also going to do something for the victim and her juvenile son.

Together, the Moore County Sheriff’s Office with the Salvation Army and Safe Place are going to try to give this mother and a child a good Christmas.