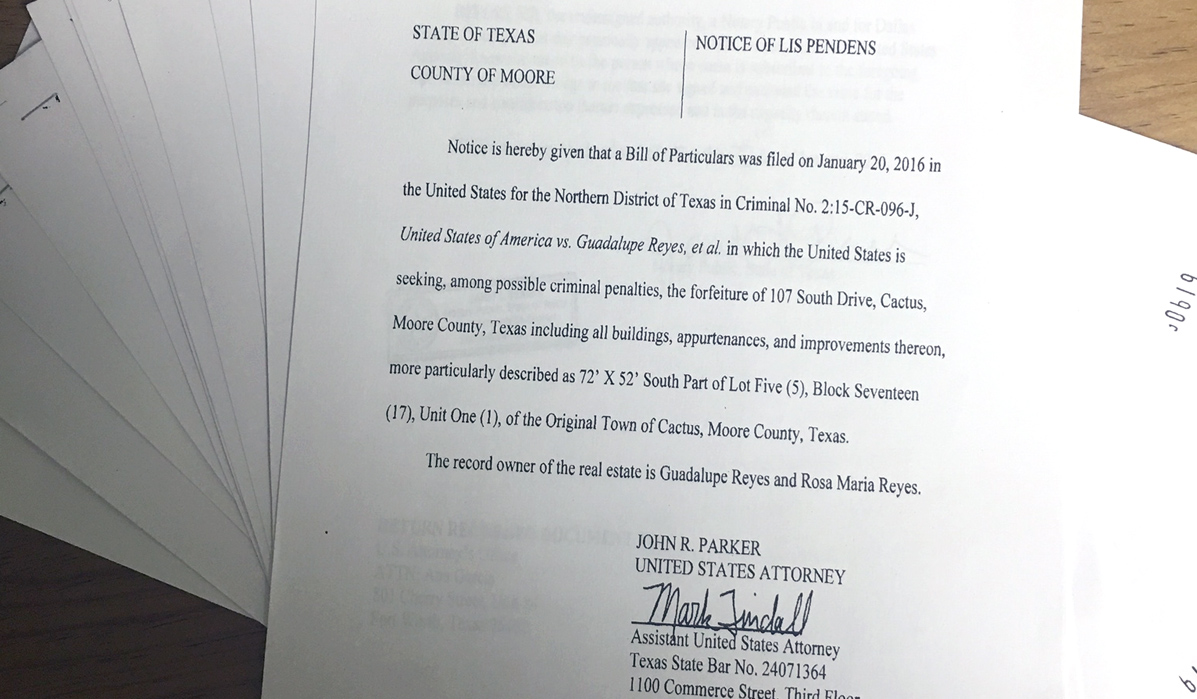 Above: The notices filed in U.S. District Court and the Moore Count Clerk’s office list 10 properties the government says it will take if Guadalupe Reyes is convicted of drug charges.

An assistant U.S. attorney filed notice in the Moore County Clerk’s office that says the government is seeking the forfeiture of properties owned by Guadalupe Reyes. Reyes was arrested Nov. 9, 2015, and is charged with conspiracy to distribute and possess with intent to distribute 1,000 kilograms or more of marijuana.

The notice of lis pendens, filed Jan. 20 in the U.S. District Court Northern Division, lists 10 properties Reyes owns in Dumas, Cactus and Etter. In U.S. law, a lis pendens is a written notice that a lawsuit has been filed which concerns the title to real property or some interest in that real property, according to law.com. It gives notice to the defendant who owns real estate there is a claim on the property, and it informs the general public, especially anyone interested in buying or financing the property, there is a potential claim against it. The U.S. assistant attorney then filed the notices in the Moore County Clerk’s office Feb. 1.

Reyes’ brother, Adan Reyes, also was arrested Nov. 9, 2015, in El Paso and is charged with eight counts that include possession with conspiracy to distribute marijuana and laundering of monetary instruments. The amounts of marijuana listed in the indictment are 100 kilograms and 1,000 kilograms, which has a street value of about $2.2 million.

During Adan Reyes’ bond hearing Nov. 16, 2015, Terrence Moore, who works for the Drug Enforcement Administration and is a witness for the government, alleges Adan Reyes was involved in trafficking marijuana from El Paso to Dumas, and the operation began in 2006.

“Once it gets to Dumas, Texas, his — his brother, who is part of the drug organization up there, would take the marijuana, then disperse that marijuana to their customers in other cities,” Moore testified to questioning by U.S. Assistant Attorney Antonio Franco.

Moore’s testimony, filed in the U.S. District Court Western Division, includes the involvement of several other men in the alleged trafficking, but there’s a hitch. Moore also admits under cross examination by the defense attorney, Erlinda Johnson, the government has no proof other than “cooperators” saying Adan Reyes was involved in the trafficking. The court didn’t allow Johnson to ask Moore how many “cooperators” the government used.

“We’re not going there,” the court said.

During the cross examination, Johnson asked Moore if the government’s case was built on information provided by the “cooperators.” Moore said yes, but he added he would look at police reports “to see if what those — what those sources was telling us was true.”

Johnson: “So let me make sure I understand. The evidence is that you’re relying on what individuals who were arrested told you, right? And the police reports that you then you say you pulled, right?”

Johnson: “Now, these are individuals who are basically trying to get a benefit from the government, right?”

Johnson: “No, do you actually — you don’t actually have evidence of Mr. (Adan) Reyes transporting drugs?”

Johnson: “Now, Agent Moore, you have no evidence that Mr. Reyes was actually involved in the physical transportation of — marijuana, correct?”

Johnson: “And you testified that the money, the proceeds, were then taken, brought from Dumas to El Paso?”

Johnson: Do you actually have surveillance of Mr. Reyes receiving proceeds?”

Johnson: “This is all, again, information that you obtained from cooperators?”

Johnson: “So let me just make sure that we’re clear on what direct evidence you have of Mr. Reyes’ involvement, other than cooperators.”

Johnson: “Any surveillance of Mr. Reyes receiving a shipment of marijuana and coordinating its transportation up north?”

Johnson: “Any information of Mr. Reyes receiving or coordinating the receipt of a shipment of money?”

Johnson: “Any information of Mr. Reyes going to a stash house to collect money?”

The testimony in the detention hearing continued with Johnson building a case to prove the government doesn’t have evidence of Adan Reyes’ involvement in trafficking other than statements from “cooperators.” Franco countered and asked Moore questions to establish the hierarchy in the alleged trafficking operation and Adan Reyes’ position in it. Six other men are included in Adan Reyes’ indictment, and Moore outlined their roles and how he says they transported and delivered marijuana and then dispersed the money, using a money launderer.

After closing arguments, the court ruled Adan Reyes is a flight risk and denied bond. His trial is scheduled for Sept. 19. Lupe Reyes’ trial is set for May 16.